Apathy the biggest killer of diabetics after the average dietitian !

It never fails to amaze me how apathetic most diabetics are, maybe they are too lazy to post or comment on forum or blogs, maybe someone can tell me why. Check this situation out. Over at diabetes.co.uk they ran a poll called “Do you follow any kind of diet” this was open for a month. Of over 70,000 members only 131 bothered to vote. All the members had to do was click a button, but for 70,000 members it was too much effort. When you consider almost all the many arguments over the last five years have been about diet, it makes you wonder, does anyone care ?

I was enthused to see over 50% of the people that voted are either lowcarb or lowcarb high fat, that was encouraging. Also, the much pushed and promoted by a few lowcarb antis, low GI diet only received 7% of the votes. Sid’s much beloved ‘portion control’ (starvation diet) was not an option.

So there you have it, over 70,000 members and a pitiful turn out. Could this be the reason so many healthcare professionals treat diabetics like cannon fodder ? Because so many diabetics think they will get on the case, next week, next month, next year. Could it be many healthcare pro’s at one time worked hard to help diabetics, but got sick of the apathy, and lack of effort by so many to put some effort into improving their health ? 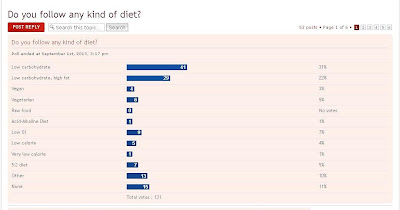 Posted by Lowcarb team member at 09:38

I was quite amazed too at the poor turnout considering how easy it is click the button and how many posts there are on the 3 word story game!

It seems quizzes are more popular these days than diabetes over there.

I imagine very few of the registered members there actually visit the forum any more. I know I don't and I'm sure I'm not the only one to have walked away in disgust about the total anti low-carb BS that goes on there.

Over the years around two dozen members have done a fantastic job for junk food and big pharma. So many people must have gone blind, lost limbs and died, so the usual suspects could push a diet that works for them, but very few others. So many great members have walked or been banned, so that DCUK could build a mailshot list and a potential sale of the site.

I hope the clique are proud of themselves, sadder people are hard to imagine. To gain pleasure and work so hard to confuse and perpetuate the diet of slow death promoted by the NHS, DUK and ADA.

They are addicted to carbs and want everyone to join their junkies club. Fortunately the good news speaks for itself. Almost ALL the good news over the last five years has come from lowcarbers, it will ever be thus.

That's true Jill but as I keep saying many new posters here are lowcarbing.

A few of the old anti brigade are still trying to stifle discussion but they are marginalised and fast becoming irrelevant. Many of the new people don't even seem aware that there have been bitter battles and assume its just crotchety individuals.