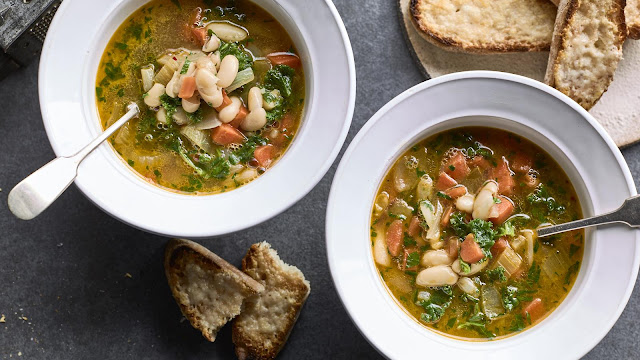 Hard to believe that we are now in the ninth month of the year. Here in the UK the temperatures seem to be dropping slightly and the nights are drawing in; having said that we could be in a heatwave again next week, the weather sure can be changeable sometimes! But with cooler temperatures I thought it would be nice to share a soup recipe, this one is from Angela Hartnett who is one of the most high-profile women in the restaurant world and one of the brightest talents to have emerged on the UK food scene in the past few years. She is a protégée of Gordon Ramsay and was made famous by her appearances on British television.


This recipe suggestion from Angela is for a quick and healthy minestrone soup which uses white beans rather than pasta for extra protein and flavour.

Method
1. Heat a dash of oil in a frying pan over a medium heat. When hot, add the carrots, onion, celery, garlic and chilli flakes. Fry until softened, then tip in the beans and stock. Stir, bring to a simmer and cook for 5–8 minutes, or until cooked through.
2. Preheat the grill until hot. Toast both sides of the ciabatta slices*. Sprinkle with the Parmesan and toast until melted.
3. Stir the kale and parsley into the soup just before serving. Serve the soup in warm bowls with the Parmesan toasts.

Some other soups you may like
Creamy Cauliflower Soup, it's low in carbs - here
Celeriac and Bramley Apple Soup, welcome on a cooler day - here

Dear reader, a variety of articles and recipe suggestions are found within this blog, and not all may be suitable for you. If you may have any food allergies, or underlying health issues these must always be taken into account. If you are a diabetic and not sure how certain foods may affect your blood sugars, test is best, i.e. use your meter.

All the best Jan
Posted by Lowcarb team member at 23:38

...the more veggies the better.

Sounds delicious. It may be a month before we cool off for soup, though I enjoy it all year round.

Temperatures are beginning to cool here, especially in the evenings. Soup is always a comfort to have in the autumn. This sounds hearty and filling.

Minestrone soup is one soup I like with all those veggies

Oh yum! I love soup and we're getting into soup season. Thanks!

Jan - our temperatures have also been cooling off, and it has put me in the mood for "autumn" dishes, so thanks for this one - looks delicious!!

I am a fan of Angela Hartnett (more than of Gordon foul-mouthed Ramsay) and this sounds good. Thank you (and her).

A great soup for the coming seasons... yummy 🍁🌲☕

This is one of my fave soups, yummy! Have a great day, Valerie

Sounds delicious. Funnily enough I made a leek and potato soup yesterday as I felt the need for something warm and comforting.

Sounds very good. But... ohhhhh... do you have any idea how much I look forward to making your Brussels Sprout Soup again? Hmmmm, one of the very, very few good things in the dark half of the year!

I love any kind of soup, yum! Thanks for sharing!
Take care, enjoy your day!

I'm with you about time flying. And the minestrone looks absolutely delicious.

I cannot wait for cold weather (of some degree) and make soup like this.

Soup weather is coming! Yay! This one looks yummy!

It's definitely soup season! I must try some of these, so easy to veganise.xxx

This sounds delicious...I like soup any time, but this would really be wonderful on a cool autumn day.

Oh, I do love a hearty veg soup.

soup weather is almost here and this is a favorite of both mine and the hubs!!