Have you got a few minutes to sit down with a cuppa?
To enjoy these photographs, and more!
Perhaps treat yourself to a low carb chocolate chip cookie - find recipe here 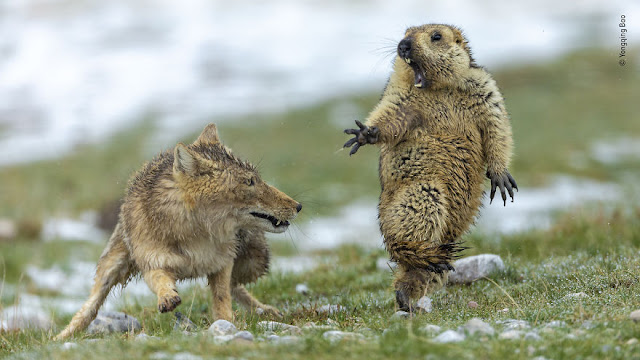 "The Moment" By Yongqing Bao
This Himalayan marmot was not long out of hibernation when it was surprised by a mother Tibetan fox with three hungry cubs to feed. With lightning-fast reactions, Yongqing captured the attack – the power of the predator baring her teeth, the terror of her prey, the intensity of life and death written on their faces.

As one of the highest-altitude-dwelling mammals, the Himalayan marmot relies on its thick fur for survival through the extreme cold. In the heart of winter it spends more than six months in an exceptionally deep burrow with the rest of its colony. Marmots usually do not resurface until spring, an opportunity not to be missed by hungry predators. 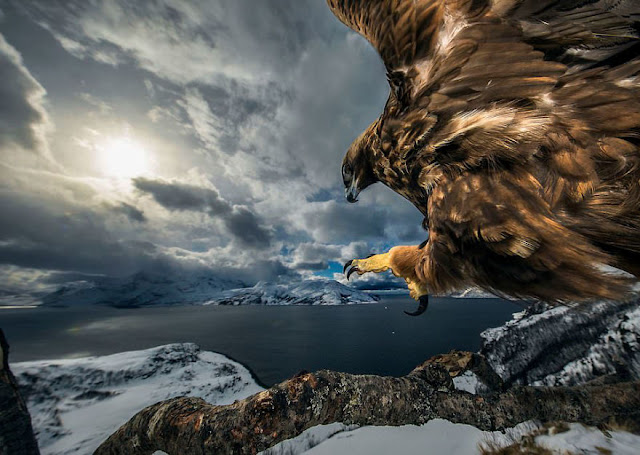 "Land Of The Eagle" By Audun Rikardsen
Audun carefully positioned this tree branch, hoping it would make a perfect lookout for a golden eagle. He set up a camera trap and occasionally left road-kill carrion nearby. Very gradually, over the next three years, this eagle started to use the branch to survey its coastal realm. Audun captured its power as it came in to land, talons outstretched.

Golden eagles typically fly at around 50 kilometres per hour but can reach speeds of up to 320 kilometres per hour when diving for prey. This, along with their sharp talons, makes them formidable hunters. Normally they kill small mammals, birds, reptiles or fish, but they also eat carrion and have been known to target larger animals too. 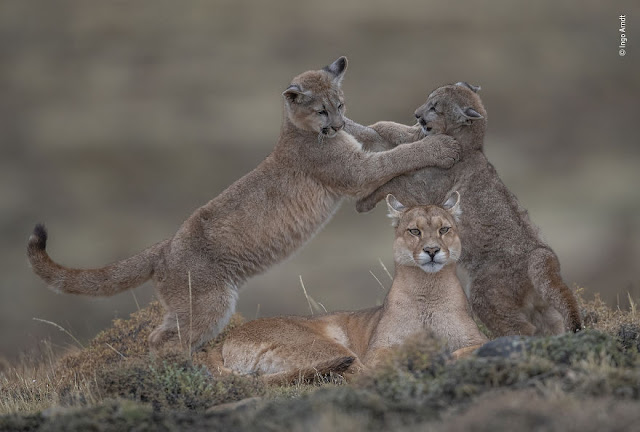 "Portrait Of A Mother" By Ingo Arndt
When you are eye to eye with a wild puma,’ says Ingo, ‘excitement is guaranteed.’ Tracking these elusive cats on foot meant lugging heavy gear long distances, often in freezing temperatures and unrelenting winds. Mutual respect gradually earned him the trust of a female and her cubs, allowing him to capture this intimate family portrait.

Pumas remain playful throughout their lives. Play-fighting teaches cubs vital survival skills including how to hunt, fight and escape. The cubs will stay with their mother for up to two years before gaining independence. They will live a solitary existence as adults until it is their turn to breed.
Have you a favourite?
These and more can be seen here
Wishing you a happy day
All the best Jan
Posted by Lowcarb team member at 00:03

These are amazing Jan! I can't pick a favourite. All of them are so different! I hope the little guy in the first picture, didn't get eaten! Big Hugs!

They are all so good but since I am partial to cats the wild pumas would be my favorite, so cute!

I remember you showed something similar last year. The first one was scary, but the last one warmed my heart.

That eagle photo is superb. Thank you, Jan.

Wow, they are all awesome photos. Have a great day!

I always enjoy the wildlife photos you show. I think these photos illustrate that you have to be a very patient photographer to capture wildlife. Fantastic photos, all three of them, so hard to choose a favourite.

Thanks, Jan. Some of these are especially fantastic!

I wonder how long the photographers had to wait to take these stunning photos. Impossible to choose a favourite.

These are wonderful captures!

Fantastic pictures. It's the next best thing to seeing it in person.

Wow these shots are exceptional. Favorite - the eagle.

The moment caaptured in all its beauty! Stunning photos!

Beautiful and amazing pictures. Love them. Hugs and blessings, Cindy

cute and interesting photos.... thank you for sharing.

Wow amazing pics, once in a lifetime shots to get!

Wonderful photos. The first one is my favorite. Have a good week.

Oh, boy. A horrible start, but I had to laugh so hard - the marmot could be me, like just when my Hubby suddenly turns around the corner (it looks so human, too). He announces when he comes in to give me a kiss, hence.
The photographer sure had a lucky moment!

My goodness, what great photography. What a delight to have captured such amazing scenes.

What amazing photographs! Nature can be very cruel, I'm always on the side of the guy about to get eaten, but then if you showed the mother fox and hungry cubs I'd be rooting for them too x

Those photos are fantastic. Thank you for sharing them.

Capturing these moments is so hard!