A kidney "grown" in the laboratory has been transplanted into animals where it started to produce urine, US scientists say.

Similar techniques to make simple body parts have already been used in patients, but the kidney is one of the most complicated organs made so far.
A study, in the journal Nature Medicine, showed the engineered kidneys were less effective than natural ones.

But regenerative medicine researchers said the field had huge promise.
Kidneys filter the blood to remove waste and excess water. They are also the most in-demand organ for transplant, with long waiting lists. 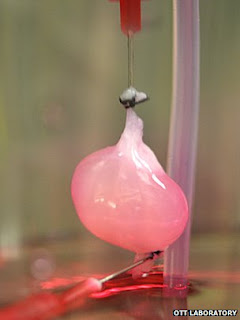 Yet the lead researcher, Dr Harald Ott, told the BBC that restoring a small fraction of normal function could be enough: "If you're on haemodialysis then kidney function of 10% to 15% would already make you independent of haemodialysis. It's not that we have to go all the way."
He said the potential was huge: "If you think about the United States alone, there's 100,000 patients currently waiting for kidney transplants and there's only around 18,000 transplants done a year.

"I think the potential clinical impact of a successful treatment would be enormous."

Kidney failure, brought about by poor blood glucose control, is one of the biggest hazards diabetics face, this could be the start of a life saver for many.

Posted by Lowcarb team member at 13:04

Nothing to do with the topic, but...

1) What have you tried, to treat your diabetes?

2) How bad is your diabetes (OGTT results?)?

Well folks this is very good news to all currently waiting for kidney transplants, it is clearly early days but encouraging.

What's so special! carbo aka Kim Jong-un can grow a belly,chins and an ass with no need for a laboratory.

How do I treat my diabetes ? Well, I prefer to call it, controlling my diabetes. How do you think I do it ? 1. Bags of big pharma drugs and a high starch/sugar diet. 2. Information gleamed from a witch doctors bones. 3. A lowcarb diet and moderate exercise. Answers on a post card.

I have never had a glucose tolerance test.

BTW Was that some sort of threat you made to me at Richards place. “You know what'll happen if you get sarky with me, don't you? Let's not go there again, eh?” I am looking forward to replying to you later.

PS. With your powers of observation, I am surprised you are not top brass in the Police Force.

1) What have you tried, to treat your diabetes?

2) How bad is your diabetes (OGTT results?)?

2) No matter what the OGTT results those of us who have stuck with LCHF over the long term have stopped or reversed the progression. I suggest you read Ian’s experience with a low carbohydrate diet.
he was diagnosed over twelve years ago.

Watching the BBC News at Ten they highlighted this story, alas along with the 'bombings in Boston U.S.' my heart goes out to all in and around Boston, their family and friends, and it may have repercussions for the up-coming London Marathon.
But back to topic, this 'laboratory grown' kidney study does seem like very good news and I sincerely hope the continued research does go well as it will give hope to many.
A good heart lifting story.

Just wanted to add to Grahams comment, I totally agree that Ians experience with a low carbohydrate diet is well worth reading and the other many stories on this blog surrounding peoples own experiences with 'low carbing'

I just wanted to see it here in writing.

I guess I was lucky to completely normalise my OGTT results using supplementation & exercise.

I read My experience with a low carbohydrate diet.

My weight is the same or slightly lower than when I was on a very low carb diet. My last OGTT result was 3.7mmol/L, 2 hours after swallowing 75g of glucose. I felt fine during and after the OGTT.

I'll continue doing things my way, thank you very much.

You said in a FTA post you was nearly a diabetic, I presume you are not and have never been a diabetic, which makes your diet pretty much irrelevant don’t you think. BTW You have referred to ‘supplements’ on more than one occasion, what are these supplements ?

Nigel I had my review today with the DSN and out of curiosity I asked her what the result of my OGTT was when diagnosed in 2008 it was 13.9 mmol/L so no doubt there.

Unlike you I did not need to lose weight, BMI at diagnosis 22.2 so for me it was either HFLC or meds. Five years on LC has served me well medication is limited to one metformin a day and no complications.

What I do have a problem with is maintaining my weight today my BMI came in at 20.6 this is despite upping my calories by increasing fats.

I was a good boy when diagnosed and followed the standard NHS dietary guidelines which kept my weight stable but sent my BG into orbit. My calorie intake then averaged 3000cals as calculated by my dietitian using my food diaries, now on HFLC from my calculations it’s roughly 3500 – 4000.

It appears that at least in a slim diabetic like me and a few others I've come across on forums all calories are not created equal.

"Nigel I had my review today with the DSN and out of curiosity I asked her what the result of my OGTT was when diagnosed in 2008 it was 13.9 mmol/L so no doubt there."

13.9 mmol/L is pretty bad. Why not try some or all of the supplements that completely normalised my OGTT results (from 8.7mmol/L to 3.7mmol/L, at 2 hours post-75g glucose load) with minimal weight change? You know where the information is, so I'm not going to post another link to it.

The information is there. Take it or leave it. I don't care.

What don't you understand about well controlled diabetic for five years Nigel.

I off out for a meal and a pint or five I might get back to you later, unless of course I have one of these Hypo's you reckon lowcarbers are prone too.

When is it going to sink in ? We think your information SUCKS ! You just can’t keep away can you, you have made more comebacks than Frank Sinatra, but Frank had talent.