Latest YouGov polls illustrate clearly, what the people think of the treasonous Prime Minister May and the 500 page draft document for NOT leaving the EU. If May and her quislings get that document through Parliament, it will be the end of democracy in the UK. Eddie 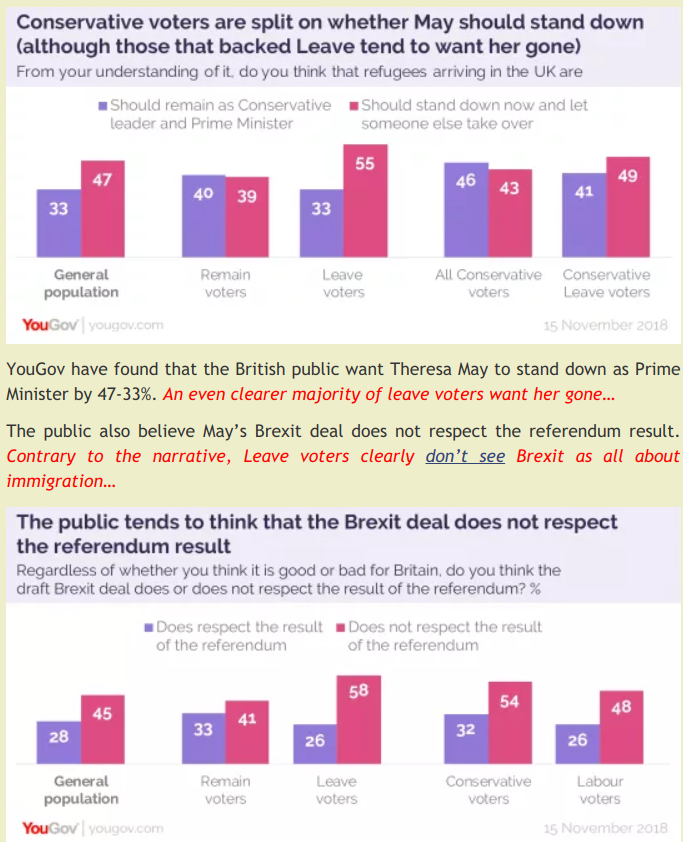 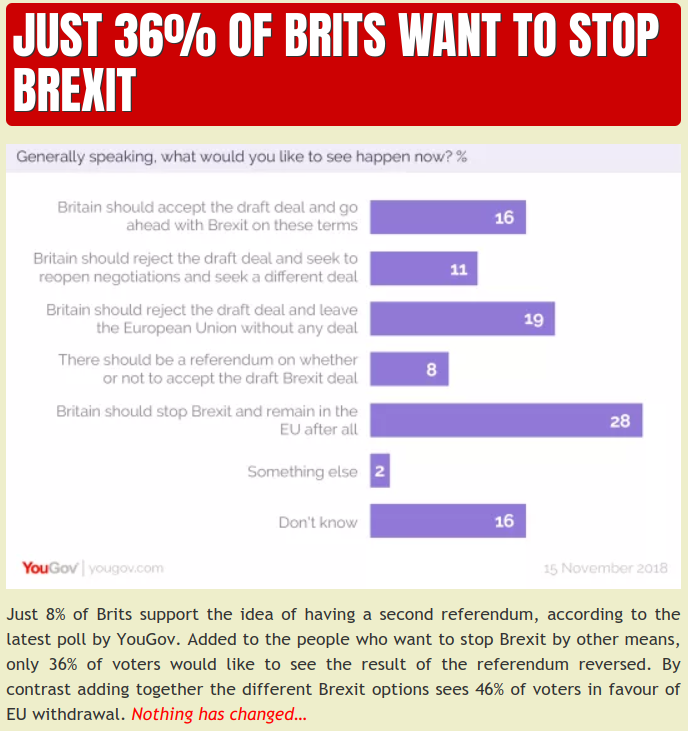 Posted by Lowcarb team member at 17:05

...why do voters vote against their best interest?

That's exactly how empires fall; when parts of a nation refuse to see the broader picture of things.

Those who rejected Trump's election couldn't see that this will make any future reconciliation between the two sides impossible, and thus..fall of the empire should be expected. Russia and China are watching closely, the first step will probably be to replace the dollar as reserve currency.

The brits who are for Brexit, don't see or ignore the issues Europe is facing now; they think only in terms of finance and trade. What about security and demographics? Can you trust NATO and the americans after Obama's 'arab spring' campaign which had as a main result the flooding of Europe with millions of migrants and millions of problems? Can UK be a 'standalone' in the midst of all this thinking she's still the colonial empire? Really...

And on the lighter side - perhaps the new royal acquisition, Megan Merkal will do a better job than Theresa May. She's good: charismatic and manipulative. She might be the best choice for the Brexit job.

DUTA: I could not agree with you more on most of what you have said. It is a sad state of affairs with what the people themselves (yes, I said the people) are creating. As an American, I see what is going on here in the United States and it makes me sick to my stomach! People like to live in their own little worlds unfortunately, and this is the result. I can not speak to Brexit, but I know what I see going on HERE! I live it every day. :(

I wonder sometimes if voters actually know what it is they want.

oh dear Jan what a worry.

I agree with Bill. I wonder that about my own country too.

Seems a bit of a mess from a distance but I don't understand it either.

I still think that leaving the EU is the wrong decision - with many far-reaching and negative consequences!! Why not stay and work out the issues together?

I feel sorry for the British people.
Look at what happened to the Greek people. Or what is in next for us, the "stupid Germans".
The politicians are not the people.
I do vote, but often I ask myself what use it is...
A "Good Luck" won´t help, but that is my wish.

UK should never have joined the EU in the first place. now that the people have chosen to leave, they should leave completely and not have one foot in the EU. smaller nations like singapore are doing just fine being independent.

everything my wife hates

Agreed, George. I have a close friend of many years who lives in Greece and he feels the same way - the Brits should leave the EU for good and so should the Greeks!!!

I hope every UK voter has written to their MP to say whey they think of this "deal". I certainly have (twice this week) and left him in no doubt of the consequences to him and to the Tories. They are finished for a generation if they go through with this affront to democracy.