The Pedal Car Grand Prix is an annual event which traditionally takes place on the second Sunday of July alternating each year between the streets of New Milton and / or Ringwood in Hampshire. This year it took place in New Milton on the same Sunday as the British Formula 1 Grand Prix!

It's a great event, and often attracts around fifty pedal-powered competitors. From juniors to adults. Rules govern the vehicle specifications and team members take turns at powering their creations around the 1- kilometre course; prizes are awarded to winners, and runners up in each of the categories.

What is this crazy event, where competition is fierce, and brings both thrills as well as spills ... but it's all for a good cause.

This years New Milton Hoburne Pedal Car Grand Prix is a charitable event that involves pedal cars of all shapes and sizes racing around the town centre of New Milton. The whole emphasis of the event is to have FUN! The pedal cars vary greatly in design with some very light and aerodynamic competitive cars, whilst others are built to amuse the crowds. Each car has a team of up to four pedallers who can change over as many times as they like, which makes pit lane viewing very interesting for the spectators!

With other family members we went along last Sunday and joined in the fun. Yes, there were thrills and spills but no-one seemed hurt, although some experienced a few grazes, and there were first aiders on stand-by. 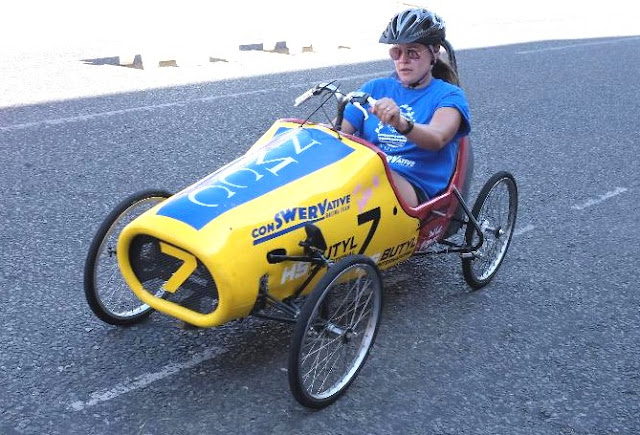 I'm sure all who took part take training seriously, my legs would surely ache with all the pedalling 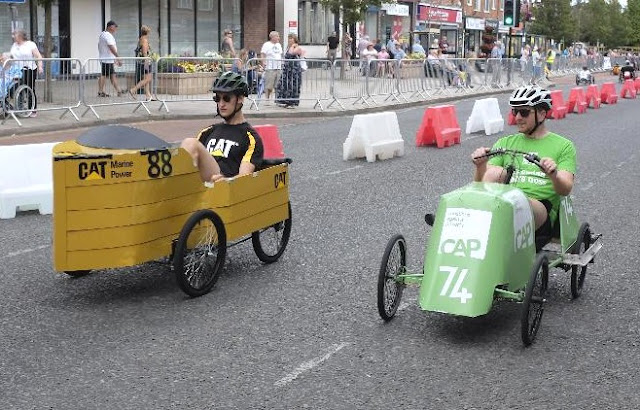 looking quite relaxed these pedallers seem to be doing quite well 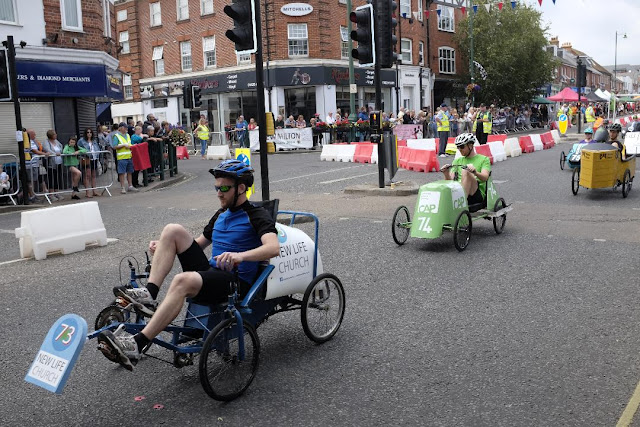 here come some down the high street 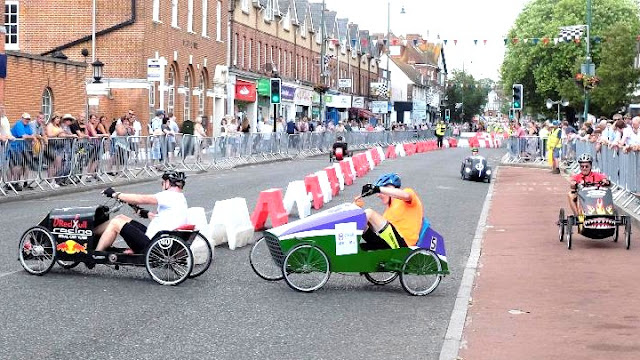 taking the bend wasn't quite so easy, a few spills happened here

Hope you like Eddie's pictures which give a flavour of this fun charitable event. If you click on the photographs it will enlarge them ...

Phew, after all the excitement I needed a cuppa and a slice of low carb lemon cake ... how about you?

All the best Jan
Posted by Lowcarb team member at 11:42

Oh this looks like fun. I love a unique charity event! Luckily there were no serious injuries!

What a fun event. Yes please to the lemon cake.

How fun is that! What an enjoyable post. I also noticed you live in Hampshire. I live in New Hampshire (USA) and Milton is just down the road a bit. I can see where all the original New Hampshire settlers came from with these town names! happy Friday or almost weekend.

Oh WOW...this does look such fun - and in aid of a good cause too! I would have loved to have been there...
and that lemon cake sounds just the thing to accompany the fabulous viewing!!😊😊

Awesome, and fun! Thanks for the photo's; I've never seen that type of race before. :)

Hi Jan this looks like fun,hope you have a lovely day my friend xx

Looks like a blast!!..Hope it's cooler there than it is here..Enjoy your weekend...

This looks like a lot of fun. Neat pictures! Best regards from Seattle, John

It looks more fun than watching the Grand Prix.

That looks like a lot of fun, but I'm not sure how much pedaling my knees could take. (Unless there's lots of long downhill sections...)

Too much fun!!! Thank you for all the great meal and recipe ideas you give us and inspire us to find.

This looks like a great day out, much more fun than F1. Have a great weekend, Sue xx

This sounds like a fun time and great for charity, too. Thanks for sharing photos of this race.

What a good time for lots of people - participants and observers!

Now, THAT was a whole bunch of fun! I enjoyed every single minute of the festivities. Thanks for sharing this exciting event. The photos are awesome, they make the story come to life.

Wishing you a wonderful weekend!

That seems like great fun :) Have a wonderful weekend.

this sounds fun event to watch dear Jan
yes i so enjoyed the images indeed ,so much tell about the event and the excitement :)

i found the cars intriguing ,ofcourse the bent is hard with them
glad you enjoyed the event and then the cake :)

I love this . . . How fun!
The cars are wonderful . . . If Steve wasn't sick, I'd try talking him into building one. Our grands would love it. Why I think this grandma would give it a try too, LOL

That looks like fun!
We have this once a year, but for the kiddies only.

That looks like a fun event for both the adults and children. Fun photos. Have a happy day and a great weekend!

Now that looks like some good old fashioned Summer fun!! How great is that!! Thanks so much for sharing this slice of Americana and thanks for taking the time to stop by!!
Hugs,
Deb

Well this looks like a lot of fun! Entertaining too I imagine. This makes me think of the Little Rascals. Wishing you a wonderful weekend Jan.
xx Beca

Great photos of the 'car races.' ~

oh such fun...nice to know it was a charitable event!!!

Looks like fun, but I would be most content as a spectator! And I'm always in the mood for lemon cake!

That would be so fun to watch or participate in.