"Protecting a patient's eyes may be more heavily influenced by diet than previously thought.

A new study, which analysed data from a pair of previous study populations, found that people aged 55 and over who maintained a Mediterranean-style diet reduced their risk of developing late-stage age-related macular degeneration (AMD) by 41%.


Investigators, led by Bénédicte MJ Merle, PhD, of the French Institute of Health and Medical Research, found their findings supported the suggestion that healthful, nutrient-rich foods including fruits, vegetables, legumes, and fish have a role in the prevention of AMD. 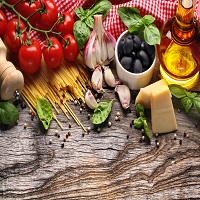 The study analysed the data from 2 previous studies which followed participants in multiple regions in Europe for several years. The first was the Rotterdam study, in which patients aged 45 years and older in the Netherlands were followed more than 21 years, with investigators examining patients and giving them questionnaires about their diets once every 5 years. The study began recruiting participants in 1990. Investigators collected information on a variety of health outcomes, including ophthalmologic, neurodegenerative, and cardiovascular diseases. It also asked the patients about their socio-economic status, alcohol consumption, dietary habits and more.

The second study was the Alienor study, in which patients aged 65 years and older were seen by ophthalmologists every 2 years, beginning in 2006, but only followed over a four-year period so far. Participants in the Alienor study are recruited from the Three-City study, which has been following patients in several regions of France.

Nearly 5000 (n= 4996) participants from the previous studies were included in the current study, 155 of which experienced advanced AMD. The majority of the patients, 4446 (88.96%), came from the Rotterdam study, while the other 550 came from the Aleinor study.

The investigators used the MeDi, a scale designed to assess how closely a person’s diet matches the Mediterranean diet. For example, the scale will attribute a point if the person eats 4 or more tablespoons of olive oil per day. Higher scores indicate a person’s greater adherence to the diet.

Merle and company then compared those that had high scores (6-9 points) with those that had lower scores on the MeDi (0-3.) They found that those who had higher scores had a 41% less chance of developing late-stage AMD. Investigators also checked to see if any individual aspect of the diet, for example eating a lot of fish or a lot of fruit without otherwise following a Mediterranean-style diet impacted the likelihood of developing AMD. None did.

Emily Chew, MD, a clinical spokesperson for the American Academy of Ophthalmology, who serves on an advisory board to the research group conducting the study, recently joked in a statement regarding the study that “you are what you eat.”

"I believe this is a public health issue on the same scale as smoking,” Chew said. “Chronic diseases such as AMD, dementia, obesity, and diabetes, all have roots in poor dietary habits. It's time to take quitting a poor diet as seriously as quitting smoking."


The study, “Mediterranean Diet and Incidence of Advanced Age-Related Macular Degeneration,” was published online in Ophthalmology." 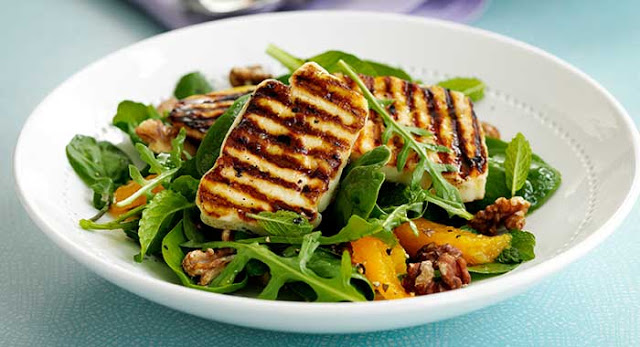 This Halloumi salad with orange & mint, gives you a taste of the Mediterranean
see more details here

Dear reader, you will find a variety of articles and recipe ideas within this blog, and not all may be suitable for you, if you may have any food allergies, or underlying health issues please take these into account. If you are a diabetic and not sure how certain foods may affect your blood sugars, test is best, i.e. use your meter.

All the best Jan
Posted by Lowcarb team member at 20:29

Thank you for the interesting study information. I'm always trying to look at ways to take better care of my vision...

All look so delicious.

Here's to the Mediterranean diet!

Very interesting to read this. Eating the right foods can help us be more healthy and it is most important to look after our eyes. Thank you for the recipe too.

An interesting study. My husband's mother had severe Macular degeneration and my husband is concerned about it for himself. We do eat a mostly Mediterranean diet, so perhaps this will help him.

Our diets affect so many things. For good and for ill.

"You are what you eat" sounds just right.

Looks like everything I love is included in this diet. Good research.

What a delicious looking salad.

I was very amazed when I've seen fried Halloumi, as it's Greek cheese and I thought cheese could not be fried, Jan.
Now I love it!

i loved this piece of great article dear Jan

loved the phrase you are what you eat . i agree totally

Who would have thought!

What a great article, Neil has very slight degeneration so we have to be really aware of this. On a lighter note, anything with Haloumi is good by me! xx

The whole body is interconnected, isn't it?