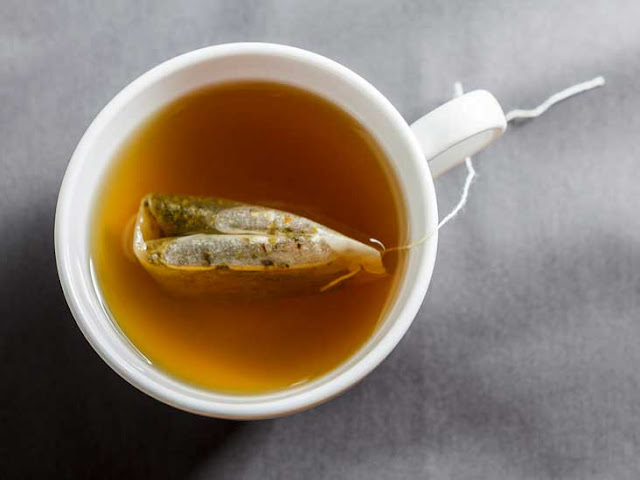 Kris Gunnars BSc writes:
"Green tea is the healthiest beverage on the planet.
It is loaded with antioxidants and nutrients that have powerful effects on the body.
These include improved brain function, fat loss, a lower risk of cancer and many other impressive benefits.

Below are 10 health benefits of green tea that are supported by studies.

Green Tea Contains Bioactive Compounds That Improve Health
Green tea is more than just liquid. Many of the plant compounds in the tea leaves do make it into the final drink, which contains large amounts of important nutrients. Tea is rich in polyphenols that have effects like reducing inflammation and helping to fight cancer. Green tea also has small amounts of minerals that are important for health. Try to choose a higher quality brand of green tea, because some of the lower quality brands can contain excessive amounts of fluoride. That being said, even if you choose a lower quality brand, the benefits still far outweigh any risk.
Summary Green tea is loaded with polyphenol antioxidants, including a catechin called EGCG. These antioxidants can have various beneficial effects on health.

Compounds in Green Tea Can Improve Brain Function and Make You Smarter
Green tea does more than just keep you awake, it can also make you smarter. The key active ingredient is caffeine, which is a known stimulant. It doesn't contain as much as coffee, but enough to produce a response without causing the "jittery" effects associated with too much caffeine. Many people report having more stable energy and being much more productive when they drink green tea, compared to coffee.
Summary Green tea contains less caffeine than coffee, but enough to produce an effect. It also contains the amino acid L-theanine, which can work synergistically with caffeine to improve brain function.

Green Tea Increases Fat Burning and Improves Physical Performance
Summary Green tea has been shown to boost the metabolic rate and increase fat burning in the short term, although not all studies agree.

Antioxidants in Green Tea May Lower Your Risk of Some Types of Cancer
Cancer is caused by uncontrolled growth of cells. It is one of the world's leading causes of death. It is known that oxidative damage contributes to the development of cancer and that antioxidants may have a protective effect. Green tea is an excellent source of powerful antioxidants, so it makes sense that it could reduce your risk of cancer, which it appears to do:
Breast cancer: A meta-analysis of observational studies found that women who drank the most green tea had a 20-30% lower risk of developing breast cancer, the most common cancer in women.
Prostate cancer: One study found that men drinking green tea had a 48% lower risk of developing prostate cancer, which is the most common cancer in men.
Colorectal cancer: An analysis of 29 studies showed that those drinking green tea were up to 42% less likely to develop colorectal cancer.
Many observational studies have shown that green tea drinkers are less likely to develop several types of cancer. However, more high-quality research is needed to confirm these effects. It is important to keep in mind that it may be a bad idea to put milk in your tea, because some studies suggest it reduces the antioxidant value.
Summary Green tea has powerful antioxidants that may protect against cancer. Multiple studies show that green tea drinkers have a lower risk of various types of cancer.

Green Tea Can Kill Bacteria, Which Improves Dental Health and Lowers Your Risk of Infection
Summary The catechins in green tea may inhibit the growth of bacteria and some viruses. This can lower the risk of infections and lead to improvements in dental health, a lower risk of caries and reduced bad breath.

Green Tea May Lower Your Risk of Type 2 Diabetes
Type 2 diabetes is a disease that has reached epidemic proportions in the past few decades and now afflicts about 400 million people worldwide. This disease involves having elevated blood sugar levels in the context of insulin resistance or an inability to produce insulin.
Summary Some controlled trials show that green tea can cause mild reductions in blood sugar levels. It may also lower the risk of developing type 2 diabetes.

Green Tea May Reduce Your Risk of Cardiovascular Disease
Cardiovascular diseases, including heart disease and stroke, are the biggest causes of death in the world. Studies show that green tea can improve some of the main risk factors for these diseases.
Summary Green tea has been shown to lower total and LDL cholesterol, as well as protect the LDL particles from oxidation. Observational studies show that green tea drinkers have a lower risk of cardiovascular disease.

Green Tea Can Help You Lose Weight and Lower Your Risk of Obesity
Summary Some studies show that green tea leads to increased weight loss. It may be particularly effective at reducing the dangerous abdominal fat.

The Bottom Line
In order to feel better, lose weight and lower your risk of chronic diseases, then you might want to consider making green tea a regular part of your life."

The above is only a snippet of Kris's article.
You can read it in full, with related research links etc. here

We bring a variety of articles, studies etc. plus recent news/views and recipe ideas to this blog, we hope something for everyone to read and enjoy.

Please note, not all may be suitable for you.

If you may have any food allergies, or underlying health issues these must always be taken into account. If you are a diabetic and not sure how certain foods may affect your blood sugars, test is best, i.e. use your meter.

All the best Jan
Posted by Lowcarb team member at 00:02

And some green tea is delicious too. Win/win.

Amazing benefits, I should drink more green tea instead of regular orange pekoe.

Thank you, Jan, for sharing this wonderful article!

Very interesting to read. I think I will try green tea soo.

Thanks for sharing this, Jan. I'm going to pick some up next time we're at the grocery store.

I'm enjoying a cup of green tea as I write this :)

Hubby and I are already green tea drinkers.
We give it a big thumbs up!!!

Wonderful information - I am switching to green tea now! Thank you for sharing.

Unfortunately I don't like the taste of green tea. I prefer herbal teas.

I like green tea but I don't find decaffeinated gr tea in all supermarkets.
Time to find it in other places!
Thanks for remind me.
: )

I am with Tom I wish I liked it too, something I could drink would do so much for me, hopefully black tea will be good enough

this was so informative...i am a green tea lover!!

I must confess that I don't like green tea at all. Hugs, Valerie

I don't drink any hot drinks on a regular basis, though I have started drinking tea more often than I ever have done in the past. Green tea is something I've never tried though, but I have got a few sachets to try. I do hope I like it after reading about all these benefits.

Hello Jan,:) Thanks for all the information about the benefits of drinking green tea.

I love to drink green tea. I drink almost everyday. I hope Yeats had some cups of it. Have a nice weekend.

Green tea is one of my favorite drinks...I especially like the one with added jasmine.
I find it really refreshing.
Another great post, thank you so much! ☺☺

I love green tea. My Grandson bought me some for Christmas containing rose petals.
I was very lucky, he bought me a beautiful cup and saucer to drink it from.
Have a great weekend and thank you for so much interesting information.

I've had it on occasion, though I prefer Earl Grey.

I love green tea also Jan.. is there a limit as to how many cups you can drink in a day?

So many benefits! I should start drinking a cup at least every other day. Thanks for all the information!
~Jess

Such wonderful news! I try to have at least one cup of green tea every day. Maybe I should have a few more. Enjoy your day!

Perth Daily Photo (Grace) asked:
I love green tea also Jan.. is there a limit as to how many cups you can drink in a day?

Hello Grace
That's a good question, if you think that the best source of hydration is still water, green tea makes it easy to hydrate with more flavour, without the calories and sugar found in some other drinks, like juice. In general, women need about 9 cups of beverages daily, while men need about 13 cups, and drinking green tea can help you get there.

I am not a medical person, but looking around various articles there doesn't seem to be any specific intake guideline for green tea, and even research into green tea's benefits doesn't paint a clear picture of exactly how much you should drink each day.

However, if you are drinking lots of green tea daily, stay mindful that it does contain caffeine—up to 63 milligrams per cup. Drinking more than 10 cups of green tea daily might have side effects due to caffeine consumption, especially if you have an underlying condition, like liver disease or heart problems.

Also, if you are sensitive to caffeine or suffer from insomnia, more than four cups of green tea will be too much for your system, regardless of the benefits.

For women trying to get pregnant or are pregnant, you should definitely limit your green tea consumption to two cups a day... perhaps skip it altogether.

Do not sip green tea with meals as it may interfere with absorption of iron in your body.

Having said all that, for the most part, though, any moderate consumption is probably fine – so grab a cup or mug and drink up.

The details above were taken from articles on these two links below:

I hope the information helps you decide how many cups you feel happy drinking ...

Thank you for this excellent article, I will definitely be drinking more green tea...

Time for some green tea. I drink green tea fairly often. Makes for an improvement over the other green tea I tried. That green tea turned out to be a mouldy tea bag. Not good.

Thanks for this informative article.

That was a very interesting read - I´ll add this to my daily beverages!

I love my green tea! Thank you!!

I love green tea. Sometimes I put a little honey in mine.