Below is a copy of a thread I placed on this blog 12 September 2012. Within a very short time Noblehead edited out a large part of his post at diabetes.co.uk. It's obvious why he did this. Lowcarb had been his salvation as can be clearly seen from his original post. You will also see how he rubbishes his side kicks post, Sid Bonkers breakfast of corn flakes and toast. You will also see clearly what a two faced duplicitous toad Noblehead is. The $64000 question must be, why does he now not want others to receive the benefits a huge reduction in carbs brought him.


For the last couple of years our Nige has been consistent. He never fails to get involved with the lowcarb debate. He waxes lyrical about the NHS and it’s staff. See a dietition he tells lots of people, see your Doctor, see your diabetes nurse, in short he is a one man public relations outfit for the NHS. Our Nige is also very consistent regarding prominent lowcarb posters. He goads and ridicules them every opportunity he gets. Accusing lowcarb members of lying, then when the thread heats up, he screams I’m being bullied and bellows for the mods. Rubbishing books by Bernstein, Taubes and Kendrick that have helped lowcarbers, dismissing them as “only interested in making money and causing controversy” but then has the stupidity to admit he has never read them.

This post from diabetes.co.uk was posted as a comment on this thread on Saturday. 'Books One mans life saver is another mans doorstop !' it clearly shows what the NHS had done for Nigel. It clearly illustrates what so many members at diabetes.co.uk have stated for years. The NHS lets diabetics down badly. It clearly shows the dietary recommendations are deeply flawed. It manifestly confirms our Nigel is at best a very confused man, maybe a man with very poor memory, is he a total hypocrite ? is he one wave short of a ship wreck ? is he the biggest liar the forum has ever seen ? Make up your own mind, I have. As you can see, Nigel swiftly edited his post placed on the forum three years ago yesterday afternoon. Could it be Nigel realised how ridiculous his antics have been attacking lowcarbers, could he be trying to cover his butt ? Our Nige has been rumbled and he knows it !

Cutting back on the carbs, reducing portion size and eating sensible foods, combined with plenty of exercise has changed my approach to diabetes. I am now eating approximately half the amount of carbs I ate only 3 months back, and at last my weight is starting to drop. Before I started to cut back I was 14st 12lb, and being only 5ft 9'' was well overweight, and my BMI was 31. "
All the text above removed by noblehead  on September 11th, 2012, 5:20 pm, edited 1 time in total.

Click on screen shot for Nigel's much edited post. Swiftly followed up by the low carb king, Fergus. 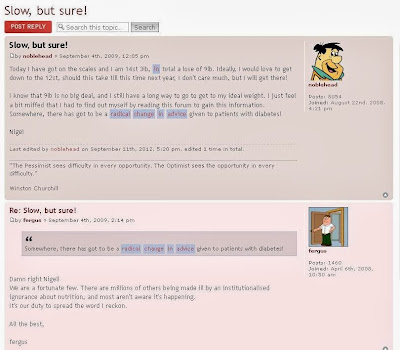 "Damn right Nigel!
We are a fortunate few. There are millions of others being made ill by an institutionalised ignorance about nutrition, and most aren't aware it's happening.

It's our duty to spread the word I reckon."

No way would Fergus have made his comment on what was left of Noblehead's post. Fergus made his comment re the original post before Noblehead removed the praise for lowcarb, and where he had rubbished the standard dietary information pushed by the likes of the NHS and DUK

Posted by Lowcarb team member at 16:43

Did you ever? What a hypocrite. I think I prefer Sid. Pity we can't get this onto DCUK.

The politest expression I can think of is "pulling up the ladder"
I am sure others will express it differently.

I would love to hear his explanation.

If Noblehead had a shred of integrity and honesty he would hide his head in shame. Sadly, he has neither and will continue to lie and spread misinformation. To the clued up and informed it will not matter a jot. But, to the poorly informed and newly diagnosed he has done great damage. What sort of person obtains pleasure out of leading people astray and to the grim complications poorly controlled diabetes can bring.

What a grim life he must have lived to seek pleasure in others downfall.

Eddie how clever of you to divine malign intent.
Perhaps he has revised his ideas , perfectly valid, it's the basis of good science. Maybe he feels that what was once considered low or moderate carb is now considered very high by some people . He wanted to make clear his intention.
Your perceptions always seem to be simplistic; black and white . You stick everyone in a corner, them and us (marcarthyism personified)
who the hell keeps track of peoples posts over several years... a stalker?

Do you not feel that your pronouncements ,might actually reveal some contradictions?

I like the cut of your jib, so rare to find a live one.

“Perhaps he has revised his ideas” Perhaps he could explain to the forum why this has come about. “Your perceptions always seem to be simplistic; black and white .” You have me there Fred. I see diabetes control as good or bad. 93% of type one diabetics never obtain good control of HbA1c. “(marcarthyism personified)” good grief Fred I accuse no one of being a communist, jeez I am so left wing you wouldn’t believe it. Get a grip lad, read my posts.

“who the hell keeps track of peoples posts over several years... a stalker?” I do Fred, for me the fight against big pharma lies, junk food propaganda and their shills is war. I have one keen memory for lies, is that a crime ? And our files on liars and spreaders of misinformation is extensive.

“Do you not feel that your pronouncements ,might actually reveal some contradictions?” Too right Fred as my post proves. Lowcarb antis contradict themselves so often.

It's called Karma Fred, noblehead took great delight in joining in the attacks on LowCarbers so we make no apologies for highlighting just what a hypocrite he is, the same goes for bonkers, phoenix and the rest of the clique.