Are Birds the Reason You Feel Good in Nature?
There have been many studies that show being in nature is good for your health.﻿ Walking in the woods boosts your well-being. Living near trees can help you live longer. ﻿ Being around water can improve your mood.

But when you go for a walk in the woods, what is it particularly about being in nature or being outdoors that makes you feel good? Is it the sights or smells or sounds? A new study finds it might have something to do with the birds you hear while you stroll.

Researchers from California Polytechnic State University analysed how much the natural sounds people hear when their outdoors affect well-being. They found that the “phantom chorus” of birds singing increased well-being in protected natural areas. The study was published in Proceedings of the Royal Society B.﻿

For the study, researchers placed 10 hidden, evenly spaced speakers on two sections of trails in the Boulder Open Space and Mountain Parks in Colorado. They played recorded songs from 11 species of birds including American robins, house finches, and black-capped chickadees.

The speakers were placed in realistic microhabitats for each species in order to be authentic. For example, the speaker broadcasting the song of the spotted towhee was placed near the ground in shrubs where the bird is most often found.

The researchers alternated playing the birdsong for a few hours a day for a week, and then turned off the speakers for a week at a time. They interviewed hikers after they passed through the sections with the speakers.

“The main result is that hikers that heard the birdsong responded to questions that indicated a higher current level of well-being relative to those that did not hear the birdsong,” Cal Poly biology Professor Clinton Francis, who led the research, tells Treehugger.

“With the phantom chorus, we were able to demonstrate that natural sounds have a measurable effect on the quality of hikers' experiences on the trail. That is, hearing nature seems to be important,” says Francis, who is spending the 2020-2021 academic year as the Alexander von Humboldt Research Fellow at the Max Planck Institute for Ornithology in Seewiesen, Germany.

“While the bigger picture of nature's restorative properties is likely to be more complex and involve multiple sensory modalities, our study is the first to experimentally manipulate a single one (sound) in the field and demonstrate its importance to human experiences in nature,” Francis says. “Furthermore, our results underscore the need for park managers to reduce anthropogenic noise pollution, which is not only a cost-effective way to improve visitors' experiences, but can also benefit wildlife as well.” 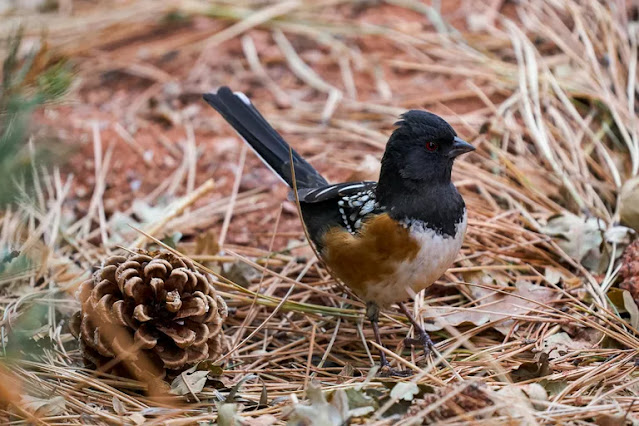 Spotted towhees were recorded for the study's bird chorus : credit M Schmitz
How Nature Benefits People
Francis points out that the findings can be used in several ways to increase human well-being and the conservation of nature.

“I believe that conservation and biodiversity preservation can improve by demonstrating how nature benefits people. The psychological ecosystem services that nature provides is an important way that people benefit from nature,” he says.

“So far, understanding these benefits has been harder because it is difficult to put a dollar amount on psychological ecosystem services compared to ecosystem services like percent carbon sequestered or boosts to fruit tree pollination. Finally, it is also important for individuals to hear how nature experiences can improve their own lives — carving out time each week to be in nature can have a strong and positive influence on people’s outlook on life.”

Words above from original article which can be seen in full with all relevant links here
h/t Marks Daily Apple here
Find out more about the UK birds song here
Out earlier, I spotted a friendly robin, have you seen or heard any birds recently?
All the best Jan
Posted by Lowcarb team member at 21:58

I think it is sights, smells and sounds. There are lots of birds here and I am grateful for all of them - though many of our birds are not songsters.

...I have been working in my d=garden a lot lately and the birds supply some music.

Interesting study and Easy to believe.

Interesting findings, but I think there's more to it than just birdsongs alone. An example would be the way hearing waves rolling in at the beach might bring about the same results. I think it's probably a combo all the senses too. Birdsongs are definitely uplifting no matter what other results would be. :)

A recording for soothing sounds that I use to have was of the forest, and birds.

I so agree with this article, when I get up in the morning and can open the door and can just hear the sounds of the birds singing it is restful and makes for a happy start to my day, and now that spring is here we are hearing all kinds of different noises :) The cardinals have a distinct sound they make when I hear it I always look around and can see them

I know I sure enjoy hearing all the birds chirping when I go for my morning walk. Sometimes it's just me and the birds.

Tommy and I cannot stroll though woods because of mobility issues. But, for his Christmas present I purchased a cd of Birds of Alabama. When we have to wait in the car for whatever, often we are on a street with hundred year old trees. We listened to the birdsongs for the first time, and we were hooked. Now, at least once a week, we put the cd in and listen to the birds. One day, I was tired, leaned my seat back a bit and put a throw over me head to toe and relaxed so, I slept for an hour. Now, we eagerly put the cd in and sleep...lol.

The birdsongs provide a sense of well-being to both of us. But, for me they are a substitute for being in my former home where I often went to the yard and sat in my swing which was turned toward trees. I listened to the birds, lay in the swing, and often slept. The green and birds in the trees provided me with a great deal of stress relief.

Here, it is hard to get into the backyard for both of us, so we are not tempted to sit there!

I have been thinking about bringing that cd from the car and seeing if it will put me to sleep at night.

Think it must be a combination of everything, I am partially deaf so do hear birds but they aren't in the forefront for me, trees, touching and smelling and seeing greenery (hugging the odd tree) is what the woods behind our house offer and I have no doubt they affect our wellbeing. There is a book called The Language of Trees that gives some insight into the fact that they communicate (with each other and therefore quite possibly us at some level).

I love it when I get woken in the morning by the sound of bird song, the best way to wake up ever! Have a great week, Valerie

Getting outdoors can certainly lift my mood, I'm not sure if it's got anything to do with hearing birdsong or not but it does make me smile when I hear a bird chirping away.

Nature is so powerful and healing!

Interesting post! I am always listening for the birds during my walks.
The birds do sound wonderful, especially in the spring. Take care, have a happy day and a great new week!

I totally agree, the sound of birdsong is so uplifting and being outside and enjoying nature in any form lifts the sprits.

I fully agree too...after sitting in my garden for even a short while, I do feel uplifted.😊😊 We are really fortunate here, to have a lot of woodland and common land within walking distance, so there are always many different types of birds who regularly visit our garden.
I love walking in the forest and on the beach too...and birdsong is the main reason I enjoy it so much!
Thank you so much for this fabulous post!😊😊

Hope you are having a good weekend!

I love to listen to birds. I sit on my deck and soak in their sounds. This was an interesting post and experiment to learn about!
~Jess

I so believe this...I love the smells of being in the woods...love the quietness. I have never understood people that go camping out only to have a radio blaring. Not that I don't like loud music when I am housecleaning/vacuuming etc...sometimes...but to get out in nature and have a radio blaring is beyond me. To each his own...

We have robins, and I hear woodpeckers...both the pileated and the red-bellied sometimes, and there are the starlings and sparrows, and sometimes the tufted titmouse And I hear a Carolina wren sometimes...I wish one would come and take up residence here. They are my favorite bird of all time.

We have some really noisy black birds around here but it's fun to hear them. I like watching the hummingbirds.

In my thought being out door is benifitial to one well being.
Coffee is on and stay safe

Bird song is definitely something I find soothing, but I don't have to go to the woods for that since I have so many birds in my garden. While out in nature I also like the rustling of the leaves, the sun and wind on my skin, the different scents and the solitude.

What an interesting study. I never thought of the economic value from the psychological factor of bird songs. It may explain why I like to sit out on my back patio in spring. The birds are singing and more than likely performing mating rituals.

It's a little positive from the lockdowns that we hear more of the birds.

The sound of birds do have a way of raising the spirits.

wonderful sharing dear JAN!
reminded me days i spent back in my village with so many birds around and i cannot forget even after thirty years that how pretty and delightful they were and their chirping uplifted my soul each time
great experiment and expected result ,i agree that when we feel harmony with nature through bird songs it puts pleasant effect on our brain
thank you for great post!

Oh I love listening to bird song, we have a collared dove in the garden that piracoos just for Neil - how he loves it lol. Take care xx

oooooh i thoroughly enjoyed this!! my yard is filled with birds, singing their little hearts out. i do think they add to the appeal of and our enjoyment of nature and the outdoors!!

It's nice to listen to what the birds have to say in their songs. The music is so calming.

I couldn't agree more! The birds have started singing here and singing often. It's such a joy to awaken to that sound!

yes, we love birdsong and you found a nice bird to your post :)

Could be a headline story of the BBC. "Expert researchers tell us something we all knew to be true long ago".

The best thing about our little space is the birdlife we're able to attract :)

I do love watching the birds. And ducks are my favourite :-D