I hear you knocking - but you can't come in !

From time to time we post something completely different, and this story is a little different! What would you do if a swan kept knocking on your front door? 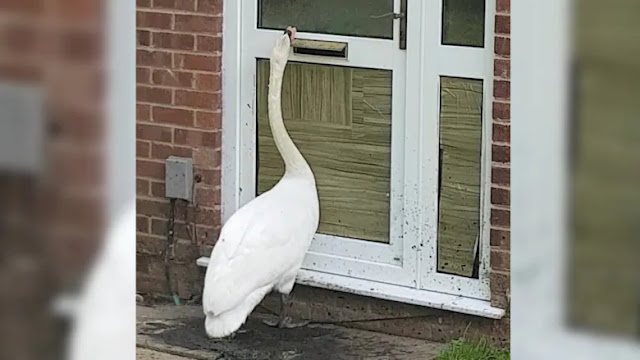 "Stephen Legg isn't sure if the swan that knocks on his door all day really likes him or really hates him.
"I don't know. I'm not sure if swans are personal like that," the 70-year-old Northampton, England, resident said.

"It lives in a lake which is adjacent to the property, and at this time of year, it seems to come and spend the whole of its day tapping on my front door."

The swan in question has been terrorizing the neighbourhood with its persistent door-knocking over the last five years, residents say.

"People call it Percy and Cedric and almost everything else, and I've got a variety of names for it," Legg said.

Percy a.k.a. Cedric seems to have taken a particular liking to Legg's home. It opens and closes the mail slot door like a door-knocker.

"Originally we thought he was trying to sort of pick insects off the glass pane, but I think now he just likes the noise," Legg said. "He can do four or five hours in one go if he's having an off day…. I find it a bit irritating after a couple of hours."

The feathered fiend raps on the door almost every day between March and June, Legg said.

"He doesn't do it all the time because his girlfriend is lurking around as well. And so they disappear and have a swim around the lake, and then he comes back and there's another 10 minutes of knocking on the door."

One year, Legg says he put up a plastic bag to ward off the noisy neighbour, and the bird concentrated its efforts on a nearby house instead.

"But the trouble was, of course, the postman and the newspaper boy couldn't deliver things. So I didn't have any post for three months."

For years, Legg and his neighbours have endured Cedric's antics with little fanfare — until Northampton resident Wendy Howard posted a video of the bird's shenanigans on Facebook, and the story took off.

Now Legg is fielding calls from journalists around the world interested in Cedric.

"It just seems completely remarkable in this day and age that people should be interested in this old swan," he said."

Please see story and video by CBC/Radio-Canada here
On a personal note although I enjoy seeing birds/swans I don't think I would want my door being continually knocked by one, would you?
All the best Jan
Posted by Lowcarb team member at 15:23

What a precious photo! Xo

What a cute story:) I wonder if he's trying to find someone.

What a fun story thanks for brightening my day.

The swan story is amazing, it is kind of funny that the swan is knocking on the door.
If it kept happening I can see the knocking would be tiresome. Have a happy day!

Well, I never! Could be useful at trick or treat season though!!

What a funny story!

Sounds like something that would happen to me with all of my wildlife adventures lol.

Oh dear! First, Thank you for brightening up my day with this fun news! Laughing.
Second, the irritation is sort of sad that a creature has found an unwelcome interest.
Last, somebody somewhere might have fed the swan through a lettebox. Not to worry, somebody somewhere is sketching out a product to sell that dampens the letterbox noise. lol

I'll admit I laughed while reading parts of this, and cringed for other parts. But I also think Stephen Legg has the patience of a saint. => "I find it a bit irritating after a couple of hours." Oh, I would've become irritated much sooner than that! I don't know enough about birds, to figure out why the Swan is doing this, but it's fascinating.

Hello,:=) Animal behaviour never ceases to amaze me. It is sometimes not only annoying but frightening. We once had a blackbird that pecked at the window for a whole year, even at night. It was scary!

I would become irritated much sooner than he does. What a fascinating covid free story. Thank you.

I wouldn't like it much at all. But the photo is priceless.

It would be charming once, but very annoying over time. I wonder what goes on in that little bird brain to cause such behaviour.

That is such a cute story! He can come knocking at my door any day! LOL! Big Hugs!

I know why people are so interested. It's a great human interest story and the word "Covid" isn't a part of it! I think I might tire of it -- but it's also kind of cool!

That's a good story. I'd try to put him in his place.
Good Tuesday. Take care of yourself.
A hug.

I guess he'll do it day and night, he'll go to sleep.

Cute story. Don't think I'd mind a visitor like that.
One of my blogger friends just wrote a post about a white egret that peeks in their window! :)

Jan - a fabulous story that brought a smile to my face - but I am sure I would not be as amused if it was my door for hours on end! By the way, last week I made the recipe for Thai Fish Curry with Coconut Cream - both my husband and son (and I) liked it! It's a keeper!

funny story - we have a woodpecker that taps on our pre-fabricated metal/tin fireplace chimney, it's an irritating sound. it usually starts around 6 am and it goes on for hours. who know, two funny stories in one day!!

I don't know what I would do. Maybe call fish and game. Thanks for sharing this story though. It was interesting to read about.

wow what a story - i would not like that at my door. no way. but it sure was fun to read

It's too bad, with all that media attention that someone can't do something about that swan. I fear I'd be a bit annoyed after about a day! Mr. Legg deserves a medal!

A fun story...I love it. I don't have a swan a-knocking, but I do have my families of kookaburras, butcher birds, magpies and currawongs serenading me daily at my sliding glass door. They get the meat scraps every afternoon when I'm cutting up the meat for my two furry mates' dinner. The latter two(both indoor cats) often sit at the screen door watching their feathered friends. :)

Once or twice would be a delight but constantly would be irritating.

Too funny! Have a great day, Valerie

This is such a fascinating story. Thanks Jan!

That is so amazing!

living three floors up as i do, I'm probably spared this kind of thing. Though we occasionally get herring gulls sitting on our window sills and knocking on the windows

Although I love to watch swans, I would not be happy to have one knocking on my door all day.

HA HA thats crazy...I love birds, but I don't think I would enjoy that knocking and my dogs would be going nutz barking. I had a Mockingbird attack my car for weeks once, I ended up covering it up with a tarp and that did the trick.

I so love this story...sitting here with tears in my eyes. This just strikes me so funny.

that is interesting, I wonder what it is about his home that has him keep coming back, wow that would be annoying, but very curious

Having endured a bush turkey bashing away at my front door I sympathise. These birds are protected in Australia so there is not alternative to suck it up.

Funny! Yet... my cousin at age 5 was bitten by a swan, I don´t go near and would not answer the door!

There is a trio of gray geese that knocks on my door several times a day! One of them is quite mean and has bitten me. You can see their pictures on my blog.

Haha that is mad! I love ducks :-D