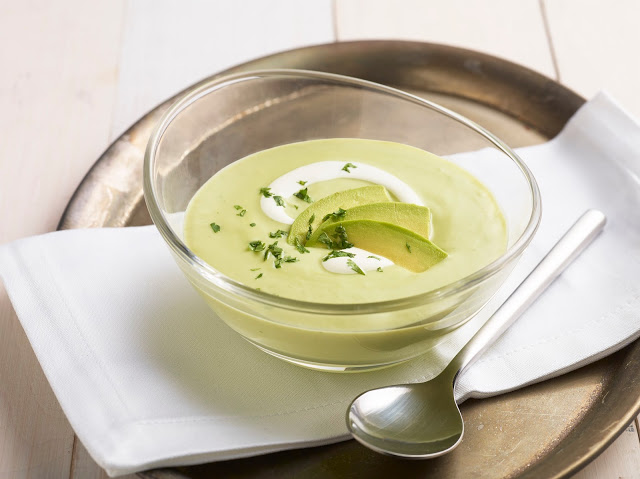 This recipe for a delicious summer soup combines avocado, cucumber and green onion. I have to say that avocado's are one of my favourite foods and they are packed full of good nutrients, you can read more about that here.

If you'd like to make this soup here is what you'll need, serves four:

( If you should need help with measurement equivalents look here )

This is how to make it:
Puree (use a blender) all ingredients until smooth.
Season with salt and pepper.
Garnish each serving with a swirl of yogurt and cilantro.
Serve.

* Large avocados are recommended for this recipe. A large avocado averages 8 ounces. If using smaller or larger avocados, adjust the quantity accordingly.

Did you know ... Cilantro is a herb with wide delicate lacy green leaves and a pungent flavour. The seed of the cilantro plant is known as coriander. Although cilantro and coriander come from the same plant, their flavours are very different and cannot be substituted for each other. (Some countries refer to the cilantro as coriander, so any references to "fresh coriander" or "coriander leaves" refer to cilantro.) It can be easily confused with flat-leaf parsley in appearance, so be sure to sniff carefully. Look for a bunch with un-wilted leaves in medium green. Found fresh year round in most markets.

We bring a variety of recipe ideas to this blog, and not all may be suitable for you. If you may have any food allergies, or underlying health issues these must always be taken into account. If you are a diabetic and not sure how certain foods may affect your blood sugars, test is best, i.e. use your meter.

All the best Jan
Posted by Lowcarb team member at 13:03

Avocado, cucumber and green onion... this recipe is absolutely brilliant! <3

Hello, I have never tried cold soup. I do love avocado but not a fan of cucumber.
Enjoy your day and new week ahead. Happy July!

The only cold soup I eat is called “gaspacho” – gazpacho in Spanish – which is a tomato, cucumber and bread soup. Very appreciated in Portugal and Spain.
I will try this one in the next few days. It has been very hot here.

That sounds refreshing! I´ve never seen Cilantro over here, though! What might be an alternative?

This looks like a very good dish! Thank you!

seem I have to try this one :)

Perfect for a hot day!

I like the flavors in this, I make a cuke one with yogurt

Iris Flavia said:
"That sounds refreshing! I´ve never seen Cilantro over here, though! What might be an alternative?"

Hello Iris, and thanks for your comment and question.

Here are five Substitutes for Cilantro, hope the suggestions may help.

Cilantro, also known as Chinese parsley, Mexican parsley, pak chee, koyendoro, culantrillo, green coriander or coriander leaf, is used throughout the world as a green vegetable and as a seasoning. Cilantro is used to season salsas, stir-fries, curries, soups, stews, meats and salad dressings. The stems, leaves and roots are most commonly used, while the plant's seeds-- caleld coriander-- are also used as seasonings.
If you are interested in cooking a dish that calls for cilantro, you may need to use a cilantro substitute. The following 5 cilantro substitutes can be used in most recipes that call for the herb.

Italian Parsley
Cilantro and parsley are only distantly related, but they are slightly similar in taste and appearance. Consider using classic Italian parsley, curly-leaf parsley or flat-leaf parsley as a cilantro substitute in your favorite recipes. If you'd like, you can add a bit of lemon juice and some ground coriander to make the flavor resemble cilantro.

Papalo
The Mexican herb papalo, also known as papaloquelite, is very similar in taste and fragrance to cilantro. However, it is more pungent and has a much stronger odor. Use 2/3s of the amount of papalo that you would use in a recipe calling for cilantro, or use equivalent amounts if you want your food to have a stronger flavour.

Basil
Basil leaf is somewhat similar to cilantro; both herbs have a slightly sweet and exotic flavor. Like cilantro, basil is strongest when used raw and loses its flavour quickly during cooking. Substitute cilantro for basil in Mediterranean recipes for an interesting flair, or use basil in lieu of cilantro if you dislike cilantro leaf's alkaline flavour.

Celery Leaf
Although celery leaves aren't ofen used as seasonings, they can act in place of cilantro in many recipes. Because of their mild flavor and cilanto-like texture, celery leaves lend a very similar flavor to salsas and stir-fries. Simply purchase celery stalks and use the leaves as cilantro substitutes, instead of throwing them in the trash bin or compost.

Thanks for sharing.
Hugs,
Betsy

looks so cooling and delicious!

Love avocado. Not a fan of cucumber.

Looks so refreshing! Perfect for this heatwave period we're going through.

Sounds delicious! Still, as I am one of those people who cannot taste anything good in cilantro (through I love ground coriander seed) I will always use parsley as a substitute.

I have never had avocado soup but it looks so cool and refreshing.

This sounds and looks luscious.

I don't think I've ever had avocado.

I have never been much of a fan of cold soups, but this one seems like it’s worth a try. And I have both cucumbers and avocados in the house so maybe tomorrow’s the day!

This is tonight's starter. With hot crusty bread though. Sorry Eddie.