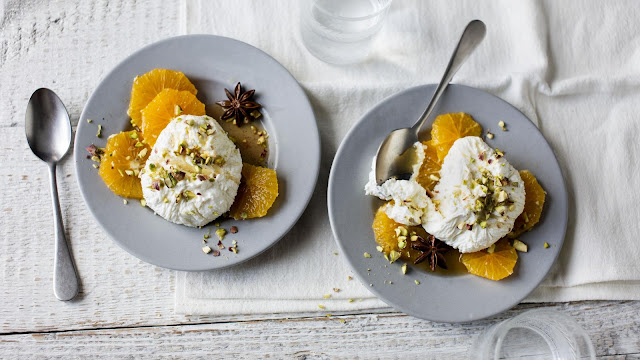 Warm, spiced oranges with labneh
recipe here
Recently, I've come across a few recipes with Labneh in them, but what is it I wondered? Have you heard about it? Do you use it or make it? Well, thanks to the internet and the many articles about it, I now know far more and share this with you.
"Labneh is a soft cheese, similar in texture to cream cheese, made from strained yogurt and very popular in Middle Eastern cuisine. You may see it spelled lebneh, lebnah, labaneh, labane, labne, or labni. It has about half the fat and calories of standard cream cheese. Though traditionally made from cow's milk yogurt, it is possible to turn some non-dairy yogurts such as coconut and soy into labneh.
Origin: Middle East and Mediterranean
Texture: Soft and creamy
Availability: Increasingly in stores but very easy to make at home
Uses: In recipes in place of cream cheese or as a snacking cheese

What Is Labneh?
The primary ingredient in labneh, is yogurt, and is itself a common ingredient in Middle Eastern cuisine. It may be served as an accompaniment to breakfast or as a snack with fruit or stirred into cooked dishes instead of sour cream or milk. Labneh results when the whey gets strained out of yogurt, leaving a thick, creamy, not-quite-firm cheese-like substance that can be used as a dip, spread, or stir-in ingredient. Labneh pairs equally well with sweet and savoury flavours, and it makes a cooling accompaniment to spicy dishes as well. You can buy it in specialty gourmet and Middle Eastern food markets, and increasingly in some grocery stores, but it's actually quite easy and less expensive to make at home with just a couple of ingredients and a few common kitchen tools.

How Labneh Is Made
Making labneh involves stirring salt into good quality full-fat plain yogurt, preferably the Greek variety, and then straining it through cheesecloth until it reaches the desired consistency. Tie the cheesecloth into a ball and set it in a sieve over a deep bowl; after about half a day to a day of straining in the refrigerator, the labneh reaches a soft state perfect for dipping. Just drizzle on some good olive oil, sprinkle on some za'atar, and grab the pita bread. The longer you let it strain, the thicker the labneh becomes—until it eventually reaches the texture of a block of cream cheese.

Substitutes
You can use yogurt, cream cheese, sour cream, or mascarpone in place of labneh for many uses, but the flavour and texture won't be quite the same. Once you familiarize yourself with the flavour and versatility of labneh, you're more likely going to want to swap it for the others whenever you get the chance.

Uses
Labneh can be used in any way you would normally use cream cheese, such as a spread on bagels, as a baking ingredient, or as a dip for your favourite fruit and vegetables. Despite its similarity to cream cheese in texture, however, labneh adds the tang of yogurt, which cuts the richness and gives it a refreshing taste.

Roll labneh into 1-ounce balls and marinate them in a jar of olive oil, za'atar, and herbs such as oregano. You can spread them on toasted bread, toss them into a salad, or add them to a dish of hot pasta the way you would balls of fresh mozzarella or burrata. Labneh does not curdle at high temperatures, making it particularly useful for cooking.

You can use labneh for a lighter version of cheesecake, as the base for a dip, or as a swap for sour cream. Or stir in some pomegranate arils and honey for a light and refreshing breakfast.

Storage
Store labneh in an airtight container in the refrigerator for up to a week. To make it last longer, completely cover the surface with olive oil; it can stay good for a couple of months if it remains submerged. Rolling it into bite-sized balls first makes it easier to pull out single servings without exposing all of the labneh to air. You can also freeze it in an airtight container with no airspace for up to six months; let it defrost slowly in the refrigerator to minimize textural changes or set the container in a bowl of cool water to speed up the defrosting. Don't try to defrost the labneh in the microwave, as it can separate.

Labneh Recipes
Follow the Middle Eastern tradition and roll labneh into balls for marinating or use it anywhere you need soft, spreadable cream cheese."
Words above and more from here
Labneh is high in protein and low in lactose, more to read in article here 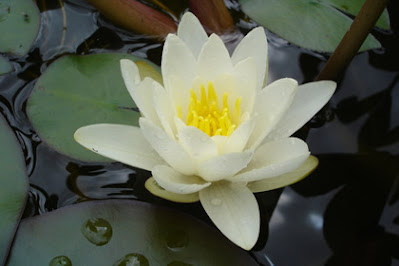 a beautiful water lily
one of July's flowers - see here
You will find a variety of articles, studies etc. plus recent news/views and recipe ideas within this blog, we hope something for everyone to read and enjoy. Please note, not all may be suitable for you. If you may have any food allergies, or underlying health issues these must always be taken into account. If you are a diabetic and not sure how certain foods may affect your blood sugars, test is best, i.e. use your meter.

All the best Jan
Posted by Lowcarb team member at 00:25

I recall my mom, heating up oranges, but I think only thing was on them was salt.
Coffee is on and stay safe

I have never heard of it before.

I sometimes eat labaneh wrapped in a fresh, big pita, and usually sold by druze women at the market. Not bad, but I wouldn't bother to make it at home.

It sounds just wonderful. I love middle eastern food. I would love to try this out if I can get the cheese somewhere here. Thank you for your post. So interesting. All the best to you too dear Jan❣️

It is new to me, sounds great.
Take care, have a happy weekend!

I never heard of this cheese, but I bet it adds a nice exotic taste. Thanks for sharing this info.

I make my own yogurt and lebanay all of the time it's delicious. 😊

I sure learned a lot in this interesting and informative post. Can you believe I had never heard of Labneh? :-) Thank you, Jan, for this post and for your recent kind comments on my blog. Best regards to you and Eddie. John

New to me. Sounds intense to make, too. I will wait until someone invites me, but I do appreciate the knowledge. xo

No I've not heard of it, interesting.

No, I've never heard of this cheese. Will have to check it out!

I've never heard of labneh but it does look delicious. Water lilies are one of my favorite flowers.

Have a nice weekend ! Greetings Caroline

Labneh sounds good, I've heard of it but never tasted it. It sounds easy to make, I should try it one of these days!!

I have never heard of this cheese and now have to look for it. My husband and I finally tried Halloumi for a first time a few weeks ago and are obsessed with it!

This is new to me, Jan. I don't even know where I could find it and I don't know if I'd make it -- but sometimes one is up for a challenge!

I have never heard about it before!

Never heard of it but would certainly give it a try..

Thank you for introducing me to something new today! Big Hugs!

very nice recipe thank you to writing such a great article.