It is the first time that one of the “clinical commissioning groups” (CCGs) set up to implement the proposals has formally expressed its opposition to the Health and Social Care Bill.

The criticism, from the CCG in Tower Hamlets, east London, is led by the senior GP who hosted Andrew Lansley’s first speech as Health Secretary.

Yesterday Mr Lansley had to cancel an appearance at a local government conference to answer an emergency question on his reforms in the Commons.
During the heated debate, Mr Lansley received only minimal support from Cabinet colleagues in the chamber. Mr Clegg was among most senior ministers in remaining absent from the front bench. 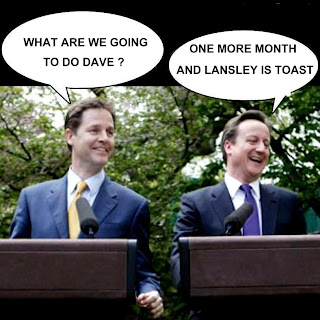 Posted by Lowcarb team member at 10:02