Roquefort Cheese - Did You Know ?

Roquefort, classic blue cheese made from ewe’s milk, often considered one of the greatest cheeses of France. The designation Roquefort is protected by French law. Roquefort is one of the oldest known cheeses. First evidence of Roquefort was discovered in 79 A.D. when Pliny the Elder mentioned its rich aroma. It was reportedly the favourite cheese of the Emperor Charlemagne. Roquefort is made exclusively from the milk of the red Lacaune ewes that graze on the huge plateau of Rouergue, Causses in the Aveyron.

Roquefort cheese is widely imitated throughout the world, and its name is used rather indiscriminately on processed cheeses and salad dressings. True Roquefort is noted for its sharp, tangy, salty flavour and its rich, creamy texture. Today some authentic Roqueforts are made in Corsica, but all still undergo final aging in the limestone caves of Roquefort near Toulouse in southern France, where the cool and humid atmosphere promotes growth of the mold Penicillium roqueforti. It was back in 1411 that King Charles VI gave rights to the ageing of Roquefort to only one village, Roquefort-sur-Soulzon. Nowadays, Roquefort cheeses still mature naturally in the same caves of this village for a minimum of 4 months, although today, the mold is mostly produced in laboratories to ensure its consistency.

By French law, only cheese that is processed at Roquefort, France, may be labeled “Roquefort cheese”; other French blue-veined cheeses are called “bleu” cheese.

Roquefort is generally formed in 5-pound (2.3-kg) cylinders of about 7-inch (18-cm) diameter and 4-inch thickness. The white paste of the interior is marbled with blue mold; A genuine Roquefort has a red sheep on the label ...  the cheese is wrapped in foil bearing a traditional insignia of red sheep.

Above words and picture from here and here

Roquefort - The Cheese and The Village.

Imagine, discover, taste and savour ...
One of the entrances to the Causse du Larzac south of the Massif Central, Roquefort is nestled at the foot of the Combalou cliffs and jealously guards the secret of the King of cheeses.

A site to discover that will awaken all your senses...

Located south of the plateau of Larzac, Roquefort-sur-Soulzon, home of the famous cheese is an iconic site tucked away in the heart of a totally unspoiled environment. This land has drawn its wealth from its rich geography for centuries. It required a mountain to collapse in order for the network of underground cracks to form the "fleurines" whereby the caves are naturally ventilated. 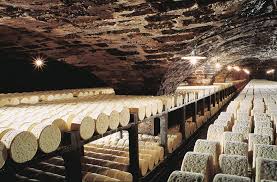 Exploring the caves, you will discover an ancient tradition - no less than the secrets of making the King of cheeses! Let us guide you as you taste and learn about the unique flavour that makes our cheese the highest ranked FrenchAppelation d'Origine Controléé. Sharpen your senses and prepare your taste buds - a visit to the cellars of Roquefort invites you to share what the region values most highly.

The village and its history.
The Story of Roquefort:
A small village with one single street, lives to the rhythm of of Roquefort cheese. Its identity is revealed through many testimonials and stories.

A walking tour with photography and sound takes you to selected places revisited by the school children of Roquefort as part of an educational project to evoke the history of the cheese capital of the world.

A unique geological heritage site.
Don't leave Roquefort without having walked one of three themed walking trails: the Ladder Trail, the Mushroom Trail, and the Menhir Trail, each with its own unique character. Signposts and information posts about the geological characteristics of the site guide your steps, while you take in the perfectly preserved landscape around you.

Arranged in superposed levels, the caves are ventilated by fleurines (natural galleries) that maintain a constant temperature all year round, from 8 ° to 12 ° C and a humidity of 95% due to infiltration of water through the scree. The Roquefort refines slowly in this environment composed of stone and wood. You can visit the refining caves all year round to discover the mysterious world of the King of Cheeses. You can also buy the produce in one of seven specialist shops.

Have you visited Roqufort and the caves? Would you like to visit?

Think I may be buying some next time I'm shopping...

Thanks for reading, and I hope you've enjoyed this article.

All the best Jan
Posted by Lowcarb team member at 08:56

I love cheese... however; I never aquired a taste for blue cheese, I know many people who adore the flavor of this cheese. I also know and have heard the wonderful qualities of this cheese and oftened wished I liked it so I could consume it. But I never found the taste for it.... ♡ xox

It is my favorite cheese.

Interesting. I do love Roquefort and other bleu cheeses. In fact, I love most cheeses and loved the local WI ones when we lived there. By far my favorite cheese is buffalo mozzarella. Oh so good with summer tomatoes.

Hi Launna, and thanks for your comment. Perhaps blue cheese is a little like 'Marmite' people either love it or hate it. Well perhaps hate it is too strong a description. We can't all like every food can we?

Hope you found the article interesting ... and go on enjoying your favourite cheeses.

Hi Galina, and thanks for your comment. As this is your favourite cheese hope you found the article an interesting read .

Hi 'NC', and thanks for your comment. I'm glad you found this an interesting article. Have to say I also enjoy mozzarella with some tasty tomatoes.