Why the DUK BDA ADA and many other organisations promote the carb up and shoot up diet of slow death. 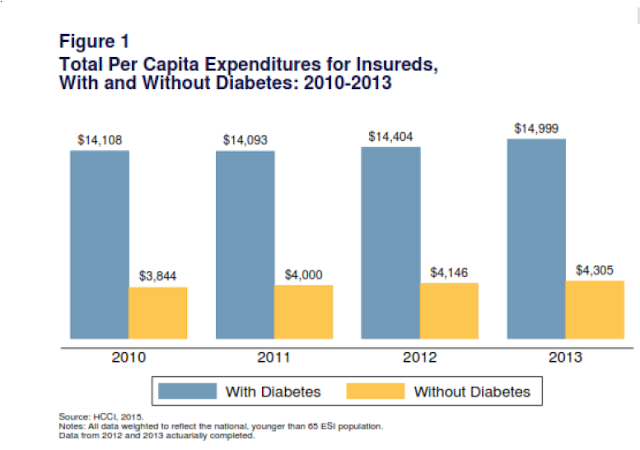 "It now costs $10,000 or more per person annually to treat someone with diabetes than someone who doesn’t have the chronic disease, according to a new analysis of large insurance company claims data.

It's becoming common knowledge around the world, the diabetes epidemic is coming close to bankrupting healthcare systems. The NHS say diabetes is costing the system in the UK over £10 billion pounds per year. It is is also becoming common knowledge, a low carbing diabetic (insulin using) can reduce insulin use drastically. Many talk of reducing injected insulin down to a third of previous use, by low carbing. Many low carbing type two diabetics report excellent control with no diabetes medication required. Some type two diabetics use an out of patent drug called Metformin, cost to the NHS a few pounds per month. The bottom line, a massive amount of money could be saved if all diabetics followed the low carb lifestyle.

At this stage you may be wondering why the NHS and the largest diabetes charity in the UK Diabetes UK, promotes a diet that ensures a high dependence on expensive medication. We now know the saturated fat scare from healthy natural sources was a con. We also know there is no such thing as an essential carbohydrate, not that I am saying a low carb diet should eliminate all carbohydrates, just the carbs that raise blood glucose the highest and fastest, such as bread, pasta, rice, potatoes, etc. the foods DUK et al tell us should be the basis of every meal. OK it's obvious what this post is leading up to.

With so many big pharma and junk companies funding organisations such as DUK and individual high profile dietitians within the BDA, is it any wonder they promote the carb and shoot up method of diabetes control. This method has failed diabetics for years, as evidenced by the lamentable audited NHS diabetes statistics published every year.

Check out any diabetes forum and many blogs, and you will see the fantastic improvement a low carb diet brings about in diabetics, the cost saving are massive. Not only in money but also the misery diabetes complications cause. Always remember when taking advice re. diet from the DUK and BDA, it is your eyes, kidneys and limbs that are at risk, not theirs, to them it's a job.

Note. Good diabetes control is below 6.5 HbA1c excellent control is below 5.5. These numbers are almost always obtained by way of a dietary lifestyle change not promoted by the NHS, DUK, BDA, ADA and many other organisations. The choice is yours. Do you take advice from diabetics who have years of safe, often diabetes medication free excellent control, or the advice from the professionals, who have clearly failed. I took the advice seven years ago from very well controlled diabetics, it's my opinion you should do the same.

"If you find a whole group of patients who feel that their condition is not being treated well, and you band together to get the medical profession to think again, you will run up against a brick wall. You will simply be written off as cranks, and dismissed. The priesthood does not take kindly to being exposed as wrong."

Posted by Lowcarb team member at 10:57

Diabetes is so prevalent in our society. Good points Jan. Happy Sunday. Hope the day shines in every way for you.

I think it is terrible how the huge phamacuetical companies get away with the lies they tell to keep themselves in business. I have been lucky (blessed) not to have this disease. However; I have good friends who just haven't been able to make the change in their diet and that is sad... I hope I never have to rely on drugs to keep me 'healthy'....

It is very hard to get people to tell the truth, when keeping their job means telling lies.

How many sleep is beyond me.

Many thanks for your comment ... it is true diabetes is prevalent in so many countries.

We have found that by choosing foods with reduced amounts of carbohydrates, and not eating foods such as potatoes, rice, pasta have been very helpful to improved health. That is why we speak so highly of the LCHF lifestyle.

...I have had a Happy Sunday, thank you. It was a lovely sunny day in my part of the UK.