5 Takeaways from the Diabetes Drugs Investigation

All 30 diabetes drugs reviewed for this series were approved by the U.S. Food and Drug Administration from 2004-2013 based on surrogate measures of elevated blood sugar such as HbA1c, which can indicate risk for type 2 diabetes complications, but not always. Here are a few key points of what we learned in the course of our investigation. Read thefull analysis, an examination of adverse events, or more about how we did it.

1. Diabetes drugs improve lab tests, but not much more, particularly in pre-diabetics.
None of the 30 diabetes drugs approved by the FDA in the last decade have rigorous proof of reducing clinical outcomes such as heart attack, stroke, blindness, or amputations.

2. Physicians and drug makers have reported diabetes drugs as the "primary suspect" in thousands of deaths and hospitalizations.

At least 3,300 deaths and 20,000 hospitalizations have been linked to new diabetes drugs in adverse event reports submitted by clinicians and pharmaceutical companies to the FDA since 2004.

FDA's Adverse Events Reporting System (FAERS) collects case reports from healthcare providers, pharmaceutical companies and the general public. These are the reports that were used for the MedPage Today and the Milwaukee Journal Sentinel analysis.

Although the FAERS database is known to be incomplete, it is one of the few tools to monitor risks for drugs already approved. (For full discussion of methodology, see howMedPage Today/Journal Sentinel conducted the analysis.)

Reporters reached out to the drug makers. All who responded cited the limitations of the FDA's reporting system and said they monitor reported problems. 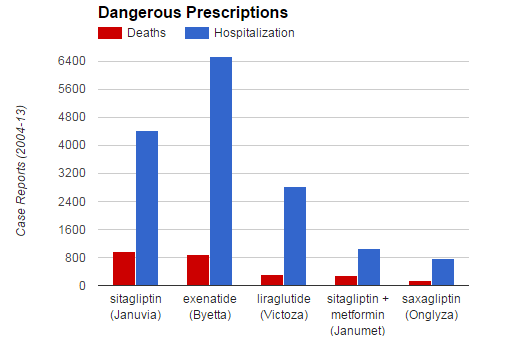 The physicians in the American Association of Clinical Endocrinologists and American Diabetes Association panels that have presided over changes in defining pre-diabetes and diabetes or patient treatment guidelines received more than $2 million for consulting and speaking activities for diabetes drug manufacturers:

Posted by Lowcarb team member at 22:11

The more I learn about drugs, the more I am a believer in eating REAL food for medicine.. - http://www.domesticgeekgirl.com

Another example of a failure when a complex body system is micromanaged with foreign substances.

It's the ACCORD effect all over again. Tell people whose carbohydrate metabolism is broken to "eat more starch" then use heroic amounts of medication to drag the BG back down again, but to nowhere like safe levels. To do this requires the generation or injection of huge amounts of insulin which is a danger in itself.

A combination of low carb, exercise, fasting or metformin when necessary reduces the insulin resistance and hence insulin levels along with the BG. Drugs used to fine tune this process may be necessary in minimal quantities. Of course this is not profitable.