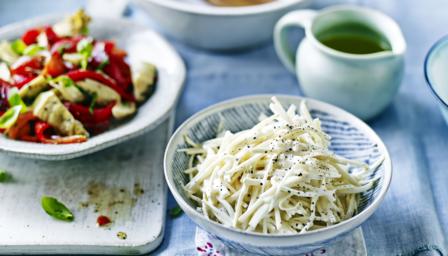 Mary Berry is surely one of the best-known and respected cookery writers and broadcasters in the UK. She has been a judge on 'The Great British Bake Off' since its launch in 2010. She has published more than 75 cookery books, and I first 'discovered' her back in the 1970's when I was given a copy of her first ever book " The Hamlyn All Colour Cookbook ". It was an invaluable read for me and stood proudly on my book shelves ... I so enjoyed trying the many recipe idea's Mary showed.

Of course Mary's career has spanned decades, can you believe she was born in 1935 ... by my Math's that makes her 80 yrs.

She started her career as cookery editor of Housewife magazine and later moved to Ideal Home magazine. Since then she has presented and appeared as a guest in countless television series, but of course she is so well known and loved for The Great British Bake Off. However, just recently she has also been a judge on the  American edition / version of this popular Baking competition called "The Great Holiday Baking Show".

Mary so often describes her cooking style as 'family' - practical, healthy recipes that incorporate lots of fresh ingredients. In June 2009, she was presented with a Lifetime Achievement Award by the Guild of Food Writers. In the 2012 Queen's Birthday Honours,  Mary was awarded a CBE (Commander of the Order of the British Empire),for services to culinary arts.

This recipe I share today is one of the simplest salads you will ever come across, It's great as a starter with charcuterie or smoked fish, works perfectly as a side dish, or serve with some leaves for a healthy light lunch. Even in the cooler winter months I think something like this can make a very refreshing change ... and celeriac is a low carbers delight!

Preparation method:
1. Put the celeriac in a bowl and cover with approximately 100ml/3½fl oz cold water. Add the lemon juice. Toss well to prevent it going brown.
2. Mix all the dressing ingredients together and season with salt and pepper.
3. Drain the celeriac, toss in the dressing and leave to soften for 30 minutes before serving.

Tip:
For the best results, use a mandolin to slice the celeriac into matchsticks. However, if you’re pressed for time, a food processor gives good results. Use the largest grating attachment to give a coarse grating, rather than matchsticks.

All the best Jan
Posted by Lowcarb team member at 08:59

The simplest recipes are often the best, aren't they?

I'm a huge fan of Mary Berry. I love her twinkling and kind blue eyes as well as her culinary expertise. The US version of the baking show is terrible. Seriously? We couldn't find more talented bakers in all of the US? But I still watch it to see Mary.

'NC'
Mary Berry has a lot of fans and I do agree with you, she does have twinkling and kind blue eyes. She clearly enjoys what she does, and passes her knowledge on to the many fans who watch and buy her books.
Sorry to hear the US version of the show isn't too good ... that's a shame.

Many thanks for your comments

I have been seeing a show with Mary Berry being advertised lately. I will have to check out her show. Thanks for sharing the recipe. Enjoy your day and the weekend ahead!

Eileen
Mary is such a lovely person, I'm sure you would enjoy her show ... although 'NC' didn't rate the amateur chefs that were on the show ! ?
The Great British Bake Off is a huge hit in the UK

Your recipes are always so wonderful looking.

Sorry for showing water when there has been too much many places all over the globe. Our flood water recede quickly so we are very fortunate.

I do love horses.

Thanks for visiting and have a blessed week.

I am not a big cook, but my husband is and is always looking for easy, healthy out of the ordinary recipes. I would say this qualifies! I have never heard of Mary Berry, but I am off to find out more about her...thanks, Jan!

Gail
Glad you like the look of the recipes featured on the blog. I try to show a mix, and hopefully there are one or two ... that will appeal to the readers ...

It was lovely to see the water pictures on your blog. I think the weather does seem to be rather mixed up at the moment. I do feel for the many who are doing their best to get on with their lives whilst nature is throwing too much water or other extremes at them.

Your horse photo's and posts are a joy ...

I always enjoy my visits to your blog - have a great Friday evening and a joyful weekend.

Kim
Many thanks for your comments.
Yes, Mary Berry is very popular and a lovely lady. I hope you find some of her recipe ideas for your husband to try. I'm sure you will both enjoy them.

Have a lovely weekend

I've been a fan of hers for along time. She's the best. I love Mary Berry.

Ivy
Mary Berry has many fans.
She bakes, creates some real winners ...