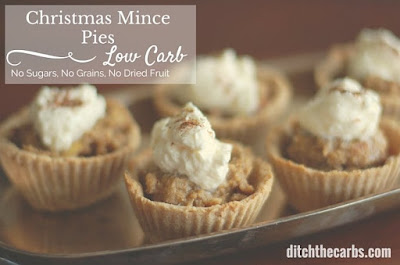 Some readers may have already seen this recipe idea for low carb mince pies. They are from Libby at 'Ditch The Carbs' ... and as she says what a difference between the carbs in these, 9.4g per tart, to some 'shop bought ones' at over 30g ...

Here is how she made them:

INSTRUCTIONS:
Flour-less Pastry Cases
Put all the ingredients in a mixing bowl and mix together with a fork until it resembles soft pastry. If it is too damp, add some more almond flour/ground almonds. if it has become too dry, add a drop of water at a time.
Roll out in between 2 sheets of baking paper and cut each circle slightly larger than the case you will be baking them in.
Press the pastry circles into each case and place on a baking tray. Bake in the cases at 180C/350F for 10 minutes, then remove from the pastry from each case and bake for 2 minutes on the baking tray to brown slightly.
Christmas Mince Pie Filling
Melt the butter and the grated apple on low in a saucepan.
Add all the other ingredients (apart from the brandy) and heat through for a minute or two.
Remove from the heat and add brandy to taste (I add 1 or 2 tablespoons).
Once cold, divide the mixture evenly amongst the pie/tart cases.
Brandy Whipped Cream
Whip the cream gently until soft peaks for, then add the sweetener, whip until almost firm, then fold in the brandy to taste.
To Serve
Top each low carb Christmas mince pie with the brandy cream and sprinkle with a ground nutmeg.

NOTES:
I haven't given quantities for the brandy whipped cream. It all depends on how much you would like to be served on top and on the side. The sweetness and amount of brandy required will be totally personal to you (personally, I like it quite boozy).

Recipe idea and other notes from Libby here 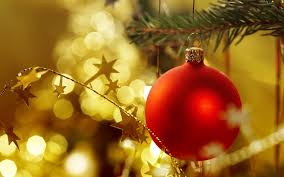 All the best Jan
Posted by Lowcarb team member at 17:40

My family eat Stollen Cake at this time of year. Your suggestion would be suitable for my Uncle who is diabetic. I will make some for him.
Thank you. Fredericka.

I wish I liked mince pies, I always feel like I'm missing out at this time of year.

Fredericka, welcome to the low carb diabetic blog, and many thanks for your comment.

Yes, Stollen Cakes are popular at this time of year, I can remember having a slice at a family get-together a few years ago.

I looked up more details about this cake and apparently, 'the largest Stollen was baked in 2010 by Lidl; it was 72.1 meters long and was certified by the Guinness Book of World Records, at the train station of Haarlem' read more here
https://en.wikipedia.org/wiki/Stollen

I hope your Uncle likes this low carb version of mince pies.

Jo, indeed at this time of year the shops and bakeries are swamped with mince pies ... but of course not everybody likes them.

You may like a black forest gateau?
This one is nice http://lowcarbdietsandrecipes.blogspot.co.uk/2011/10/black-forest-gateau.html

Hope your Christmas preparations are coming along ...

Oh, delicious! What a great recipe to share. Thank you :)

For some weird reason, I always thought mince pies had meat in them. These looks pretty darn good :)

My dear grandma would love this! She is away right now, but when she returns home this would be something I would love to make for her especially since she has to watch what she eats.

Hugs to you, Jan, and Merry Christmas!

Martha, I love sharing recipes ... and these are brilliant if you want to, or need to, consider the amount of carbohydrates / sugars in diet / meal plans ... hat's off to Libby for the original idea.

Rue ... mince pies have quite an interesting history:

"A mince pie is a fruit-based mincemeat sweet pie of British origin that is traditionally served during the Christmas season. Its ingredients are traceable to the 13th century, when returning European crusaders brought with them Middle Eastern recipes containing meats, fruits and spices.

The early mince pie was known by several names, including mutton pie, shrid pie and Christmas pie. Typically its ingredients were a mixture of minced meat, suet, a range of fruits, and spices such as cinnamon, cloves and nutmeg. Served around Christmas, the savoury Christmas pie (as it became known) was associated with supposed Catholic "idolatry" and during the English Civil War was frowned on by the Puritan authorities. Nevertheless, the tradition of eating Christmas pie in December continued through to the Victorian era, although by then its recipe had become sweeter and its size reduced markedly from the large oblong shape once observed. Today the mince pie remains a popular seasonal treat enjoyed by many across the United Kingdom."

So originally meat was used, and I believe some may still use it !

The recipe featured in this article is ideal for those who want to reduce the amount of carbohydrates ... in fact can be enjoyed by all!

Stephanie ... because of the reduction in carbohydrates, these are a great alternative to a more traditional type mince pie. I think it would be so lovely if you were to make your Grandma some on her return.
Enjoy them ... and Enjoy this most special time of year.