Jan and I are active gongoozlers!

No, gongoozlerling is not some deviant sexual practice, or a fad diet. It is a term for people that like watching narrow boat activity on canals and we love it. My fishing club has fishing rights on a stretch of the Grand Union Canal. When I am not fishing we often walk along the canal. It's always on very level ground and the walk suits a couple of old geriatrics like us. Try it sometime, join the gongoozlers, you could do worse. 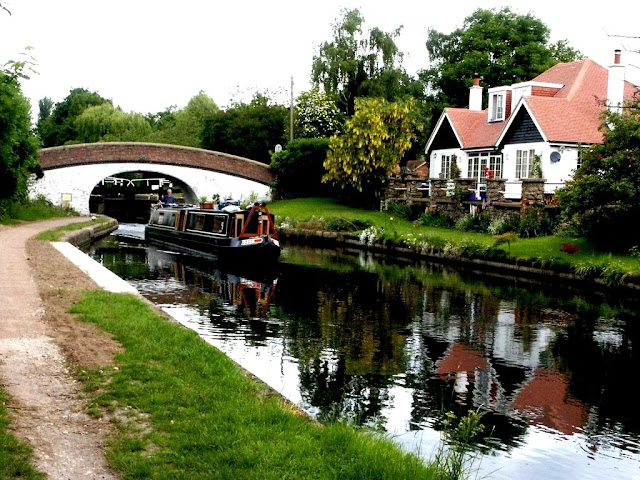 Posted by Lowcarb team member at 20:08

If I lived close enough I would CERTAINLY be a gongoozler.

Sounds like a very relaxing hobby. I love watching the ship's and barges on the Rhine. Hugs, Valerie

It would be fun to explore

...I've never heard the term 'gongoozlerling' before, I'd be interested it too!

That is such a pretty sight. One worth feasting one's eyes upon...often.

I wonder if I could use that in Scrabble and get away with it!

I once had a romantic notion of owning a canal boat until I was bitten by horseflies on the banks of the Thames! Have a wonderful week.

Sounds like you have a lovely time. I've heard people live on those boats. Well, at least I saw it in a movie......... Have a wonderful day.

"Gongoozler" may have been canal workers' slang for an observer standing apparently idle on the towpath. Though it was used derisively in the past, today the term is regularly used, perhaps with a little irony, by gongoozlers to describe themselves and their hobby.[1]

Must admit I thought this was a wind-up but then I googled it. It's true folks.

"The word may have arisen from words in Lincolnshire dialect: gawn and gooze, both meaning to stare or gape. It might be presumed that such an expression would date from the nineteenth century, when canals were at their peak, but the word is only recorded from the end of that century or the early twentieth. It was given wider use by the late L. T. C. Rolt, who used it in his book about canal life, Narrow Boat, in 1944.

GAWN is a small ship of lading, IE a working-narrowboat. GOOZE is previously defined a watcher, hence GAWN GOOZE - ler.

The term "gongoozler" may also be used in any circumstance in which people are spectating without contributing to either the content or interest of an event.

You live and learn.

what a beautiful picture. walking, good exercise and there is always something wonderful to see!!!

stunning photo Jan,this is great that when you don't fishing you walk beside this lovely canal ,water has healing power indeed

Are you sure it's not some deviant sexual practice? LOL!
Actually, I think this would be quite beautiful to see! Love the photo!
Big Hugs!