Mistletoe - Why Do People Kiss Underneath It ! 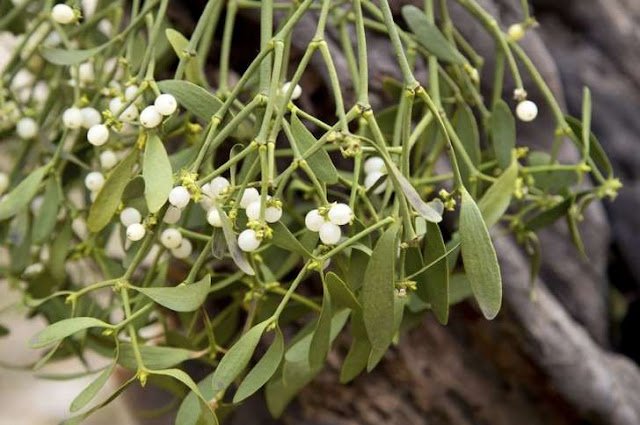 I wonder, have you ever stopped to think about how this tradition started ...

Mistletoe has long been considered a 'romantic' plant - as far back as the Celtic Druids of the first century - because of its ability to blossom even during freezing winters, according to History.com .

By the 18th century, it had become widely incorporated into Christmas traditions and men were allowed to "steal a kiss" from any woman caught standing under the mistletoe.

Refusing was seen as bad luck - so if someone tries to kiss you under the mistletoe at the Christmas party (and you actually want to kiss them) maybe really consider if you want to.

Another tradition saw men pluck a berry from the branches for each kiss they had - until they were all gone, and then they had to stop kissing.

But there's a more beautiful tale in Norse mythology about the festive favourite.

According to the legend, "when the god Odin’s son Baldur was prophesied to die, his mother Frigg, the goddess of love, went to all the animals and plants of the natural world to secure an oath that they would not harm him.

"But Frigg neglected to consult with the unassuming mistletoe, so the scheming god Loki made an arrow from the plant and saw that it was used to kill the otherwise invincible Baldur.

"According to one sunnier version of the myth, the gods were able to resurrect Baldur from the dead. Delighted, Frigg then declared mistletoe a symbol of love and vowed to plant a kiss on all those who passed beneath it."

The plant has always been associated with fertility and vitality.

By the 18th century it had been incorporated into Christmas tradition, and now it's a staple decoration in Christmas parties across the land.

Above words and picture from here

You may also like to read 'Christmas, the history behind our festive traditions' please see post here

Are you ...
Looking for a fool-proof way to cook your turkey look here
You may want a low carb mince pie recipe look here,
Have you seen 'The Best Low Carb Christmas Pudding Recipe Ever' - look here

All the best Jan
Posted by Lowcarb team member at 23:59

Love these old traditions. Fig pudding is one also

Love the Norse version - which I hadn't heard. Thank you.

This was ever so fascinating, dear Jan. Thank you for sharing :)

I hope you and yours have a beautiful Christmas. Hugs!

What a fun read! I'd never heard the Norse mythology tale.

Thanks for this interesting info and the seasonal links!

Thanks for sharing the information regarding Mistletoe...it's rather interesting to read.

Interesting read about mistletoe. Thanks for sharing, hugs, Valerie

Great stuff! And of course 'middletoe' is one of the famous errata in the historian's essential guide to Britain, '1066 And all That'. There's some alternative views on Christmas traditions here http://bitaboutbritain.com/christmas-magic/

Interesting info about this old tradition.
A wonderful Christmas to you Jan and to all who contribute to this blog.

I always love, love trivia like this. I remember kissing under the mistletoe so much when I was a kid, but never really considered how it came about. Thanks so much and happy Monday! Hugs...RO

I think it is a great old tradition. Thanks for sharing!

Merry Christmas to you and your family. Happy Monday, enjoy your day and new week!

It´s not really a tradition here - and I´m kinda glad about it, no one but hubby kisses me :-)

Hmmmm, interesting. I'll never think of the words "frigg it" in the same way again. LOL

Thanks for the information! I like the Norse story, but had to laugh at mom's name.

I grew up in Oklahoma, where mistletoe was plentiful. It was always part of Christmas decorations.

Mistletoe grows in spruce trees here in Maine, along the coast, but I have never seen it.

Jan, thank you for this very neat post! I never knew why mistletoe was used this way... I just took advantage of it to get kisses from someone I was attracted to. All a long time ago of course :)
The story of the Goddess Frigg was very interesting!

Have a lovely day 🎄

I remember that info about mistletoe --but hadn't thought about it or read about it in YEARS.....

My mother used to make Mince Meat Pies and also Fruit Cakes.... I never cared for either of them --but back in the 1940's ---that was the 'thing' to eat at Christmas and/or Thanksgiving.... These days, my favorite pies for those holiday seasons are Pecan Pie --with Vanilla Ice Cream of course. Many people like Pumpkin Pie --and I do too...BUT--Pecan is my favorite...

You live and learn! I did enjoy this, all news to me. Lovely post.xxx

It´s not that common in Sweden. Dont remember seen it more then once.

I never knew why.

I didn't know that about mistletoe. Interesting.

No point me hanging up mistletoe...no one around here to kiss...or for me to kiss.

I love mistletoe, but, hanging out in natures trees.

Ooh, I have read quite a few posts on Mistletoe but this is by far the most informative!

I always wondered where that tradition has come from, very interesting!!