'Is this the oldest tree in the world?'

A new study suggests that an ancient cypress in Chile may be the world’s oldest tree! The tree is in Chile’s Alerce Costero national park, and is known as the Great-Grandfather and could be more than 5,000 years old. 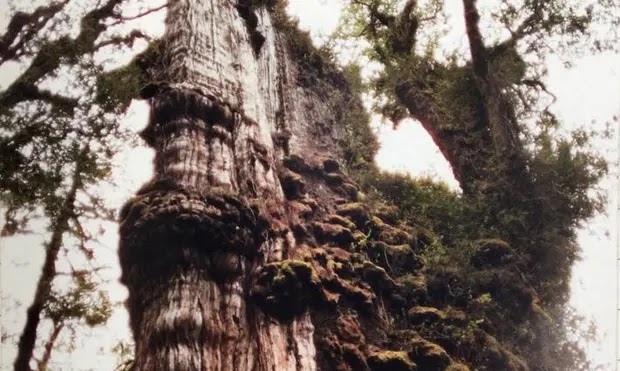 Fitzroya cupressoides in a forest at the Alerce Costero national park in Los Rios, Chile.
Undated photograph : Jonathan Barichivich
"Scientists in Chile believe that a conifer with a four-metre-thick trunk known as the Great-Grandfather could be the world’s oldest living tree, beating the current record-holder by more than 600 years.

A new study carried out by Dr Jonathan Barichivich, a Chilean scientist at the Climate and Environmental Sciences Laboratory in Paris, suggests that the tree, a Patagonian cypress, also known as the alerce milenario, could be up to 5,484 years old.

Maisa Rojas, who became Chile’s environment minister in March and is a member of the United Nations’ Intergovernmental Panel on Climate Change, hailed the news as a “marvellous scientific discovery”.

Known in Spanish as the alerce, the Patagonian cypress, Fitzroya cupressoides, is a conifer native to Chile and Argentina that belongs to the same family as giant sequoias and redwoods.
They grow incredibly slowly and can reach heights of up to 45 metres (150ft).

In 2020, Barichivich took a bore sample from the Alerce Milenario, a tree he would visit as a child, but the tool he used was not able to reach its core. He then used computer models to factor in environmental factors and random variation to pinpoint its age.

As he has not yet carried out a full count of its growth rings, Barichivich has not formally published his estimate in a journal, although he hopes to do so in the coming months. If his findings are proven, the Alerce Milenario would outstrip a 4,853-year-old bristlecone pine in California known as Methuselah, and now thought to be the oldest tree, by 600 years.

The Great-Grandfather towers over a cool, humid valley in the Alerce Costero national park, its gnarled crevices sheltering mosses, lichens and other plants. Visitors are still able to circle its base, which according to Barichivich is causing harm to the tree, along with climate change drying out the area.

Logging plantations cover more than 2.3m hectares of southern Chile, according to the country’s forestry institute, and cellulose production is a major industry for the country. Thirsty non-native pine and eucalyptus plantations make up 93% of this total area, threatening Chile’s native species. Between 1973 and 2011, more than 780,000 hectares of native forest were lost in Chile, and the forestry commission estimates that over the last two decades, between 60,000 and 70,000 hectares or native woodland has been destroyed each year."
Words and picture from article here
h/t Marks Daily Apple here
Do you have trees near to you? We have some very tall Monterey Pines and Oak trees, the squirrels certainly enjoy scampering up and down the Oaks, lovely to watch.
You will find a variety of articles, studies and recipe ideas within this blog, and not all may be suitable for you. If you may have any food allergies, or underlying health issues please take these into account. If you are a diabetic and not sure how certain foods may affect your blood sugars, test is best, i.e. use your meter. If you have any concerns about your health it is always advisable to consult your Doctor or health care team.

All the best Jan
Posted by Lowcarb team member at 23:03

That’s amazing! If this tree could only speak imagine the tales it would tell. Lots of trees here in the north but none grow to that amazing height ! 👍❤️

How I would love to see that tree. And how I love knowing it has survived for so long.

Never heard of this tree.
Coffee is on and stay safe

I had oaks and hickory and pine along with smaller trees in my yard. Tommy has one magnificent maple and smaller trees. I like living near trees. Birmingham, AL is a city of tree, so even driving on the interstate, we are driving through forests.

Such a large tree and here in Tasmania we have the tallest eucalyptus tree at 99.6m.

Fabulous tree! We have none as old as that one near here. Valerie

It's amazing to think that a tree could live for so long. We often walk in ancient woodland but the trees there aren't quite that old.

In our area, the oldest (or at least the most famous trees) are called the Hartwick Pines and they are located in Northern Michigan. They're very tall, quite magnificent. But I think this one has them beat by a mile!

Very cool post. I love reading about nature. And food too of course! Happy weekend.

I had never heard of this tree, but it's massive and ancient! Have a great weekend Jan

Great post. I have heard of this tress. Yes, I have all kinds of PNW type trees around me. Have a great weekend.

Wow, now that is an old tree! We have quite a few trees in our garden that we've planted over the years. As we've been here for over 40 years so of them are quite tall now! Take care and have a great weekend, Sue x

Wishing you good health, laughter and love in your days,

how incredible. I have read a couple of books about trees and how they communicate with each other and how they help each other by sharing nutrients and light for the good of all - it seems they are a caring community.

Goodness, what an amazing tree. It's mind boggling thinking about how long some trees can live.xxx

It is so sad that such an old tree could die from the environment, wow I didn't know a tree in California was the oldest so far.