Gezzathorpe and why I feel another Jimmy Moore pod cast coming on.

Sorry folks, some of you must be getting sick of the amount of times we have posted about this guy recently, but he gets more ludicrous with every post. Remember he says he is a diabetic (he has proved he is not), he uses no diabetes medication and holds non diabetic blood glucose numbers on 250 carbs a day. Now he says he has said a least six times he is a lowcarber. Gezza makes Sid Bonkers appear sane, believe me that takes some doing.

Don’t get me wrong, as a pair of court jesters they are as good as it gets, but you can see from comments made on the threads they have infested, they are causing great confusion for the newbie’s and inexperienced. Meanwhile the administrator and mods sit back, and their only input has been to lock the Southport Doctor thread, (a proven medical professional) and a thread started by IanD. I feel another Jimmy Moore pod cast coming on. Here is the last one, big changes were made within days of this going out. The two senior mods got their exit visas. 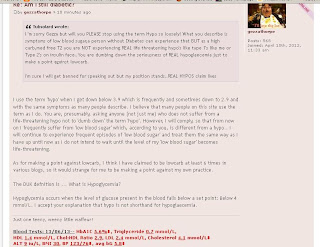 Posted by Lowcarb team member at 16:13

Gezza an absolute menace.
What is his aim here?
Has he got an aim?
Will he tell us ?
Gina

I think he is after the title of the biggest nutter in the history of the forum. Clearly the mods are too stupid to see what he is doing, or maybe they have been told to keep away from him. Look how long the admin let Kenny boy wreck the place. It was only Graham, me, Jay and Jimmy that see him off. One thing is clear, the owners don't give a damn about the well being of diabetics.

Go and look at the DIY OGTT results on ETYM, some of them are lower than Gezza. Are they diabetic?

"Go and look at the DIY OGTT results on ETYM, some of them are lower than Gezza. Are they diabetic?"

Can they consume a high carb meal like gezza without medication and have a non diabetic BG of 5.1 2hrs after, or in another instance 3.4 after 1.5hrs?

If they can they have found the miracle cure for type 2 diabetes.

Has he actually posted pics of his meter to prove these amazing hypos of his? Maybe one day he'll go into a diabetic coma if he's such a medical wonder???

I hope someone is reporting his post to the mods - I doubt if they'll do anything otherwise.

I see his thread got locked last night. Stand by for more dross on another thread.

BTW did I tell you I can hold non diabetic BG numbers on a diet of pasta, rice white bread, spuds, cornflakes and Celebration chochies.

OK you worked me out, I was bull shiting you.