When Martians Attack Carbo - loading Could Spell Your Doom ! 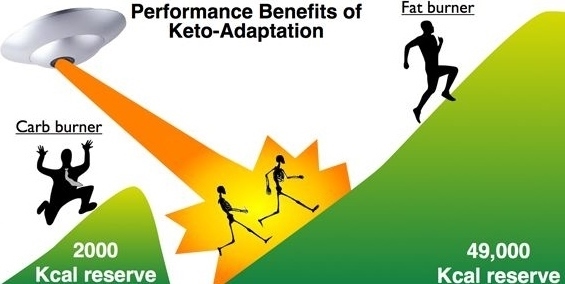 If you are on a ketogenic diet (50gm carb per day or less), your metabolism is adept at burning fat for energy and so your energy reserves are only limited by they amount of body fat you have. This means, if you are a 150 lb man with 20% body fat, you could (assuming you replenish all the electrolytes, fluids, etc., and that your joints hold up) burn through 49,000 kcals before you hit “the wall.”

This is in comparison to the measly 2000 kcals you have access to (from muscle glycogen) if you are not keto-adapted and follow a typical, high-carb diet including carbo-loading the night before a big event.

Low-carb Versus High-carb: Competitive Running
Luke is always reminding me that information like this is more interesting when I include a practical application. So here it is: If you are an endurance athlete on an old-fashioned high-carb diet, sometimes still recommended by fitness magazines that endorse carbo-loading, you can expect to hit the wall at around the 20 mile mark of a 26-mile marathon.
If you train on a low-carb diet and skip carbo-loading altogether, you have access to a much larger supply of caloric reserve (from body fat) and stand a good chance of blowing by your competition as their gas tanks run empty.

Low-carb Versus High-carb: Running for Your Life

But here’s how this applies to the majority of us who aren’t extreme ultra-athletes. A recent article in The Guardian explained that NASA is concerned that global warming may alert space aliens to our presence in the galaxy. Sensing us as a threat, NASA warns, the aliens may be forced to attack.
If you’ve ever seen War of the Worlds, or any alien-attack movie, you already know how this imminent threat is destined to play out. As soon as the invaders finish hovering around making ominous cloud formations, they get right to the business of blowing stuff up. It’s at this point that all the Earthlings will be forced to grab their kids and sprint down the street, Tom Cruise-like, as cars and pieces of houses and bridges fly through the air in the background. This running part, you’ll remember from the movies, can go on nonstop for days. And since all the restaurants are gone and grocery stores destroyed, there’s nothing to eat.

This is where the true benefit of the ketogenic diet will manifest. If you are not dependent upon regular infusions of carbs for energy, you’ll be able to keep on running ahead of the space aliens’ plasma blasts long enough for them to succumb to an Earth-born virus (or a virus Jeff Goldblum has downloaded into their computer mainframe, whichever comes first).
Not only will you and your family survive the aliens’ onslaught, since you will have been burning fat and working your muscles all week, you’ll look fantastic. When they vote for which groups of people should be charged with the duty of repopulating the Earth, you’ll be placed at the front of the line.
Although NASA specialists didn’t mention this, it’s entirely possible that benevolent aliens, sensing our distress, could show up offering gift baskets filled with cherry tarts, muffin-tops and all manner of high carb treats. In this case, low-carbers would risk offending the sensitive aliens by turning the gift baskets down.
Whichever way it goes down, there’s always the athletic performance thing.
More from Dr Cate here: http://drcate.com/when-martians-attack-carbo-loading-could-spell-your-doom/
Graham
Posted by Lowcarb team member at 22:11

Guess I will just have to offend any aliens
"low-carbers would risk offending the sensitive aliens by turning the gift baskets down." Ha Ha

My husband and I can climb mountains all day after a bacon and egg breakfast. We only take a bag of nuts with us plus water. (The nuts are just to give us something to do when we get to the top!)
I get frustrated at all the idiots who suggest that a keto diet causes 'brain fog' (eg that dimwit Carbsane).
It's only common sense that whenever any group of humans throughout history has been short of food for ANY reason (eg a bad winter or an alien invasion) then the ones who will survive to carry on the human race will be those who can think more clearly and run longer and faster using ketones as a fuel.
Duh!
Nice post BTW!

Quirky but liked it
Josh