One of the diabetes worlds most closely guarded secrets was unveiled today at the monthly board meeting of the Wallycorker foundation and lowcarb diabetic blog trustees. Co-designed by Lord Beantipper and Roger ‘Keto Warrior’ Jenkins and cast in solid 24ct.gold The Golden Gezza was universally accepted as a masterpiece. Both men refused to comment on rumours Beantipper’s member had been used to make the mold.

This prize will only be awarded to diabetics who have made a monumental discovery in the control of diabetes. Only diabetics that consume eye-watering quantities of carbohydrates on zero diabetic medication and hold non diabetic numbers will be considered. The Golden Gezza will be the highest prize awarded by the Lowcarb diabetic blog trustees. The award also carries a $1,000,000 cash prize. At the meeting Lord Beantipper stated “ The first winner of this new award will have to have unbelievable control to be considered worthy of  The Golden Gezza” Monty went on to say “at the present time only one type two diabetic in the world appears to have the credentials, but with so much money and glory awaiting the winner others are bound to come forward” 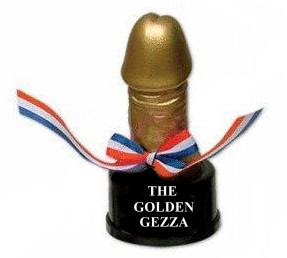 Posted by Lowcarb team member at 13:39

Very funny but what worries me is that some of the diabetics over there may think they can do the same as Gezza and get the same results. Not calling Gezza a liar but when the cherub also says well done I'm wondering is Gezza genuine?Could he be a low carb anti troll? there's been many of them

“Thanks Catherine!x I've got a wild and whacky theory about the monocytes and my 'itching' which I'm going to speak with my GP about. More later on that later. By the way, my HbA1C was 0.2% above my own calculations which is not bad.

PS It will be interesting to see what 'our mutual friend' says.”

Well what a surprise lowcarb anti and ex Kenny boy groupy just loves Gezza, they must think we are as mad as them to not see the game they are playing. Still, if others want to try doing a Gezza they will see their BG go through the roof in no time. Pity there is not a mod that cannot see through the bullshit.

"Shows how we are all different..." Lol

Sorry Eddie!;) couldn't resist...I'm kidding of course!..BUT..I too worry about the confusion and despair that a newbie might feel-feeling like they have failed because they can't gain good control at that level of carbs or even 200g's per day say despite being on meds even.

"Shows how we are all different..." Lol

I am beginning to agree with that often used statement. Some people live in the real world and others live in a world of total fantasy. I have met a lot of people who can consume 250 carbs on no meds and hold non diabetic numbers, their called non diabetics. But we have two candidates in the running for the Golden Gezza now, and one a woman. Five years plus of non diabetic HbA1c, no meds and on the highly mysterious low GI diet. Still when this blog pointed out some time ago the 4.9 HbA1c had been held for years it changed overnight to 5.2. Plus if memory serves the individual concerned stated over here a severe thyroid situation was the main reason for the amazing numbers.

What will Gezza tell us in the future. Aliens abducted him and fitted him up with a new pancreas ?

The biggest problem in communication is the illusion that it has taken place.

His delusion is he believes many believe him.

Your paranoia can really kick in now Eddie, Sid has congratulated him as well as others.

Paranoia over Sid, he hasn’t got the brains of a grasshopper, similar calorie intake though.

The quote below from IanD sums up what gezza's results would mean to most T2s trying to maintain good A1c's, this also more or less tally's with what Eddie's been saying, though being a gentleman Ian's far more restrained in his wording.

"Gezza, your results are excellent - but suggest you may not be not diabetic. Achieving those results without medication or carb restriction is unlikely for T2 patients."