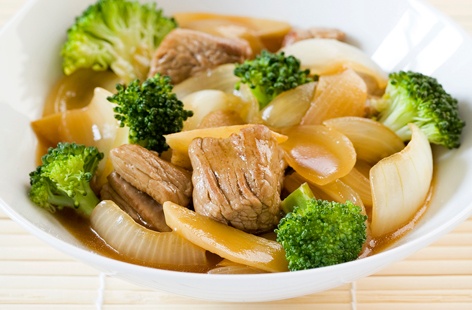 Method:
Heat 1tbsp (sunflower) oil in a pan or wok and stir-fry the beef for a couple of minutes.

Scoop out, then add the garlic, ginger, chillies and onion and cook for 3-4 minutes. Add back the beef with the broccoli, soy and 1 tsp sesame oil.

Cook for 2 minutes then serve.

Simplicity and low carb too!

Stir Fry, did you know:
Stir frying (Chinese: 炒; pinyin: chǎo) is a Chinese cooking technique in which ingredients are fried in a small amount of very hot oil while being stirred in a wok. The technique originated in China and in recent centuries has spread into other parts of Asia and the West. Many claim that this quick, hot cooking seals in the flavours of the foods, as well as preserving their colour and texture.

Scholars think that wok (or pan) frying may have been used as early as the Han Dynasty (206 B.C. – 220 A.D.) for drying grain, not for cooking, but it was not until the Ming Dynasty (1368–1644) that the wok reached its modern shape and allowed quick cooking in hot oil. Well into the 20th century, while restaurants and affluent families could afford the oil and fuel needed for stir fry, the most widely used cooking techniques remained boiling and steaming. Stir fry cooking came to predominate over the course of the century as more people could afford oil and fuel, and in the West spread beyond Chinese communities.

Stir frying and Chinese food have been recommended as both healthy and appealing for their skilful use of vegetables, meats, and fish which are moderate in their fat content and sauces which are not overly rich, provided calories are kept at a reasonable level.

The term "stir-fry" was introduced into the English language in Buwei Yang Chao's book How to Cook and Eat in Chinese (1945), to describe the chǎo technique.

We bring a variety of recipe ideas to this blog, but please note, not all may be suitable for you. If you may have any food allergies, or underlying health issues these must always be taken into account. If you are a diabetic and not sure how certain foods may affect your blood sugars, test is best, i.e. use your meter.

All the best Jan
Posted by Lowcarb team member at 10:01

Oh my, you have me drooling over the keyboard again, this is another recipe for my fast growing folder - thanks for sharing, hugs, Valerie

What a fantastic recipe. It looks delicious!!
Have a wonderful week whatever the British weather has in store for you :)

This is really delicious!

Hello, this looks delicious. I will definitely save this recipe. Thanks for sharing.
Happy Tuesday, enjoy your day.

Oh, this looks so good! I have an electric wok that I have been neglecting.....time to haul it out for this recipe - thank you for sharing! xx Karen

Looks wonderful! (I'd use seitan instead of beef:)

this sounds like something my hubby would really enjoy

Dear Jan, every time I see your photos and recipes I am drooling! Thank you so much for sharing. :)

Hi and thanks for another great menu idea!

i like stir fry, we prepare it a lot, in many different ways!!!

I could do something similar to this with faux meat. Thanks for the idea, I think I have all of the ingredients in my kitchen...

My mouth is watering! LOL!

So simple and I bet it's very tasty too. Can't remember the last time I ate steak.
Lisa x