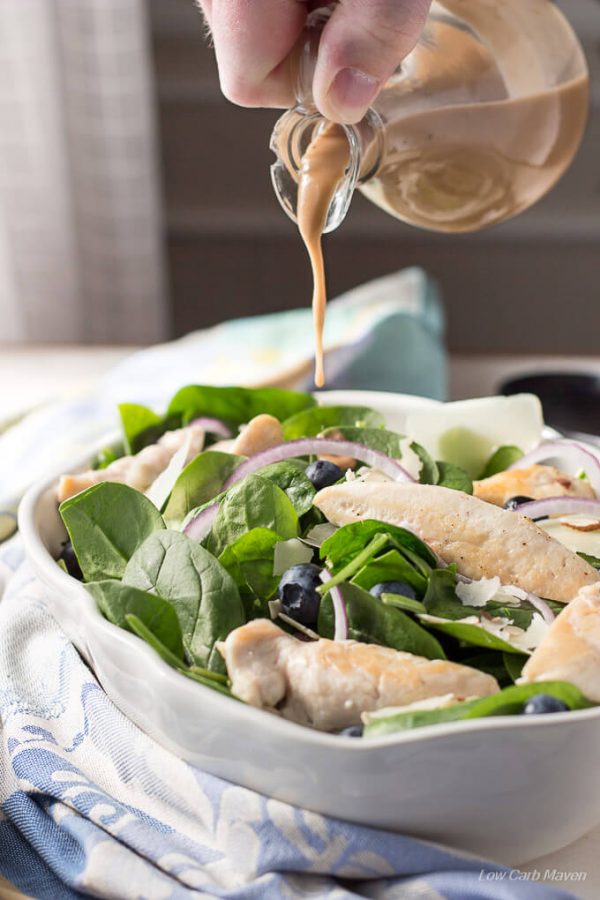 This great Chicken Spinach Blueberry Salad with Parmesan cheese and balsamic dressing is a fast and easy low carb meal, it's from Kim at Low Carb Maven Site.

"Spinach is believed to be of Persian origin. By the 12th century, it spread across Europe and became a desirable leafy green known for good health; a reputation that stands firm to this day. The name Florentine is often used to describe dishes containing spinach (and a creamy sauce). It is thought that this name dates back to the 16th century and the Italian wife of France's Henry II; Catherine de Medici. The unverified tale states that Catherine introduced spinach to the Court of France and to honour her Italian heritage, she then decided to call any dish containing spinach Florentine.

Spinach is available all year round but is in season during the spring (March - June). It is well known for its nutritional qualities and has always been regarded as a plant with remarkable abilities to restore energy, increase vitality and improve the quality of the blood. There are sound reasons why spinach would produce such results, primarily the fact that it is rich in iron. Iron plays a central role in the function of red blood cells which help in transporting oxygen around the body, in energy production and DNA synthesis. Spinach is also an excellent source of vitamin K, vitamin A, vitamin C and folic acid as well as being a good source of manganese, magnesium, iron and vitamin B2. Vitamin K is important for maintaining bone health and it is difficult to find vegetables richer in vitamin K than spinach. Others include kale, broccoli and green cabbage."

All the best Jan
Posted by Lowcarb team member at 10:28

Great recipe, looks delicious and thanks for sharing. Greetings!

This looks great, and I am hungry, so I'm off to see what I can find in my kitchen to eat! Hugs, Valerie

Perfect. I was wanting a meal containing spinach for this evening. Ours has shot up again and needs using. X

Hello, this salad looks delicious. Thanks for sharing. Happy Wednesday, enjoy your day!

Thank you for a great meal suggestion. Enjoy your day.

Mmmm... what a wonderful salad to enjoy at any time, but expecially during the summer! Thanks for sharing! Hugs to you, dear Jan.

This is such a great recipe!

I love blueberries. We have them almost every day.

YUM YUM YUM----most all of my very favorite foods wrapped up into one meal... Makes me hungry.

Thanks for the recipe.

My hubby is on a salad diet right now. I should totally shoot this post his way.

This is a lovely salad, thanks for the interesting spinach facts!

How yummy-looking. Always looking for new salad combinations myself. I don't usually think of adding blueberries though, so I'll have to try that.

Hold the chicken and I am there. It looks delightful.

Anything with blueberries is fine by me!

Looks good but no onion for me, cooked yes but not raw.

I love chicken salads. Must give this a try. Thanks Jan, you always share delicious recipes.

I would not have thought of adding blueberries to a salad - what a great idea! And I love Parmesan cheese - shall try this very soon. Thank you for the recipe.

Delicious recipe though knowing it for first time that chicken can be adad in salad .
Spinach was used more by me when mom used to grow in her yard garden but since some years i reduced it because from market we find spinach which causes stomachache .my husband says it is due to the chemicals used by farmers for insects protection. Though i boil it before use but nothing changes it

It looks a real taste, the chicken fillets is quorn I presume, hee hee hee.

i don't think i have ever seen blueberries in a salad but i quite like the idea. i love strawberries in salad!! spinach, my favorite!!!

I love all the ingredients here! The presentation is lovely, too!

Combining spinach and blueberries is an interesting idea...

A bowl full of fresh ingredients bursting with goodness, a tasty one too I bet with that dressing as an added plus.
Lisa x

This looks so tasty!!