Recipes for Quiche are many and varied, and I'm sure we each have our own favourite. These days you can make low carb versions as a crustless quiche or like the recipe suggestion below with a crust - but this crust is a little different - it's a low carb pie crust, which uses almond flour.

A slice of Quiche is delicious and can be eaten by itself or with a side salad, perhaps a little greenery of mixed salad leaves and some tomatoes.

Although quiche is now a classic dish of French cuisine, quiche actually originated in Germany, in the medieval kingdom of Lothringen, under German rule, and which the French later renamed Lorraine. The word ‘quiche’ is from the German ‘Kuchen’, meaning cake.

The original ‘quiche Lorraine’ was an open pie with a filling consisting of an egg and cream custard with smoked bacon. It was only later that cheese was added to the quiche Lorraine. Add onions and you have quiche Alsacienne. The bottom crust was originally made from bread dough, but that has long since evolved into a short-crust or puff pastry crust.

Quiche became popular in England sometime after the Second World War, and in the U.S. during the 1950's. Because of its primarily vegetarian ingredients, it was considered a somehow ‘unmanly’ dish, - “real men don’t eat quiche.” Today, one can find many varieties of quiche, from the original quiche Lorraine, to ones with broccoli, mushrooms, ham and/or seafood (primarily shellfish). Quiche can be served as an entrée, for lunch, breakfast or an evening snack.

The words above about Quiche Origins taken from here

If you'd prefer a crustless quiche this asparagus one is nice, see it here 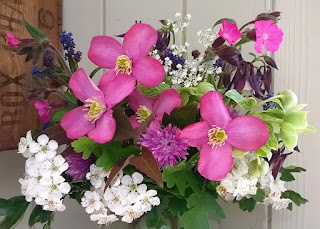 as it's Friday here are some flowers - enjoy your day

All the best Jan
Posted by Lowcarb team member at 12:16

Hello, the quiche sounds delicious. I have never heard of almond flour, I will have to check our stores here. Lovely flowers. Enjoy your day!

Looks wonderful, Jan, and I enjoyed the bit about origins (of course!). Nice flowers too - I think the UK needs some today! Btw, I am an awful cook - but I tried your recipe for burgers that you posted a while ago - it was great; I was quite chuffed...so thank you.

This sounds very good, once again you have made me feel hungry! Hugs, Valerie

I need to eat a lot more quiche, and love this recipe. Of course, anything is yummy with bacon, right? lol Hope your weekend is amazing! Hugs...

It looks delicious! Will checkout the crustless quiche thanks.

Another delicious recipe, der Jan. Many thanks for sharing.

And oh, what lovely flowers! Happy weekend to you. Hugs!

Quiche is my favourite tasty go to for unexpected guests, will try this one soon 😊 Hope you have a super weekend Jan.

Quiche is a favourite around here. I make the crustless kind these days, but a good crust adds to the heft of the dish, I think. Thanks for sharing this low-carb crust recipe.

I must explore cooking with almond flour - thank you.

Oh, yummy! This is so lovely.

Looks really good to me. Thanks Jan :D)

I enjoy quiche, I'd have to modify this one a bit to make it vegetarian, but it looks yummy!

I do love quiche, and I really appreciate you sharing this. Thank you so much.

That looks amazing. A slice of that with a salad would do me any day.
Lisa x

This looks so yummy! Love the flowers! Thank you! Big Hugs!