Groundbreaking study: low carb is an effective treatment for fatty liver
The following is a post by Ann Fernholm, author, science journalist and PhD in molecular biotechnology. She is the founder of the not-for-profit Dietary Science Foundation. 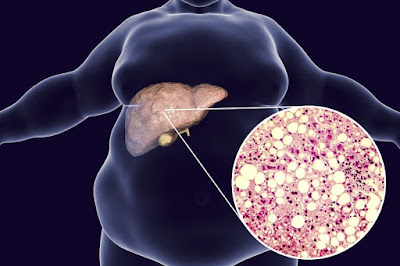 Approximately 25 percent of adults in the Western world have fatty liver and are thus at an increased risk of developing cirrhosis, liver cancer, type 2 diabetes and cardiovascular disease. Fatty liver is considered a chronic disease, but researchers at the University of Gothenburg have now proven that it is possible to get rid of the liver fat in just two weeks. The medication is called: a strict low carb or keto diet.

Fatty liver – what is that? You might wonder, and perhaps think that this is referring to that fat-rich paté which the French love. But fatty liver is one of the most common HIDDEN diseases in the world. In earlier decades, fatty liver was mostly associated with alcoholism, but in the footprints of the obesity epidemic, the frequency of the disease has sky rocketed. Approximately one out of every ten adolescents in both Europe and the US have the disease today.

A little fat in the liver is not harmful (given that you’re not a goose and thus are at risk of becoming paté), but in the long run the liver risks becoming inflamed and the liver cells can die. A fatty liver also increases the risk of developing cirrhosis, type 2 diabetes and cardiovascular disease. To avoid this, people need to get the fat out of the liver.

The advice given to people with fatty liver has been to exercise, count calories and lose weight, but – as we all know – most people fail and the fat remains in the same place. That’s why it is an important breakthrough that researchers at the University of Gothenburg have showed that the fat can go away without substantial weight loss. The participants in the study simply continued to eat the same amount of calories, but swapped carbs for protein. Within just two weeks, the liver was significantly thinner than before.

The study, which was published in Cell Metabolism, included only ten people and is small, but it’s a very interesting piece to dig into as a biochemist like yours truly. It’s an extremely detailed map showing what happens when a person cuts down on sugar and starch in their diet. The liver metabolism changed almost immediately. Instead of creating fat, it started burning it and already in the first day you could see a significant reduction in liver fat. As a great side effect, the participants also improved their cholesterol profiles.

The microbiome also changed. A surprising discovery was that it started producing more folic acid, a vitamin which is important in the liver’s metabolism. Low levels of folic acid has earlier been associated with an increased risk of fatty liver.

Is sugar a worse than starch?

In my Swedish book, Det sötaste vi har (The Sweetest Thing We’ve Got), I write that some researchers suspect that our high consumption of sugar is an important reason explaining the epidemic of fatty liver. Sugar contains the sugar molecule fructose, which is metabolized in the liver. When we consume too much candy, soda and other sweets, our liver starts producing fat and after a while fat appears to get stuck in the liver.

In order to test this hypothesis, researchers at UCSF in San Francisco have earlier let children with fatty liver replace the sugar in food with starch (which contains the sugar molecule glucose). Just like the current study conducted in Gothenburg, the intention was to let the children continue to eat the same amount of calories and maintain their weight.

Despite the fact that the children ate carbs in the form of starch, the liver’s metabolism changed rapidly. Within nine days, almost half of the fat was gone. Some children also lost weight, but the amount of fat in the liver also decreased among the children who simply maintained their weight.

The Dietary Science Foundation invests in a study on fatty liver

So what conclusions can you draw from all this? First and foremost: it’s time to stop counting calories. Different types of calories have different effects on the body. Carbs do more harm than good for people with fatty liver, and there is reason to suspect that sugar is the worst of all carbs.
BUT. Both the Gothenburg and the USCF study are small and lacking a control group. In order to establish a new treatment, a better form of studies is required, randomized controlled trials. The Dietary Science Foundation just invested in this type of study at the Karolinska Institute in Stockholm, where a strict low-carb diet will be compared to 5:2 intermittent fasting and conventional treatment. If the study confirms the results above, it’s an important step in establishing a new dietary treatment in the medical care. And a chronic disease with over one billion sufferers, might turn out to be treatable in just a couple of weeks. Guess if that would reduce a lot of costs and strain on the medical system?

The above by Ann Fernholm

All the best Jan
Posted by Lowcarb team member at 19:07

Such a good mix of posts. This one is very informative.

Well there’s goes the toast and honey right out the window!

Google translate:
Thanks for the great information.
We're quarantined. We can't leave the house.
From home I send you this hug

Hello Laura, many thanks for your comment.
Thinking of you and yours in these very difficult times.

This is great news. Valerie

Very good information - I enjoyed learning this. Folic acid is also important to prevent birth defects, so an added benefit right there. Hope you are staying safe and well.

Another interesting read...there is just so much information here.

Wow, I needed this.

Great post and information, thanks for sharing. Take and stay well.
Have a great week ahead!

This is interesting! Thanks for sharing.


i hope you and family are fine Jan
stay safe and keep taking good care !

Keep calm and be well,
A ShutterBug Explores,
aka (A Creative Harbor)

This is very interesting, and it's good to know that it's something that you can fix. Take care, Sue xx

This was a really fascinating article. I found it interesting how sugar versus starch makes such a difference. Thanks for sharing.