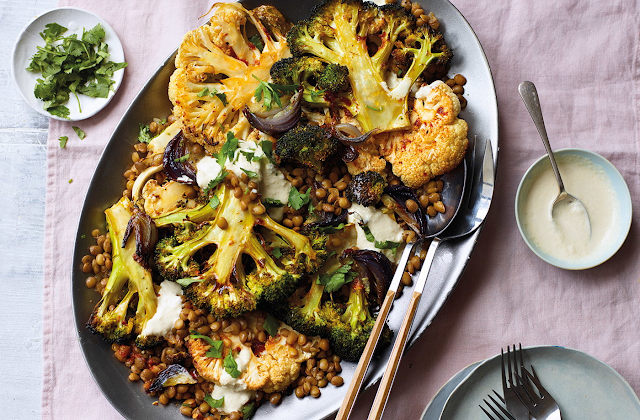 Method
1. Preheat oven to gas 6, 200°C, fan 180°C. Put the harissa, oil and garlic in a bowl, season and stir to combine.
2. Spread out the broccoli, cauliflower and red onion wedges on a large baking tray. Pour over half the harissa marinade, mixing so that the veg is fully coated. Roast for 25-30 mins or until tender.
3. Meanwhile, pour the remaining marinade into a medium saucepan and add the chopped onion. Cook on a low heat for 10 mins, stirring occasionally, until softened. Add the lentils and a splash of water to loosen. Stir to coat the lentils in the marinade and simmer for 3-4 mins until heated through.
4. Put the hummus in a small bowl with 3 tbsp. water and stir until smooth.

5. Top the lentils with the roasted veg. Scatter with coriander and finish with a drizzle of the hummus sauce.

A little about lentils!
As lentils are relatively high in carbs, they don’t make the best option for very low carb diets like Keto. However, on more liberal low-carb diets, you may be able to incorporate a moderate amount of lentils.

But what are Lentils?

Lentils are an edible legume. They come from a bushy annual plant known for its small round seeds. The crop reaches heights of around 40 centimetres and grows pods that typically contain two seeds in each.

Origin of Lentils
Lentils are thought to have originated in the East and Mediterranean areas. They have been a popular food source of our ancestors since ancient times. In fact, they’re one of the earliest domesticated crop known to man!

Health Benefits of Lentils
Lentils are low in fat, high in protein, folate, phosphorus and iron. They are high in B vitamins, iron, magnesium, potassium and zinc. They’re also an excellent source of plant-based protein.

Lentils are high in fibre to support a healthy digestive tract and the growth of good gut bacteria. Eating lentils can help ease constipation and improve gut function.

Additionally, lentils contain a variety of important plant compounds known as phytochemicals. These compounds can help the body fight off chronic illnesses, such as heart disease and type 2 diabetes.

Brown: These are the most popular type and are earthy in flavour and retain their firmness while cooking. Brown lentils make a great addition to stews and soups.

Green: These can vary in size and are usually a more cost efficient alternative to using Puy lentils in recipes.

Yellow and Red: These lentils are split and cook quickly. They have a slightly sweet and nutty flavour.

Puy: These lentils hail from the French region of Le Puy. Puy lentils have a peppery taste. They look similar to green lentils, except they’re considerably smaller in size. Puy lentils are also known as French lentils. These small lentils hold their shape better after cooking.

Beluga: These lentils are so tiny and black, they almost resemble caviar. They make a great addition to salads.

Some interesting facts about lentils
Lentils are legumes that originated in Asia.
In 2400 BC, lentils were found in the burial tombs of Ancient Egyptians.
Lentils are used around the world, but they’re especially popular in Middle Eastern, Greek, French and Indian cuisines.
In the Middle East, lentils are typically prepared with onions and garlic, while in France, they’re often served with roasted meat.
In Indian cooking, lentils are made into a popular soup called dal.
Lentils are an easy to cook legume that don’t require soaking, unlike dried beans.

In Washington, there is a National Lentil Festival celebrating this popular legume!

The above about lentils, plus more to read, from article here

Dear reader, this blog is presented in a magazine style - we hope something for everyone. You will find a variety of articles, studies, thoughts, photographs, music and recipes!

However, not all the recipes and food suggestions featured in this blog may be suitable for you. If you may have any food allergies, or underlying health issues these must always be taken into account. If you are a diabetic and not sure how certain foods may affect your blood sugars, test is best, i.e. use your meter.

This sounds gorgeous, I love lentils. I had red lentil soup today. Valerie

This looks really nice and I like lentils so it's another recipe for my file. Take care and have a great month, Sue xx

I am in such a rut of steaming my veggies....just enough...not overdone. But it's still so plain! This looks delicious!

Delicious! I will definitely have to try this one. Harissa is new to me and have only used it on one dish. I look forward to using it again. Thanks Jan.

This looks so good.

This is my kind of dish.

I never think about roasting broccoli and cauliflower till I read about it here...and this does sound good.

This is definitely a keeper!!!

This one is going in my recipe file!

That must be delicious!

I could quite easily eat veggie dishes such as this but Mick is a true carnivore and would wonder where his meat was.

I love roasted broccoli ad cauliflower but I've never had lentils yet.

I love lentils and often make lentil soup with brown lentils adding onion, celery and carrot to the mix...I need to try other sorts. I have tried red lentils. Maybe Puy will be next.

i think i am one of people who ate lots and lots of lentil until doctor forbade them dear Jan
i LOVED this recipe ,both main things used within are my favorite
one of our today's dish was broccoli :)

This looks so tasty! I love veggies and lentils. YUM! Thanks for sharing. :)
~Jess

These meals look outstanding. It’s become somewhat lost on people how important diet is when it comes to treating diabetes successfully. Nice little article here that talks about a Greek method of handling type 2 diabetes and all the focus is on ingesting the correct foods. Well worth the read, I’ll link below.

Thanks for sharing such beautiful information with us. I hope you will share some more information about broccoli. Please keep sharing.
Benefits Of Broccoli Juice