Leeks : A Versatile Member Of The Allium Family : Some Recipes 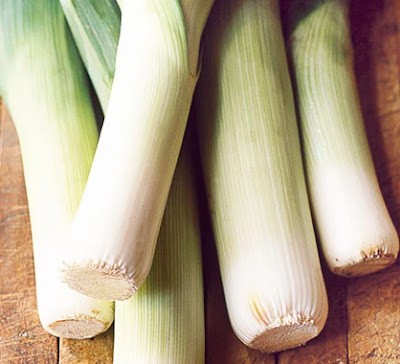 What is a leek?
Like garlic and onion, leeks are a member of the allium family, but have their own distinct flavour – quite harsh when raw (only very young leeks are eaten this way) but, when cooked, very delicate, like a mild onion with a hint of sweetness. Two thirds of their length is white and firm, and this is the part that is mainly eaten. The rest is made up of the leaves (flags), most of which are discarded.

Leeks are very versatile and work well cooked in various recipes or as a side dish. Two of the world’s most famous soups, Scotland’s cock-a-leekie and France’s crème vichyssoise, are based around them.
How to prepare a leek
Thorough washing is very important for leeks, as soil is often trapped between the many layers of leaves. First, trim off the base, and cut away the uppermost part of the leaves. Remove the outer layer or white, if it’s tough. Then, if you want to keep the leek whole, use a knife to make a slit from the top to the point where the green meets the white, cutting through the centre. Rinse well under running water, pulling back the layers so that any dirt at the base is removed. Alternatively, slice the leeks, then put in a colander and wash well under running water.
How to cook leeks
Steam (up to 8 mins for sliced; up to 16 mins for whole). Pan-fry for up to 8 mins, sliced. Also good as an ingredient in casseroles, tarts, pies and soups.
How to store leeks
In the fridge, for up to a week. As their strong aroma can taint other foods, make sure they are well wrapped.
When are leeks in season?
You can find leeks year round, but they are at their best from September to March.
Choose the best leeks
Look for leeks with a firm, unblemished white lower part, and leaves that are bright green, with a crisp texture. Smaller leeks tend to be sweeter and more tender.

Alternatives to leeks
Try onion.
Words above from article here

Brief Re-cap
Leeks are from the allium family like onions and garlic, but have a much sweeter, milder flavour. According to legend, seventh-century Welsh soldiers wore leeks in their hats to distinguish them from the enemy army. Ever since, the allium has been a Welsh national symbol. Choose leeks with bright green tops and trim the root and leaf tops before rinsing well to remove grit and soil.
Some recipes you may like to try: 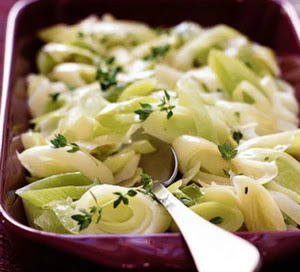 Buttered Leeks
5g carbs per serving
Ingredients
Serves 8
1.8kg leeks, trimmed
50g butter, plus extra for serving
thyme leaves for garnish
Method
The day before you want to serve this dish, cut the leeks from top to root and wash thoroughly under cold running water. Thinly slice them on the diagonal and put into plastic bags and chill until ready to cook.
To serve, put a large pan over a medium heat, add the butter and let it melt over the base of the pan. Add the leeks and plenty of seasoning and stir to coat in the butter. Turn the heat down to low, cover the pan and cook the leeks gently for about 15 minutes, stirring half way through until they are tender.
Serve with extra butter and a sprinkling of thyme leaves
from original idea here 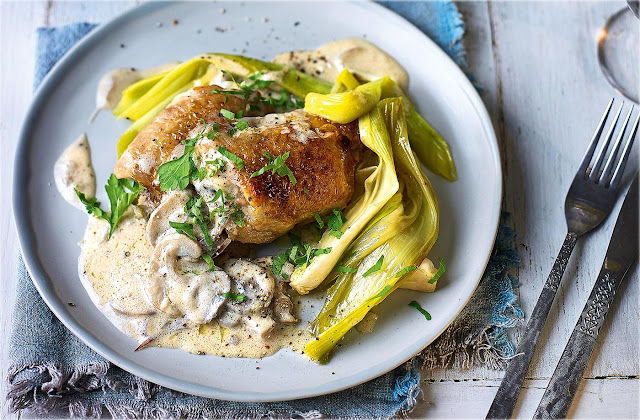 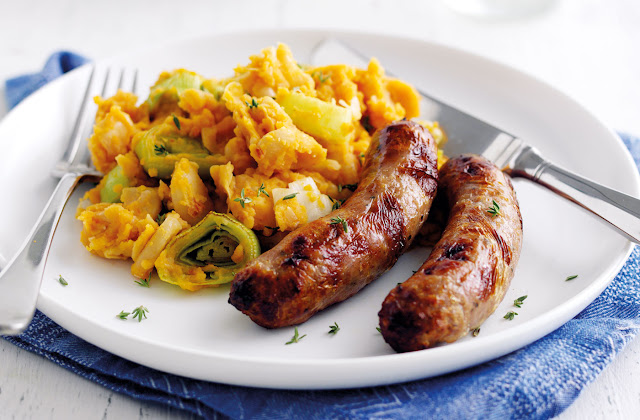 Sausages with tomato, leek and butter bean mash
with nutritional details as follows
Carbohydrate 28.4g Protein 26.9g Fibre 8.3g Fat 9.4g
more details here
This blog brings a variety of articles and recipe ideas, and it is important to note, not all may be suitable for you. If you may have any food allergies, or underlying health issues these must always be taken into account. If you are a diabetic and not sure how certain foods may affect your blood sugars, test is best, i.e. use your meter.

All the best Jan
Posted by Lowcarb team member at 18:37

I have never eaten a leeks before. Interesting.

The recipe with sausage looks really good! We love all kinds of sausage here. :)

Jan I haver to be honest I am not a big fan of leeks but these recipes you shared made me want to try them! I did try some leek dishes while I was in Korea and I did like it but the ones here in the Philippines has a very strong taste. Hope you are well this week :)

I have never made leeks or had a dish in which I noticed them. I am intrigued. I will have to try them this fall or winter. Thanks for sharing. :)
~Jess

I've never cooked with leeks. Thanks for all the info.

I love leeks. I haven't had any lately.

All those dishes look so good. I question whether I have ever had a leek. I might have in a dish somewhere and didn't know about it. Glad you described what they taste like - i think i would like them.

As much as I love onions, I am sure I would enjoy using leeks...

I use leeks in soup and they are delicious!

Rather partial to leeks and leek soup is tasty.

I love leeks. They're not often on the menu as Mick isn't keen, but we do have them occasionally.

I've had leeks a couple of times and I like them. They are hard to find where I shop for groceries, though.

I love leeks they add so much flavour, all those dishes look so tasty. x

I do really like leeks. My favourite is potato and leek soup. Yum!
I do love the idea of your recipes here, so will give them a try!
Many thanks.😊😊

Have a good day!

i have found leeks difficult to clean, but i do like the flavor they add!!

I love leeks! I make leek and potato soup often in the fall. And I've made leek sausages too. The only thing I don't like about them is they stink up the deep freezer no matter how well I seal them up! :)

I use leeks in soups and casseroles all the time Jan, but I've never really thought about them as a dish in their own right, I like the idea of the buttered leeks very much 💜

I like leeks. The sausage and leek with butter bean mash recipe sounds great.

I'd never even heard of leeks until I got married (about a million years ago) but they are one of my favourite vegetables now, especially in a nice creamy sauce, yum! Take care both of you, Sue xx

I love leeks. The buttered leeks sound really good -- and so simple!

I just bought some leeks today. And this was a great refresher as I haven't cooked with them for awhile. The tomato, leek and butter bean mash looks delicious!

It's been years since I've had leeks. The recipes you've shared are delicious, so I might be using them soon.

I love the seasons. They grow in my garden. To prepare: Sausages with tomato puree, leek and beans.
Hugs and greetings.