Nutmeg - Is it the forgotten spice? 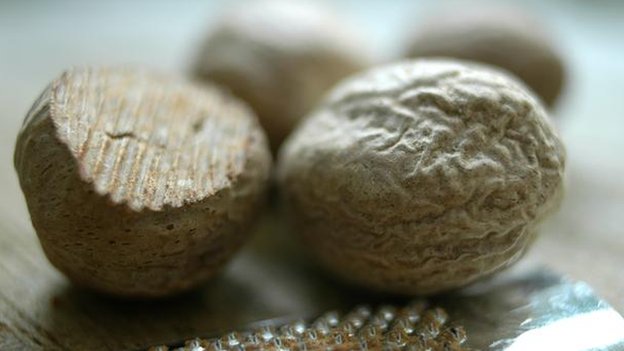 I wonder do you use nutmeg in your house? When growing up my dear Mum made the most delicious tasting rice pudding always topped with nutmeg, it was a once a week family favourite. Nowadays, rice pudding does not appear in my menu plans ... it sends Eddie's blood sugar numbers too high. Instead there are other ways to incorporate this spice - in soups, with low carb vegetables - it's amazing how you can use spices and herbs to enhance cooking flavours.

In a BBC article about nutmeg these words - "There are few spices more evocative of Christmas than nutmeg. But why is the ingredient relegated to the back of the cupboard for the rest of the year?

"It's a winter spice... nutmeg to me is about warm, cosy kitchens, it's about log fires, it's about drawing the curtains, opening a book, wrapping presents."

Freshly grated into mulled wine or eggnog, the spice's rich aroma fills many kitchens in December.

Nutmeg trees produce two spices - nutmeg and mace. Both are extracted from the trees' fruits: nutmeg is a brown seed, while mace is the red membrane which grows around the shell of the seed.

Although nutmeg can be bought as both a whole and ground spice, Nigel Slater says grating the whole nut with a small grater releases a superior flavour.

The smell is "almost pine-like", he says. "It is one of the magical smells."

Whole nutmeg works particularly well grated on top of rice pudding, and it is delicious when added to a custard tart and cream desserts, says Mr Slater. (It works well in this recipe too - use nutmeg in place of cinnamon - or even consider a mix)

But for many people Christmas is the only time to use nutmeg in the kitchen.

Once one of the most sought after spice in the world, today nutmeg often lies sitting in cupboards, unused, for months.

"For me nutmeg is a very old fashioned spice. It's one that isn't used very much now," says Mr Slater.

Perhaps it is because the sweet, gentle tone of nutmeg is the antithesis to the fiery, pungent flavours of spices people in Britain love cooking with today such as chilli and ginger.

Chilli products for example, are in high demand, and an increasing number of British farmers now grow the crop.

"If you think of the spices that we use now, we use them I think for excitement," argues Mr Slater.

Nutmeg is thought to have been imported into Europe during the 12th Century by Arab merchants. But by 400 years ago it had become the most valuable spice in the world.

In the 17th Century, displaying a bowl of nutmeg in your home was a sign of immense wealth, says Giles Milton, author of history books including Nathaniel's Nutmeg, an account of English adventurer Nathanial Courthope.

"Nutmeg was the ultimate luxury," says Mr Milton. "Of all the spices, nutmeg was the most elusive to find and it was also the most valuable."

But a dark history surrounds the spice.

"Hundreds maybe thousands of people died - were slaughtered - fought in battles over this spice," says Mr Milton. "And all to satisfy the tastes of the elite."

The Portuguese found the spice growing on the Banda Islands of Indonesia (Spice Islands) in 1512.

At the time, nutmeg trees grew on only six remote islands in Indonesia and the east indies.

By the early 1600s Dutch troops had control of the nutmeg trade. But in 1616 English trader Nathanial Courthope and his men took over the Island of Run, and struck a deal with native chiefs to ensure the English would keep control of the island and send nutmeg back to the UK.

Today nutmeg trees are grown much more widely. In the Caribbean, the centre of the nutmeg trade is the island of Grenada.

Most of the nutmeg growing there is exported but the spice is also much-used in Grenada in the cuisine and as a medicine. In Grenada "You use it on meat, you use it in soup, you use it in bread, we use it in everything."

Nutmeg has been used as a medicine in some parts of the world for centuries.

In Grenada it is commonly used to treat a range of ailments such as aches and pains and arthritis.

The island's nutmeg industry was devastated in 2004 by hurricane Ivan.

Many trees on the island were flattened and it will still take several more years for new ones to reach full production (around 300lbs of nutmeg from each tree).

One silver lining however is that farmers have reported a better quality of nutmeg being produced by their post-hurricane trees.

Nigel Slater says he would love to see nutmeg regain popularity, and be added to a wider variety of dishes.

"The thing about nutmeg is that it keeps very well. Particularly as a whole spice. It's there. It's sitting in your cupboard." 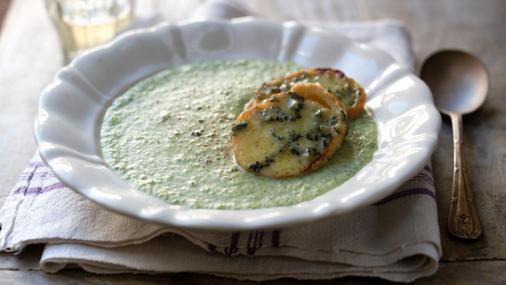 For the croûtons (optional*)
4 slices French bread ( you may prefer to use a low carb alternative bread)
100g/3½oz Stilton, sliced

Method
1. For the soup, place the pieces of broccoli into a glass bowl. Pour over the vegetable stock.
2. Cover the bowl with cling film and place in the microwave. Cook on full power for four minutes, or until tender.
3. Meanwhile, heat a frying pan until hot then add the butter. When it starts to foam, add the spring onions and cook for one minute.
4. Transfer the cooked broccoli and stock to a food processor. Add the fried spring onions, Stilton and cream and blend until smooth.
5. Transfer the blended mixture to a pan and bring gently to a simmer.
6. Meanwhile, for the optional* croûtons, toast the French bread under a grill until golden-brown on each side.
7. Top the grilled bread with the slices of Stilton and return to the grill until golden-brown and bubbling.
8. Season the soup with salt, freshly ground black pepper and a pinch of nutmeg.
9. Divide the soup equally among four warm bowls and top each with a Stilton croûton. Serve.

We bring a variety of articles, studies etc. plus recent news/views and recipe ideas to this blog, we hope something for everyone to read and enjoy.
Please note, not all may be suitable for you.

If you may have any food allergies, or underlying health issues these must always be taken into account. If you are a diabetic and not sure how certain foods may affect your blood sugars, test is best, i.e. use your meter.

Thanks for reading - and please share your thoughts about nutmeg.

All the best Jan
Posted by Lowcarb team member at 10:51

I must admit that nutmeg is something I've never used. Perhaps I should have some at the ready for the mulled wine over Christmas.

Interesting, I use nutmeg in our oatmeal. Thanks for the delicious recipe!

Wow!!! Who knew all this about nutmeg. You make me want to dash out and get some. I love knowing the background of things. It makes them so much more interesting. Wishing you guys an amazing Thursday. Hey and thanks for this.

I will have to say I have only used it in a few deserts, we are more cinnamon kind of people, great ideas for using it in other than sweets :)

As they say, the dose makes the poison. The toxic dose is somewhere north of two tablespoons, according to an article at the New York Times

Nutmeg isn't used in our family but I am now tempted to try it. I love rice pudding but hubby cannot eat it.
Jan, you always post such delicious looking recipes that I leave here hungry :)

Have a Great Day~

Love the aroma...makes me think of pumpkin pie!

I love nutmeg and use the whole nut grated. I have a little grater that I store the nut in. I was not aware of the history---very interesting! I hope your week is going well. ♥

I use nutmeg a lot and it does make a dish delicious and you only need a little amount.
One of my early memories as a little girl was making junket with a grating of nutmeg on top. Thanks for sharing this interesting post.
Hope you are having a lovely week and many thanks for visiting me
hugs
Carolyn

Hi Jan,
I use a lot of nutmeg. I use it in a lot of baking all year long. I make a carrot muffin that calls for a Tablespoon of nutmeg! :-) I also like to sprinkle it on my Eggnog :-)

How interesting! I'll have to get mine out and use it. I use cinnamon every day in my oatmeal but I forget about nutmeg. Hugs!

Nutmeg is an important ingredient for making goodies around the holidays. I also put a dash on my eggnog. The smell is very nice.

I love nutmeg and have a little jar of whole nutmeg(s)? with a little grater in my spice cupboard. It's so much better freshly grated than pre-ground. I like it in meatballs - adds a hint of warm spice to a savory dish.

I've been using nutmeg every now and then for years.

I do use nutmeg from time to time, I enjoyed learning more about it. Happy December, Jan.
Amalia
xo

Very interesting! We too use nutmeg, in pasta, for example making tortellini.
Thinking of this, I remembered the metal jars in my mother's kitchen when I was a child. Oh no, I must go to see if some could be still found! :)

I used nutmeg today in the pumpkin bread that I made.

i actually use nutmeg a bit. i remember listing to martha stewart say the same thing. i use it in all cream sauces and always in mac and cheese!!!

We use nutmeg, but I think we should be using it more! Thank you for such great recipes!! Big Hugs!

I am determined to try new foods. I think rice pudding which you mentioned at the start of this post is one of these things, especially with nutmeg.
Lisa x