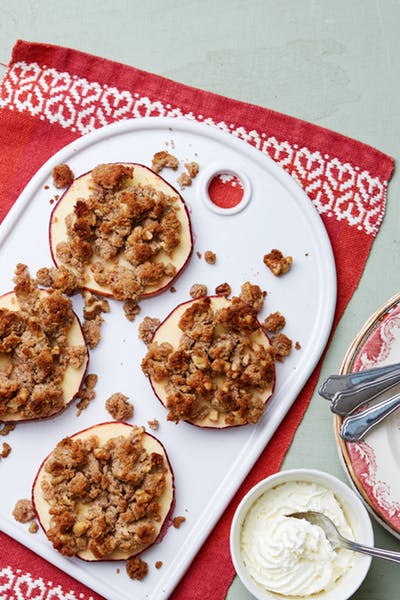 Note:
These baked apples can be served with whipped cream, full-fat crème fraiche, mascarpone, or a slice of cheddar. If you’re allergic to nuts you can simply exclude them or substitute sunflower or sesame seeds to keep the crunch.

Did you know ... Cinnamon is a popular spice often associated with baked treats, cereals and smoothies. However, you may not have considered that the teaspoon of cinnamon that you add to your baked treats may be doing you more good than you realized. Studies have shown that cinnamon could assist with boosting brain function, fighting cancer, aiding in digestion, supporting weight loss and fighting diabetes.

It also adds flavour to the recipe featured above ...

All the best Jan
Posted by Lowcarb team member at 10:48

This sounds wonderful and fits my lifestyle, too. Thanks for sharing this recipe, Jan.

Much nicer than the plain baked apple. I'll have to try this one, thanks Jan.

Hello, apples and cinnamon are two of my favorite things. The smell of baked apples is wonderful. Thanks for sharing. Happy Thursday, enjoy your day!

Delicious recipe.
I love the combinations.
Cinnamon is an absolute favourite of mine.

I have coconut milk with a sprinkling of turmeric and cinnamon before I go to bed.
Always sleep well.

It looks delicious though I'm not a lover of cinnamon so I'd have to leave that out.

such a beautiful and delicious treat!

I love the smell of cinnamon but a friend of mine can't bear it. I have to tey and remember that come Christmas time and not having scented candles when she visits!
Lisa x

I'm sure I could smell this while reading, so yummy. Hugs, Valerie

Cinnamon in a bake is one of the most comforting smells I can think of.

Sounds like a great recipe. I will definitely try it.
A friend suggested sprinkling cinnamon on coffee grounds just prior to turning on the coffee maker. It's really good.

This looks so good and we will love it. A former neighbor shared with me once about the benefits of cinnamon, also.

Oh wow, does this sound delicious. Cinnamon is so tasty and one of my favorite things in baked goods. I've read about the benefits of using it and love knowing that! Have a wonderful evening. ♥

You share the lovliest recipes Jan, thank you for another winner.

That looks good. Definitely different than the way I've been doing it. Looking forward to trying this.

wow, looks SO good! thanks for the link

So yummy! Baked apples are delicious. And the house smell really good when you're making thema!

I am a fan of cinnamon. I did not know about all the benefits. Thank You!

Love me some apples!

Looking good and I bet they taste good.

Looks and sounds so yum! Thanks for the recipe!

I love them, they are worth for scrumping.

Must get some coconut flour and give this a try.

I´ll keep this one in mind!

what a delish idea!

Happy Weekend to you,
A ShutterBug Explores,
aka (A Creative Harbor)

Happy Weekend to you,
A ShutterBug Explores,
aka (A Creative Harbor)

what a great idea and topped with mascarpone, oh that would be awesome!!!

That looks very yummy! Thanks for the information on cinnamon. I love that spice.

Apple crisp was one of my favorite desserts before going Keto. I could still eat this on occasion now that I am maintaining and not losing weight. I saw a recipe the other day for mock apple crisp using zucchini for apples and I'm intrigued by that idea. Just not sure I want to attempt it. LOL It would take a lot of flavor to make me think zucchini is apple. Hmmm. Have a great weekend.

MMMm that sounds delicious, going to give this a try

I swear I can smell them from here, delightful.xxx