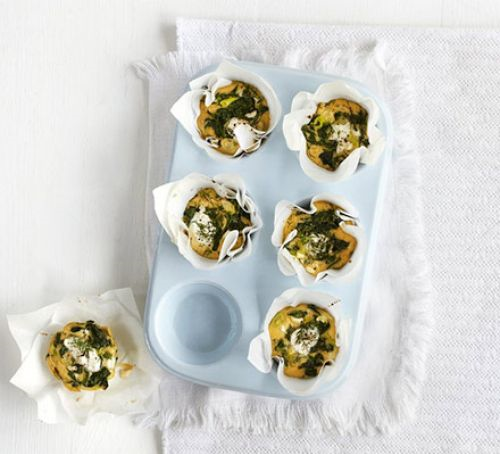 Oh so delicious ... small omelette bites that are ideal for lunchboxes ... dill, nutmeg and spring onion keep them flavour-packed, but they're still good for you!

Method:
1. Heat oven to 180C/160C fan/gas 4. Lightly grease a 6-hole muffin tin and line with squares of baking parchment to act as muffin cases (greasing the tin first will help to hold the parchment in place).
2. Put the spinach in a colander in the sink and pour over a kettle of boiling water, then leave to drain. When cool enough to handle, squeeze as much liquid as you can from the spinach, then roughly chop.
3. Beat the eggs and season well. Marble through the spinach, cottage cheese, spring onions, dill and a generous grating of nutmeg. Divide the mixture between the muffin cases. Bake for approx. 25 minutes or until just set. Leave to cool a little before removing from the tin.

Note:
These will keep in an airtight container in the fridge for up to 2 days.

This recipe uses nutmeg - is it the forgotten spice?
Nutmeg is thought to have been imported into Europe during the 12th Century by Arab merchants. But by 400 years ago it had become the most valuable spice in the world.

In the 17th Century, displaying a bowl of nutmeg in your home was a sign of immense wealth, says Giles Milton, author of history books including Nathaniel's Nutmeg, an account of English adventurer Nathanial Courthope.

"Nutmeg was the ultimate luxury," says Mr Milton. "Of all the spices, nutmeg was the most elusive to find and it was also the most valuable."

But a dark history surrounds the spice.

"Hundreds maybe thousands of people died - were slaughtered - fought in battles over this spice," says Mr Milton. "And all to satisfy the tastes of the elite."

The Portuguese found the spice growing on the Banda Islands of Indonesia (Spice Islands) in 1512.

At the time, nutmeg trees grew on only six remote islands in Indonesia and the east indies.

By the early 1600s Dutch troops had control of the nutmeg trade. But in 1616 English trader Nathanial Courthope and his men took over the Island of Run, and struck a deal with native chiefs to ensure the English would keep control of the island and send nutmeg back to the UK.

Today nutmeg trees are grown much more widely. In the Caribbean, the centre of the nutmeg trade is the island of Grenada.

Most of the nutmeg growing there is exported but the spice is also much-used in Grenada in the cuisine and as a medicine. In Grenada "You use it on meat, you use it in soup, you use it in bread, we use it in everything."

Nutmeg has been used as a medicine in some parts of the world for centuries.

In Grenada it is commonly used to treat a range of ailments such as aches and pains and arthritis.

The island's nutmeg industry was devastated in 2004 by hurricane Ivan.

Many trees on the island were flattened and it will still take several more years for new ones to reach full production (around 300lbs of nutmeg from each tree).

One silver lining however is that farmers have reported a better quality of nutmeg being produced by their post-hurricane trees.

Nigel Slater says he would love to see nutmeg regain popularity, and be added to a wider variety of dishes.

"The thing about nutmeg is that it keeps very well. Particularly as a whole spice. It's there. It's sitting in your cupboard."

You will find a variety of recipe ideas within this blog. Please note, not all may be suitable for you. If you may have any food allergies, or underlying health issues these must always be taken into account. If you are a diabetic and not sure how certain foods may affect your blood sugars, test is best, i.e. use your meter.

All the best Jan
Posted by Lowcarb team member at 10:27

that sounds good and this is fascinating to read about Nutmeg, I can certainly attest to whole over ground, I bought some ground nutmeg a few weeks ago and it had half of the potency of the whole seed ground,, won't buy pre ground again,,

I love nutmeg and those are the cutest frittatas.

They look lovely, ideal for a buffet too.

I love nutmeg. I have some whole that I grate on occasion. And I simply ADORE this recipe. It has my name all over it! Thanks for sharing, Jan.

The frittatas look great. Nutmeg really does add a lot to a dish. Thanks for the history! I had no idea. ♥

Oh my cod, my mouth is watering!

Delicious and so adorable! What a lovely treat.

Jan...food that sounds and looks tasty and is healthy, too!!!
Four thumbs up👍👍👍... hubby's and mine💮

Looks yummy. I would go with more spring onions.

Oh those sound so good. I will have to give those a try. I need to start making things like that, lite and filling. THanks for sharing and thanks for coming and leaving such a sweet comment on my blog. I look in the mirror everyday and I know I lost weight but it is not till I see a pic of me that I realize that that 70 lbs is so noticeable!

Oh.....I can't tolerate cottage cheese, what is a good substitute, if there is one please!

Oh, I would definitely like to try this one, thank you! I never knew that about the spice...

Recipes like this put me in mind of summer picnics, can't wait!
Lisa x

Carol Blackburn said:
"Oh.....I can't tolerate cottage cheese, what is a good substitute, if there is one please! "

Hello Carol, and thanks for your comment.
This article may help you, do please use the link and have a read
'How Do I Choose the Best Substitute for Cottage Cheese?'
www.wisegeek.com/how-do-i-choose-the-best-substitute-for-cottage-cheese.htm

That is nice, lovely, tasty and for the vegetarian, you can't beat it.

Yes, I would like some right now please! Thank you Jan! Big Hugs!