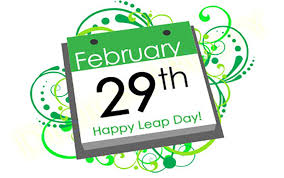 I came across this article by Ellen Castelow and thought it quite interesting! As today is the 29th February, I thought I'd share it here ...


Thirty days hath September,
April, June and November;
All the rest have thirty-one,
Excepting February alone
Which hath but twenty-eight, in fine,
Till leap year gives it twenty-nine.

Our everyday calendar is an artificial medium that has been juggled with through the centuries in an effort to make it more accurate and more useful. The time it takes for the earth to rotate is 365 ¼ days but the calendar year is 365 days, hence once every four years to balance this, we have a leap year and an extra day, February 29th.

Because such years are rarer than normal years, they have become lucky omens. Indeed the 29th February itself is an especially important day. Anything started on this day is sure of success.

Certainly February 29th in the leap year of 1504 was very successful for one Christopher Columbus. 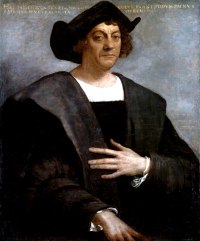 The famous explorer had been marooned for several months on the small island of Jamaica. Though the island natives had initially offered food and provisions, Columbus’ arrogant and overbearing attitude had so annoyed the natives that they stopped this altogether.

Facing starvation, Columbus came up with an inspired plan. Consulting a shipboard almanac and finding that a lunar eclipse was due, he called together the native chiefs and announced to them that God would punish them if they did not supply his crew with food. And as an omen of God’s intent to punish them, there would be a sign in the sky: God would darken the Moon.

Right on cue, the lunar eclipse started. Columbus dramatically disappeared into his cabin as the natives began to panic and begged him to restore the Moon. After more than an hour, Columbus emerged from his cabin and announced that God was prepared to withdraw his punishment if the natives agreed to supply him and his crew with everything they needed. The native chiefs immediately agreed, and within minutes the Moon started emerging from shadow, leaving the natives in awe of Columbus’ power. Columbus continued to receive food and supplies until he was rescued in June 1504.

For women, February 29th can also be a very successful day, as once every four years on the 29th February they have the “right” to propose to a man.

The right of every women to propose on 29th February each leap year goes back hundreds of years when the leap year day had no recognition in English law (the day was ‘leapt over’ and ignored, hence the term ‘leap year’). It was decided that the day had no legal status, meaning that a break in tradition on this day was acceptable.

So on this day, women can take advantage of this anomaly and propose to the man they wish to marry.

In Scotland however, to ensure success they should also wear a red petticoat under their dress – and make sure that it is partly visible to the man when they propose.
For those wishing to take advantage of this ancient tradition, 29th February is your day!"
The above taken from article here

For those readers who like recipe ideas, here are three …
Bangers (sausages) and celeriac mash with roast fennel and green beans - see here
Beef burger, served with Cheesy Leeks and Mushrooms - see here
For those who may prefer a vegetarian meal option:
Cheesy Cauliflower alla Vodka Casserole - more details here

Dear reader, you will find a variety of articles and recipe ideas within this blog. It is important to note, not all may be suitable for you. If you may have any food allergies, or underlying health issues these must always be taken into account. If you are a diabetic and not sure how certain foods may affect your blood sugars, test is best, i.e. use your meter.

All the best Jan
Posted by Lowcarb team member at 10:44

Thanks for interesting information of 29th Feb. I didn't know women used to have only one chance of propose in four years. Happy Sunday to you.

WOW...I found all these facts really fascinating!!
And now, I think I will begin all my shelved goals today (gosh, I'm going to be busy!😉)
Thank you so much for this...😊😊

I"ll be watching Pirates of Penzance to celebrate the day :)

Look before you leap or you'll end up with the wrong mother-in-law.

Did you know the earth is slowing down even more now? Look up leap second:
https://en.wikipedia.org/wiki/Leap_second

Interesting - women can ask men to marry. My birthday was two day ago!

There was a very sweet romantic comedy a few years back called Leap Year, with Matthew Goode, about the lady proposals. I thought it was a fun idea.
Amalia
xo

Fun facts I wasn't aware of.

Well I didn't know it was a lucky day, I would have bought a lottery ticket! Have a great week x

Didn’t Columbus also bring a whole bunch of diseases to the people of the “new world” as he searched for gold? He really paid back their kindness in the most horrible of way.

These are fun facts and traditions! Happy Leap Year!

wow this was splendid post dear Jan :)))
i enjoyed reading bit of it
knowing how it worked for ancient women is amazing and amusing
thank you for wonderful post
happy March :)

I love these posts, so interesting, I always learn something new.xxx

Love the stories, very interesting, my luck I would find someone I wanted to marry and have to wait almost 4 years to ask, LOL!