It's just one week until Valentines Day, and out shopping recently there were so many around the special 'Valentines' aisle in the supermarket. You could see them wondering what may be the best gift to buy. Shall I buy this ... err no - perhaps this one would be better. Call me an incurable romantic but shouldn't every day be Valentines Day?

Yes, "February 14th has become one of the key dates on the commercial calendar, with romantic Brits spending an estimated £1.5 billion on cards and gifts (and Americans as much as $19.6 billion). But behind the commercialisation of Valentine's Day lies a fascinating history that can be traced back to ancient Rome. 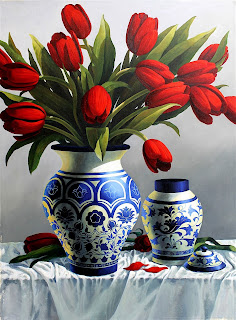 When was Valentine’s Day first celebrated?
From 13 to 15 February, ancient Romans celebrated the feast of Lupercalia. Many believe that the origins of Valentine’s Day can be traced back to this ancient fertility festival. To mark the occasion Roman men sacrificed goats before using their skins to whip women in the belief that this would make them fertile. Some historians have argued that at the end of the 5th century, Pope Gelasius I declared 14 February to be Valentine’s Day in an attempt to reclaim this festival from the Romans and Christianise it. It’s not clear which St Valentine this day was initially dedicated to, as two saints with this name share the feast day of 14 February. Both of these saints were martyred in Rome; Valentine of Terni in around AD 197 and Valentine of Rome in around AD 496.

The next milestone in the history of Valentine’s Day came in 1382, when Geoffrey Chaucer wrote his poem Parlement of Foules. This poem contains what is widely reported to be the first recorded instance of St Valentine’s Day being linked to romantic love.

It was also a 15th-century Frenchman who committed the earliest surviving Valentine’s greeting to paper. While imprisoned in the Tower of London following the 1415 battle of Agincourt, the Duke of Orleans wrote to his wife, which translates roughly as, “I am already sick of love, my very gentle Valentine”. This remarkable letter survives in the manuscript collections of the British Library, which also holds the oldest surviving Valentine’s letter in the English language. This dates from 1477 and was sent by one Margery Brews to her fiancé John Paston. In this letter Margery describes John as her “right well-beloved Valentine”.

By the 17th century Valentine’s Day gets a mention in Shakespeare’s Hamlet.

However, it was in the 18th century that the most familiar Valentine’s poem made its first appearance. These lines, found in a collection of nursery rhymes printed in 1784, read:

The rose is red, the violet’s blue,
The honey’s sweet, and so are you.

While this was the first appearance of the poem in this form, its origins reach back to Sir Edmund Spenser’s 1590s epic, The Faerie Queene.

The first Valentine’s cards
The first Valentine’s cards were sent in the 18th century. Initially these were handmade efforts, as pre-made cards were not yet available. Lovers would decorate paper with romantic symbols including flowers and love knots, often including puzzles and lines of poetry. Those who were less inspired could buy volumes that offered guidance on selecting the appropriate words and images to woo their lover. These cards were then slipped secretly under a door, or tied to a door-knocker.

It was in Georgian Britain that pre-printed cards first began to appear, though these were not yet as popular as they were eventually to become. Perhaps the oldest surviving example dates from 1797: this card, held at York Castle Museum, was sent by one Catherine Mossday to a Mr Brown of London. It is decorated with flowers and images of Cupid.

The industrialisation of Britain in the early 19th-century brought with it rapid advances in printing and manufacturing technologies. It became easier than ever to mass-produce Valentine’s cards, which soon became immensely popular.

It is estimated that by the mid 1820s, some 200,000 Valentines were circulated in London alone. The introduction of the Uniform Penny Post in 1840 bolstered the popularity of Valentine’s cards yet further: reports suggest that by the late 1840s the amount of cards being circulated doubled, doubling once again in the next two decades.

Many Victorian Valentine’s cards survive, but most intriguing is a collection of more than 1,700 examples that is held at the Museum of London. Typical imagery included flowers, love knots and Cupid. Though hearts were sometimes used, Victorian cards did not feature the ubiquitous red hearts that are so typical of Valentine’s cards today.

The commercialisation of Valentine’s Day

In the mid-19th century the Valentine’s card travelled across the Atlantic. Cards rapidly gained popularity in America, where they were initially advertised as a British fashion. Advanced American technologies meant that more elaborate cards were produced cheaply, encouraging their popularity yet further.

In 1913 Hallmark Cards produced their first Valentine’s card, representing a key development in the commercialisation of Valentine’s Day.

Thanks in large part to marketing campaigns, Valentine’s Day has today become a time not only for sending cards, but for buying flowers, jewellery, perfume and chocolates. And now you know this annual celebration of love is anything but modern."

The above words are from an article by Dr Anna Maria Barry, a cultural historian, you can see her original article with more details and research links here

For those readers who may like to find out even more interesting details about Valentine's Day (and there is quite a lot) why not go across to Mike's, 'A Bit About Britain,' blog. He has a post called 'Be my Valentine' and you can find it here.

How about making these low carb walnut and brandy truffles for your Valentine ... they are simply delicious, more details here 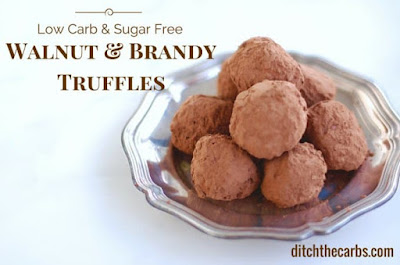 However, not all the recipes ideas featured in this blog may be suitable for you. If you may have any food allergies, or underlying health issues these must always be taken into account. If you are a diabetic and not sure how certain foods may affect your blood sugars, test is best, i.e. use your meter.

I really had no idea of the history behind Valentine’s Day,, it’s amazing isn’t it! Oh these truffles,,amazing!

Interesting background!
We used to "fall" for it back then but these days we show our love when the situation is there. Little things or guestures here and there.

And In Worcester, Massachusetts USA in 1847, the first commercial Valentine's were produced by Esther Howland. She sold her cards through her father's stationery store. 😻

This is not a feast I celebrate, but I would still enjoy those wonderful truffles! Valerie

...that sweet day is coming up soon.

So much history behind Valentine's Day. It's not something we've ever celebrated really.

Hmmm. That's a lot to know about Valentine's Day. The whipping with a goat skin whip was enough! Lets get on to the brandy and walnut truffles! ;)

Isn't it funny - I learn something new every day - interesting.

The truffles look and sound great.
I worry about the commercialisation of so many dates...

Those truffles look delicious! I like to celebrate holidays but I do it by baking my own sweets and making my own gifts! I think it's going to be vanilla cupcakes for Valentine's dessert!

So now everybody knows Valentines Day was not invented by Hallmark.

wow those truffles look so yum, are they low GI?
xx

Not something we generally celebrate but the truffles look delicious.

i enjoyed knowing all about the love day and origin of card :)

what is more valuable than celebrating just a day is Love itself that seems the most dominant feeling of this whole universe and exists since we start to breath :)
lots of love !

Hello Annie, and many thanks for your comment and question.

i have always thought valentines day was a weird holiday, i didn't really get it. but wow, there is a lot of interesting background there!! the truffles look amazing!!!

so interesting reading the history, they keep track of how many cards are bought I wonder how many valentine cards are made.and sent!

The truffles sound quite rich.

Happy Valentine's Day Jan! Your truffles reminded me to go have some chocolates!

Very interesting information about the background of Valentines Day. The truffles look great.