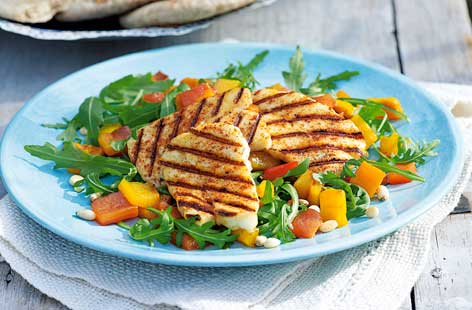 Instructions
1. Grill the peppers, skin-side up, under a pre-heated moderate grill, until blackened. Place in a freezer bag and allow to cool slightly, then peel off the skins and chop the peppers into small pieces.
2. In a small bowl, whisk together the oil and vinegar, season to taste, then stir into the peppers.
3. Sprinkle the paprika on both sides of the halloumi slices. Lightly brush a griddle pan with oil and heat over a high heat. Add the cheese and griddle for 1-2 minutes each side, until lightly charred and starting to melt. Remove from the heat and squeeze over the lemon juice.

4. Divide the rocket leaves between four plates, arrange the peppers on top, followed by the halloumi, and sprinkle with the pine nuts.
5. Serve immediately, and enjoy!

You may like to serve this with some low carb Pita/Pitta Bread, see recipe here 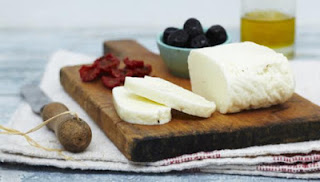 Halloumi is a firm, slightly springy white cheese from Cyprus, traditionally made with sheeps’ milk, although these days mass-produced varieties often use cows’ milk.

In texture, halloumi is similar to a firm mozzarella, making it a popular ingredient in Middle Eastern cooking. Unlike mozzarella, however, it has a strong salty flavour, particularly when preserved in brine.

Buyer's guide:
The best halloumi is made from sheeps’ milk, and will come from Cyprus, although these days you can even find varieties made in Britain.

Storage:
Halloumi will keep in the fridge for many months if left in its original packaging, complete with brine or whey. Once opened, submerge in salt water and refrigerate.

Preparation:
In the Middle East, halloumi is usually fried or grilled to take advantage of its high melting point. Although halloumi can be eaten straight from the packet, some chefs recommend soaking it in buttermilk for a day or two before preparing, to give it a richer, less salty flavour.

Dear reader, a variety of recipe ideas and articles are found within this blog, and not all may be suitable for you. If you may have any food allergies, or underlying health issues these must always be taken into account. If you are a diabetic and not sure how certain foods may affect your blood sugars, test is best, i.e. use your meter.

All the best Jan
Posted by Lowcarb team member at 14:37

Looks very nice and healthy. I wonder if the halloumi can be warmed up or would it get tough?
Thanks Jan

The recipe must be very good!
Thank you for sharing!

It looks delicious. I keep saying that I must get some halloumi to try.

Ohhhh what a great recipe. Sadly I can't get halloumi where I live, but I can think of other ways to use the roasted salad. Have a great Monday.

I read the title, then I thought that was grilled chicken breast. It all looks delicious.

This looks and sounds delicious! Halloumi is relatively new to me, and I do love the way it can be cooked, and the way it squeaks!

Sami said...
Looks very nice and healthy. I wonder if the halloumi can be warmed up or would it get tough?
Thanks Jan

Hello Sami and thanks for your comment and question.
I think Halloumi is a cheese to be eaten almost as soon as it's been cooked!
I've never tried to warm it up and looking around at various recipes I don't think it is a cheese that would suit this.
Perhaps it may suit you to pre-prepare a salad and minutes before it's sit down to meal time you just cook the Halloumi.
I hope you may try this recipe, or this one is also nice:
https://realfood.tesco.com/recipes/grilled-halloumi-cheese-salad.html

Not for me. Halloumi is too salty for me often and I like my capsicums best raw.

I've never heard of halloumi, so I'm glad you explained it. I think I'll stick with mozzarella, though. Less salt.

Hello Jan,
It's always amazing how you made of all food a party.
This food is looking so well.
Wonderful how you've decorated it. You make me hungry again.

Ooh this looks delicious, I love peppers both cooked and raw, and haloumi is one of my favourite cheeses! Have a great week, Sue xx

That is such an interesting cheese. I think I might find it in a nearby store that sells great stuff like this.

I'm not the best fish cook in the world.I so hope I don't blow this one, too!

Halloumi cheese and peppers are the perfect combination. Recommended.

That looks and sound delicious!!!

Yummy (but too cold for salad for me. I certainly again have Brussels Sprouts to make your soup. Just like last week! YUM!)

It does look delicious but not sure I could come at that.

Sounds good, tried it once and liked it.

this must be mind blowing dish with lots of paper :)

unique and tasty indeed ,i will try for sure but i hope i can find all kind of papers around

Hello, the meal looks delicious. I do not remember seeing Halloumi in the store.
I will have to look next shop trip. Have a great day!

wow I have never heard of this stuff, very interesting

I imagine that could be quite spicy.

Wow, halloumi cheese is quite new to me ... actually never heard of. Thanks to letting us know this yummy recipe. I too am trying out low carb diet to ward off potential diabetes that is present in the family. Very informative piece of advices at the end. Definitely will hive it a shot.

I shall try to replicate your recipe with the ingredients I get in India. Paneer will replace Halloumi and coriander will be the perfect replacement for wild rockets. And of course, I'll have to add a little more spice too.