Dr.Michael Mosley is he winding us up?

Last Saturday I wrote a post after reading in the Daily Mail about Dr. Michael Mosley's 5:2 diet to reverse type two diabetes and his new book. On Saturday the diet discussed was and I quote "So I went on what I called the 5:2 diet (eat normally five days a week, then cut calories to around 600 on the other two days), and found it surprisingly manageable. I lost 20lb in 12 weeks and my blood sugar and cholesterol levels returned to normal"

I said regarding the 5:2 diet "Trust me, that will not work for most. Eating 'normally' is what got most people into the diabetes club in the first place, so that will never work. If I had continued to eat 'normally' for five days and starved myself for two days, after my diabetes diagnosis, I know I would have run dangerously high blood glucose numbers for five days of the week and seen a slight improvement in BG on the two days I starved. This would still apply to this day, if I had used the 5:2 diet"

Roll on to Tuesday in the Mail, and Michael is talking a totally different ball game, he is talking a strict low carb diet and 800 calories per day, every day for eight weeks. It is my opinion the average person does not have to go that low on the calorie count. I used around 1200 calories a day for my first 12 weeks of low carbing, using 30 grams of carb per day. When I reached the required weight and non diabetic blood glucose numbers, I returned to approximately 2500 calories per day. My weight has remained stable and seven years on, blood glucose numbers still non diabetic. Diabetes medication unchanged a 2 x 500 Metformin per day.

So, eating "normally" for five days a week appears to have gone out of the window, we are now talking strict low carb, probably less than my 50 carbs per day. But as with the Newcastle diet, what happens at the end of eight weeks? It is my opinion the participants will have to stay on a low carb diet permanently to maintain the excellent improvements most will make.

The question I am asking myself now is, why didn't Michael say on Saturday a strict low carb diet is the way to go, and what was all the 5:2 malarkey all about. One other point, the meals look great, but I reckon many will struggle in today's economic climate to afford some of the ingredients. 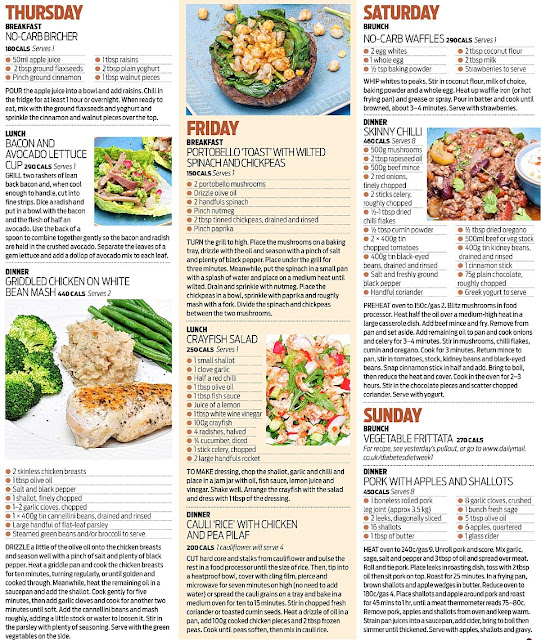 Read more on this story here and here.

Posted by Lowcarb team member at 12:51

My first thought was that the journalist misquoted Mosley saying it was five days of regular eating then two days of low low calorie. But then I think Mosley wrote the article himself.

800 calories a day is probably going to be low-carb, low-fat, AND low-protein.

Why not just talk about a sensible low carb high fat diet/lifestyle that so many informed Doctors, bloggers and ordinary people those with and without diabetes know about.

Oh my goodness - will it ever end? All these "fad diets" and starvation is NOT the way to go. It's nothing more than a way to market books, products, etc.

Remember the Aitkin's Diet? And didn't that guy die of heart disease?

Anyway - moderation is key to anything, I think. Eat sensibly and don't cut out food groups.

Jan, you seem to have a handle on your own health and eating habits - this is the way to go. Listen to your body, exercise and do fun things in life!
Hugs

@Steve "low-carb, low-fat, AND low-protein" is a no-no. @Ben I like your thoughts. @ Wendy No, Atkins didn't die from heart disease but from a serious head injury. Ted

Thanks for the comments.

"Dr. Atkins died On April 17, 2003, at the age of 72. Atkins official death certificate states the cause of death as "Blunt impact injury of head with epidural hematoma".[16] Nine days prior to his death, Atkins fell and hit his head on an icy New York pavement. At New York's Weill Cornell Medical Center, where he was admitted on April 8, he underwent surgery to remove a blood clot from his brain but went into a coma and died from complications. He spent nine days in intensive care before dying on April 17, 2003"