Salad Aveyronnaise : A little bit of France on your table ! 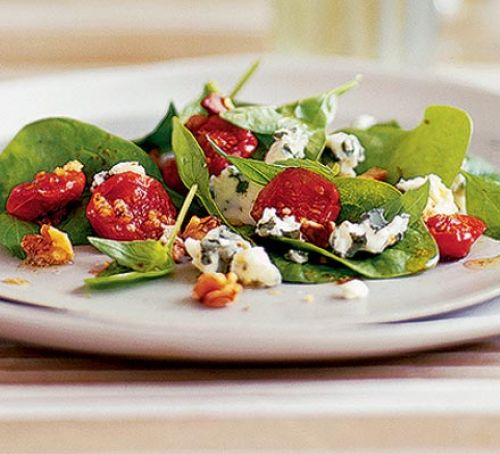 What is salad?
Food historians tell us salads (generally defined as mixed greens with dressing) were enjoyed by ancient Romans and Greeks. As time progressed, salads became more complicated. Recipes varied according to place and time. Dinner salads, as we know them today, were popular with Renaissance folks. Composed salads assembled with layers of ingredients were enjoyed in the 18th century, they were called Salmagundi, today they are called chef's salad.

I happened across this classic warm south-western French salad with bacon, walnuts and Roquefort. It's called Salad Aveyronnaise ... you may wish to try it.

Method:
1. Put tomatoes in a small roasting tin or dish and crush the garlic directly over them using a garlic crusher. Season, drizzle with oil and roast for about 15 mins at 190C/fan 170C/gas 5, until slightly shrivelled. At the same time and temperature, toast the walnuts until glossy and fragrant, about 10 mins, then chop them roughly. Set everything aside in the fridge until ready to reheat.
2. Before serving, heat oven to 110C/fan 90C/gas ¼ Put in the tomatoes, still in their dish, and the walnuts, in a dish or on a piece of foil on a baking tray, to keep warm. Toss the spinach and basil together in a large bowl and season lightly.
3. Heat a little oil in a pan and sizzle the lardons for 3-4 mins until just lightly browned. Transfer to a piece of foil and keep hot in the oven.
4. Stir the dressing ingredients together and pour into a pan, which must not be more than lukewarm. Bring to a boil (the vinegar will smell very strong, so stand back), then pour over the salad and toss again to wilt slightly. Add remaining ingredients to the salad, reserving a few choice crumbs of Roquefort and a scattering of walnuts. Toss and transfer to plates, then top with the remaining cheese and nuts.

Why not read more about Roquefort Cheese here

All the best Jan
Posted by Lowcarb team member at 11:10

Sounds very tempting. Off to see what I can find for my lunch! Hugs, Valerie

Yummy! So easy get so elegant. And it has bacon in it!
I had to laugh this morning, when I turned on my computer, the first thing that popped up was a picture of bacon with the heading "foods you should not eat." Ha! I think the joke is on those who listen to that stuff.
Have a wonderful day.

I enjoy salads. This one does sound yummy and healthy!
Hmm...bacon!!!
Have a lovely day Jan~

Yum. I never have my salads warm. I will have to try a vegetarian variation on this one.

Lovely. I might even get Mick to eat it if there's bacon on it.

that looks sooooo good, blue cheese may be my favorite!!!

Very yummy! But I'll have to skip the bacon.

This looks beautiful, Jan and I actually think I could make this one! ;)

Like all kinds of salads. : ) I'm making one tonight to go along with our pasta.

Sounds lovely, the kind of salad I enjoy xx

Without the bacon I could love this. Thank you.

Reminds me of a cucumber "salad" I had at a Chinese restaurant a couple of weeks ago. Literally, it was an all cucumber salad. No leaves. :-)

Looks great, I would like to try this salad. We have been eating a lot of them lately and this would be a welcome addition. Thanks Jan!

I always forget spinach & walnuts. I'm a fan of roquefort - must have this during the weekend!

No matter what I have eaten, these posts always make me hungry. But they inspire us to eat healthy, so they are invaluable... as well as beautiful. :D
Thank you and have a happy weekend! xx