Don't forget the carrot for its nose !

As regular readers know, this blog is presented in a magazine style - we hope something for everyone. You will find a variety of articles, studies, thoughts, photographs, music and recipes!
Please note, not all the recipe ideas featured in this blog may be suitable for you. If you may have any food allergies, or underlying health issues these must always be taken into account. If you are a diabetic and not sure how certain foods may affect your blood sugars, test is best, i.e. use your meter.
Today's post is perhaps something a little different, sparked by conversations with the younger family members ... yes our grandchildren. Like many other children (and perhaps a few adults) they do enjoy it when it snows, and of course "one of the most popular things to do with snow, other than to have a snowball fight is to build a snowman. The tradition has been passed on from generation to generation, alongside tales of snowmen at Christmas. But why do we dress a snowman a certain way and more importantly why a carrot for a nose?"
Sit down, relax and read on ... "Let’s have a look at the history of snowmen and see if we can find out where the tradition began.
Why do we build snowmen?
We all know snowmen are great fun at Christmas but let’s go a little deeper than that. Let us start with a little bit of background into where the tradition originated.
Throughout history, we have associated the seasons and times of the year with personifications. The winter season in Greek Mythology would have been referred to as “Old Man Winter” and across other cultures, there are similar representations. Jack Frost was one of the first personifications of winter that was written about across literature in the late 19th Century. This is believed to be the reason behind the construction of the snowman. The snowman is another form of Old Man Winter and the tradition of building one has been around for hundreds of years. This character of Old Man Winter was said to leave a frosty air in his presence and be a cold and fierce character, much like the harshness that winter brings. Many of these personalities and traits have fed into our representation of snowmen and this is where his sometimes scary and fierce characteristics come from." (Although I prefer ones with a smiley face)

"Why a carrot for a nose?
Using a carrot for a snowman’s nose is a global tradition when it comes to constructing a snowman. It is unsure why this is a common trend and there are many theories that suggest why we automatically use this vegetable. Some of the earliest depictions of snowmen date back as far as the 1300s and they show snowmen with long pointed noses. It could be that the carrot was used to emphasize this feature of snowmen. They were represented as fierce and cold characters, so a pointy nose was a common way of making them appear harsh.
Much like we associate witches with a hooked or pointed nose, it was important for a snowman to carry these defined characteristics. Other objects have been used throughout history for a snowman’s nose, things such as buttons and coal but the carrot is the most iconic item to use. Traditionally a snowman would have coal for eyes and small pieces of coal to make a mouth. The nose however would have been made from whatever resources were around at the time.
Who was the first snowman with a carrot nose?
The first known snowman character to have a carrot for a nose featured in the German animation “Der Schneemann”, which was created in 1943. In English, “Der Schneemann”, is known as “The Snowman” or “Snowman in July”. This was one of the first representations of a snowman being naïve and that made the audience feel sorry for him.

Throughout history, snowmen were associated with harsh winters and strength, but this was when snowmen started to become adored cartoon characters. This suggests that the tradition originated in Europe and possibly more specifically Germany, as there had not been depictions of a snowman with a carrot nose before this time. Characters that win the hearts of the viewers will then often be represented in their lives, and this could have been the start of the tradition of using a carrot for a nose.
Where do carrots come from?
Another question to help us solve this mystery is looking at where carrots originate. The orange carrots we use on snowmen today were specially cultivated in the Netherlands in the 16th Century. The myth and legend suggest that orange carrots were specifically bred by the Dutch in honour of King William I, also known as William of Orange. Although there is not a large amount of evidence to suggest this story is true, it could have been one of the catalysts for growing orange carrots in Europe. Hence meaning they were widely available and a common vegetable found in the home. This would have meant that alongside coal and a scarf, a carrot became a normal household item to use when building a snowman.
What was used for a snowman’s nose before?
One of the earliest drawings of a snowman is written about in Bob Eckstein’s “The History of the Snowman” [2007]. Eckstein found the drawing in a 15th-century book called “The Book of Hours”, which he found in the Koninklijke Bibliotheek (library) in The Hague, Netherlands. This doodle of a snowman showed a white rounded figure with a pointed nose. It is seen from this drawing that a snowman has a universal shape of being constructed from gathering snow and forming it into circular shapes with a pointed nose. It would have been common to use an icicle for a snowman nose, as they are pointed and seasonal. However, icicles would have likely melted quicker than the snowman itself. Other common items used for snowmen’s noses were buttons, as seen on 1982 animation, The Snowman.
In Conclusion
Snowmen are an important character in creating a winter wonderland and Christmas atmosphere. It is difficult to pinpoint a time in history when snowmen’s noses became carrots, but there are some theories behind it. We choose to decorate them with our household items, and this is different depending on where you are in the world. It could have been that following the release of “Der Schneemann”, people loved the character and wanted to recreate him when building their own snowman. Carrots have also become a widely available and affordable vegetable that is often harvested just before winter. The tradition of using a carrot for a nose has become a global ritual thanks to characters such as Der Schneemann, Jack Frost & Olaf from Disney’s Frozen."
Most words above from original article here
Related Posts
It's Snow-time, let's play! - see here
'Snowy the Snowman' and Summer carrot, tarragon and white bean soup it's vegan, vegetarian, gluten free - see here 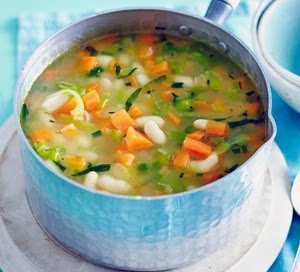 Unfortunately the grandchildren will not be building a snowman this weekend, although the weather is cold they have no snow! This photograph of Grandson was taken a few years ago .. happy smiles and happy snow memories ... I do like his smile and his snowman 😊 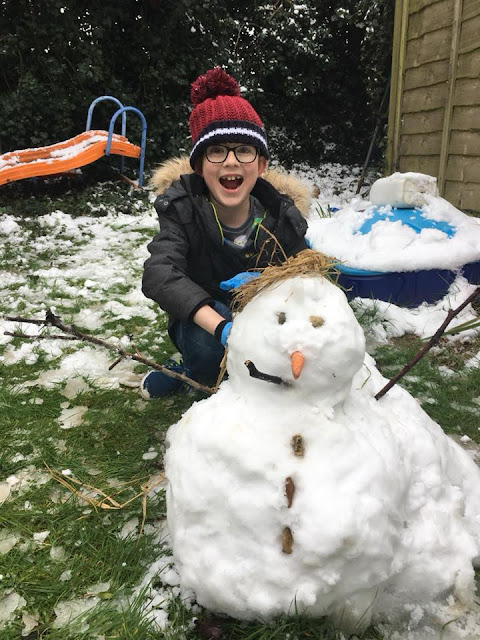 Of course for those readers in the Southern Hemisphere, building a snowman could well be the last thing you have in mind!
Many thanks for reading and whatever your weekend plans are, I wish you a good one.
All the best Jan
Posted by Lowcarb team member at 00:01

...carrots are a favorite vegetable!

Hi Jan, Wow, I’m giving you a high-5 for this post. You have written a great summary of the history of the snowman. The youngster in your last photo puts a smile on my face. Pure happiness! The Summer carrot, tarragon and white bean soup looks delicious! I hope you and Eddie are getting 2022 off to a good start. Thank you for sharing your blog. Best regards from Seattle! John

Nice tribute to the snowman!

How I would love to have weather conducive to snow person building.
Thank you for this informative post.

I often wondered about the reason behind the carrot nose, since we didn't have coal we would raid mom's button jar for big buttons :) But yes we would use a carrot for the nose :)

Always wondered about carrots for a nose. Also leaving carrots for the reindeer at Christmas. I read somewhere they don't eat carrots.

What a fun post, and a lovely photo of your grandson enjoying the snow.

Love the snowmen and cute post and photos.
Have a happy weekend.

Fun post and your grandson looks so cute with his snowman.

Right on time we just had a snow event last night! I think I will skip the snowman building and go straight for the hearty soup! Stay warm...

This is the best post I've read all day! I love snowmen -- they're usually so happy (with a very few exceptions!) But I never knew the background. I just love the photo of your grand with his snowman a few years back. That smile is pure job.

We don't have enough snow to make one now, either, but they are predicting snow for the weekend and next week so you never can tell what will be popping up on lawns all over town in a few days!

There are a lot of snowmen around my area right now as we had snow and then rain and then sunshine. Perfect for building and carrot noses. Fascinating post!

I'm not sure my comment is going thru...if repeated, I apologize

Loved reading the history of the snowman & carrot nose!!

Hello Jan,:=) I enjoyed reading the history of the snowman, and the pointed nose. We don't get snow where I live, but it looks great fun to build a snowman. Your son is really enjoying making one. Such a happy face, and lovely photo. The soup looks so good. I could enjoy it any time, but especially when it's cold outside.

Building snowmen is a fun activity, though around here there's rarely enough snow.

It been ages since I built a snow person.
Coffee is on and stay safe

How interesting to find out about the snowman - I didn't know any of that!!

There's plenty of snow here for that.

What a fun and interesting read. I learned a great deal about snowmen and the carrot nose. It was fun to learn about the history of the snowman and his iconic carrot nose. Loved seeing your grandson from before, too.

So interesting to read about the history of snowmen! Such a fun tradition and the history of the orange carrot is interesting, too. Your grandson looks like he's having a great time. They grow up so fast, don't they? Hope you have a nice weekend - stay safe, take care. xx Karen

awwww....a few years ago, such a cutie!!!!! i hope you get some more snow, building a snowman is such fun!! and we always use a carrot!!