It's October, the tenth month of the year ! 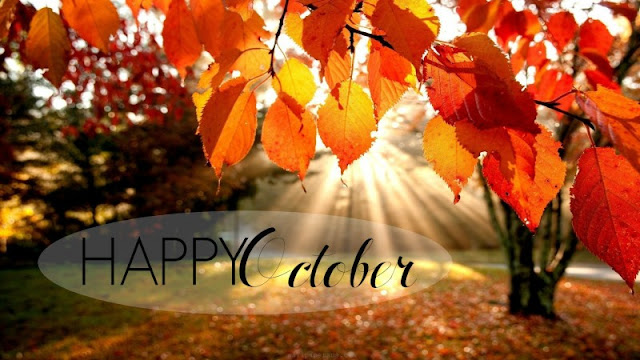 "It won’t be long before we’re deep in October, but what is the tenth month of the year famous for?

Well, did you know it is named after the Latin word for eight — ‘octo’ — as it was originally the 8th month of the Roman calendar? Or that it is the same month Sir Walter Raleigh, Che Guevara and Harold II met their untimely deaths? Or that October is when we celebrate Hallowe’en every year?

You knew that last one, right?

As we’re morbidly fascinated by it, here are our top 10 favourite facts about Hallowe’en!

1. Hallowe’en has its origins in the Celtic festival of Samhain marking the final harvest of the year

2. Why October 31? Because it was the last day of the year in the old Celtic calendar

3. The name is a contraction of All Hallow’s Evening, also known as the night before All Saints Day (“hallow” being the Old English word for saint)

5. Which is why people started wearing masks at Hallowe’en - so the ghosts wouldn’t recognise them!

6. ‘Trick or Treat’ dates back to the 9th century when beggars would knock at houses for a type of biscuit called ‘soul cake’ — in return for a prayer

7. The colours orange and black are traditionally associated with Hallowe’en as they represent harvest and death

8. Samhainophobia is the fear of Hallowe’en

9. According to tradition, if you wear your clothes inside out, and walk backwards on Hallowe’en, you’ll see a witch at midnight!

That last fact is enough to give you a fright, isn’t it?"
Words above from Mary Mocklow here 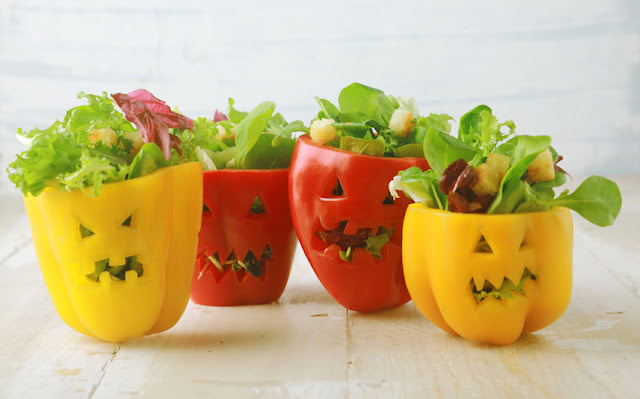 How about some Spookily Friendly Peppers For Halloween !
more details here

Enjoy the month of October
All the best Jan
Posted by Lowcarb team member at 11:06

Another year whizzing by. Love the peppers.

I love those peppers. While I would not eat them, I would eat out of them. Cute idea.

Lots of fun information today. I must try out number 9! Valerie

My favorite time of the years. Yummy peppers. Funny, until I joined WW, I never liked peppers but when I began looking for ways to make my grilled chicken more tasty I began making peppers and onions. Grew to love them.

Wow...those facts are so interesting. Numbers nine and ten are particularly fascinating...and I had no idea there was a phobia attached to Halloween for some people!
And I just adore those peppers...what a brilliant idea! :))

Hello, Happy October to you! The pepper are cute!
Happy Monday, enjoy your day and new week!

When our children were younger we spent Halloween in America.
It was terrifying. They really go to town there, people were literally hiding in shop doorways etc dressed as vampires or the like. My children were petrified.
Boo is enough for me now but I loved all the historical facts. So interesting.

Hello! I Love Halloween,but unfortunately we don’t celebrate it here in Greece!
Thank you for all the information! Like the pepper decorations! So preety indeed!
Wishing you a lovely day and a happy October!
Dimi...

Thanks for the giggle, Jan! Love those peppers.

Happy October! Wishing you a wonderful month ahead.

What a beautiful image.
Around here we always eat a lot of salads.
Thank you for your presence in the house.
Post new all day first.
janicce.

Google Translate:
Although in the south of Spain the temperatures are still high, we are already starting a new autumn.

We really don't celebrate Halloween here. The stores push it but I don't think many people play.

those peppers are brilliant!

Thanks for all those facts! Very interesting. We are approaching my favorite time of year. I’m so glad that summer is over. It was not a nice one! Love the peppers .Have a great month.

Those peppers are too cute! Perfect for the season. I can imagine that lots of money is spent every year on Halloween between candy, costumes, and decor. :)

Happy October to you.

There's actually a term for a fear of Hallowe'en?

I'm not particularly fond of Halloween. I think people have taken it too far. It's fun to have the trick or treaters come to the door and give them candy, but that's about all we do. Maybe we'll make a jack o lantern.
All that money makes me shake my head!

#4 I knew, it´s still creepy. If actually a very good thing as you cannot do anything about dying after all.
#6 was new to me and #9 is hilarious! I might even give it a go!! :-)
Last year we had one kid trick or treating, one!!! It´s not a German thing (yet).

Great info! Here in Tn and all around the states Halloween is a big business. Decorations outside, inside and then the costumes bring the money value in! Personally, I have always LOVED Halloween and fall, so seeing Oct come made me very happy. But I had to ask where Sept went cause it seemed to really fly by!

Happy October to you too. Fun Halloween info and those peppers are awesome. Very creative indeed. Enjoy the day!

What a cute idea with the peppers!

Thanks for the information, it was fun! Those peppers look fantastic.

Fun facts about Halloween! I am amazed how this holiday has grown to such worldwide and epic proportions. I think I read that more money is spent on Halloween decorations now than on Christmas!

Love these peppers and I love fall. We arein spring but my favorite is Fall ! xo

Happy Day to you,
A ShutterBug Explores