"Multiple sclerosis (MS) is a condition that affects your brain and spinal cord. In MS, the coating that protects your nerves (myelin) is damaged. This causes a range of symptoms like blurred vision and problems with how we move think and feel.

Once diagnosed, MS stays with you for life, but treatments and specialists can help you to manage the condition and its symptoms.

More than 100,000 people in the UK have MS. In the UK people are most likely to find out they have MS in their thirties, forties and fifties. But the first signs of MS often start years earlier. Many people notice their first symptoms years before they get their diagnosis.

MS affects almost three times as many women as men. Read the latest statistics on MS in the UK." 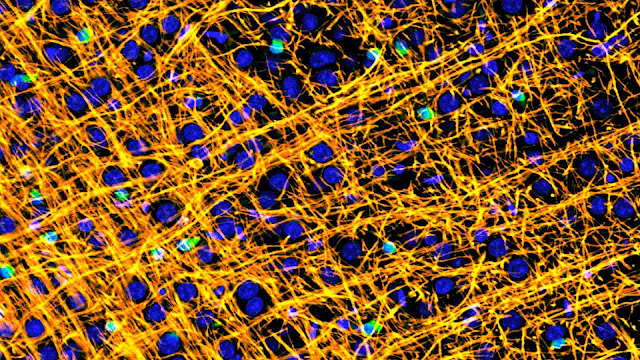 Professor Robin Franklin, from the MS Society Centre for Myelin Repair, described the new findings as "one of the most significant advances in myelin repair therapies there has ever been."

Regenerating myelin
To stop MS, we need to find treatments to repair myelin. But so far we haven't been able to reach this goal.

Our brains have the natural ability to regenerate myelin, the protective fatty coating around our nerves. This repair involves special myelin-making cells which are made from a type of stem cell called oligodendrocyte precursor cells (OPCs). But in MS and as we age, myelin repair stops working as well as it should.

The research published today in the journal Cell Stem Cell shows that this happens because OPCs lose their ability to transform into myelin-making cells.

Mimicking fasting
Building on this discovery, researchers found that when rats were given an alternate day fasting diet (meaning they ate every other day), OPCs returned to a "more youthful state" and recovered their ability to change into myelin-making cells. This led to an increase in myelin repair.

Most excitingly, the commonly-used diabetes drug metformin was able to mimic these effects without any actual fasting.

A significant advance
Professor Franklin said: "As with most regenerative processes, our body's ability to repair myelin declines as we age. The failure to regenerate lost cells called oligodendrocytes is associated with irreversible degeneration in MS, so regenerative therapies have been a long sought after but elusive goal.

"The findings shed light on why cells lose their ability to regenerate myelin, and how this process might be reversed. Although research so far has been done in rats, we hope to move it forward into humans soon.

"MS is relentless, painful, and disabling, and - while it's early days - this discovery could lead us to vital new treatment targets for progressive forms of the condition."

Treatments for everyone with MS
Dr Susan Kohlhaas, our Director of Research, said: "More than 100,000 people live with MS in the UK and many don't have treatment. The treatments that do exist only work on the immune system, and only help people with the relapsing form of the condition. We can see a future where nobody needs to worry about MS getting worse, or eventually needing a wheelchair, but for this to happen we need treatments that repair myelin.

Professor Franklin's research demonstrates myelin repair therapies are within our grasp, and we're closer than ever to finding treatments for everyone living with MS."

The above taken from article here

The UK's MS Society web-site can be found here
If you should know of any helpful web-sites/blogs that could help those with multiple sclerosis, do please share them in the comments.

(h/t to Yoly for bringing this article to my attention)

All the best Jan
Posted by Lowcarb team member at 13:13

...that would be wonderful if it could!

I hope an answer is found soon,

Although a long way off,it is good news to hear research is getting closer to a cure.

It would be so exciting. I know more than one who has dealt with the challenges of MS. This would be good news indeed.

Fingers and toes crossed.
Just the same, I believe that until a cause for MS is found treatments focus more on alleviating symptoms (which vary from time to time and between individuals).

Thanks for this amazing article.

Thank you - that would be wonderful.

thanks for sharing this information.

This is REALLY interesting, my friend. Thank you for sharing.

A very informative post. Thanks for sharing all of this info with us. :)
~Jess

This blog contains so much good information, and/or links to good information. This was really interesting to me since my daughter's friend just found out she has MS 3 or 4 years ago..

Wow, that is really amazing.

i really appreciate your effort to update us about new research about the mental disorder dear Jan!
it is very useful to all of us indeed!
blessings!