A couple of days ago I logged into Twitter to be greeted with this. "Is nutrition the only health subject where accountants, amateur photographers & gym bunnies feel obliged to correct the knowledge of experts?" A tweet from British Dietetic Association Chairperson Catherine Collins no less. I am a professional photographer, my first thought was does she mean me. Over the years I have given the BDA some heavy duty criticism, and was certainly happy to bite the low carb biscuit on that tweet. I replied to her tweet. "Why have dietitians failed totally to stem the tide of the obesity epidemic? Catherine was not amused and replied. "because we don't personally guide every mouthful of food & drink an individual chooses to swallow. But we do in ICU EN pts" So that was me put straight. At that stage another dietitian waded in with lots of waffle on the lines of we don't make the recommendations, so don't blame us.

Now at this stage I started to worry, I had been giving the BDA a tough time for years, had I got it all very wrong. For years I had been told the BDA were experts in dietary information for all sorts of medical conditions regarding diet. Yet two dietitians had said otherwise, certainly as far as diabetics were concerned. I decided to check out the BDA site re. diet for type two diabetics, and found some woeful information. Yet again I saw the 'eatwell plate' loaded with starchy carbs, fruit and even a can of cola on display. But it got worse. The BDA page linked below stated and I quote "The ideal HbA1c is between 48–58mmol/mol" that equates to 6.5 to 7.5 in old money, numbers that no well controlled type two diabetic would be happy with for sure, and over time could well lead to diabetic complications for many.

Well I went back to Catherine and said I felt the BDA dietery information for diabetics was very poor, and that the blood glucose numbers were far from "Ideal" As you can see below, Catherine stated "Eddie. Pur-lease. Check yr facts before tweeting,otherwise undermines yr intelligence. BDA diabetes factsheet? Same as DMUK" Catherine was not the only dietitian that day who stated the BDA did not write the dietary recommendations for diabetics, the BDA recommendations come from Diabetes UK the charity.

So, we have the BDA the organisation of experts on diet, but with no recommendations of their own, passing the buck to DUK. It's my opinion this is a very sad state of affairs, when the one professional organisation that should be leading the fight against type two diabetes and it's often linked obesity, has no dietary information to offer type two diabetics, and relies on a charity whose members are mostly volunteer amateurs. BTW after my tweets to Catherine re. the eat-well plate and "ideal" BG numbers, she blocked me from her twitter account. That seems to be the standard modus operandi from a BDA dietitian when you ask a straight question. I suspect it will ever be thus. 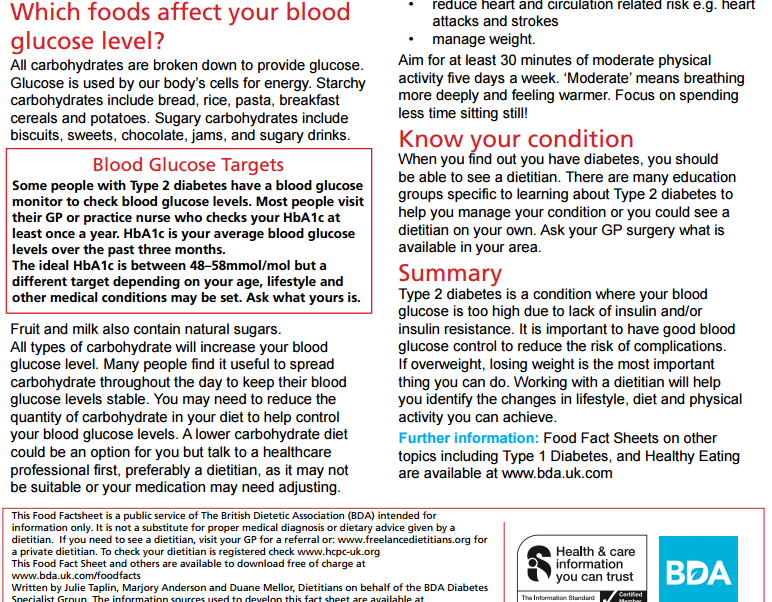 Link to the BDA information for type two diabetics here.

Some of the tweets.

Posted by Lowcarb team member at 13:51

Many health professional and even dietitians are not immune to metabolic deceases and obesity as well, as we can see. The advice to eat a lot of starches for everyone just doesn't make sense.

If this is the attitude of the Chairperson of the BDA. I do wonder what it says about the rest of their dieticians.

Eating too much starch, too much sugar is ill advised and has lead to the rise in obesity and other related diseases. The papers report on this most days. The response you had in your twitter conversation seems childish. Perhaps Ms Collins may comment on your blog?

Thanks for coming by to visit.

All had a good time.

To the anonymous comment "Perhaps Ms Collins may comment on your blog?".
I hope she may open a dialogue, I would think the blog team and the readers would be interested.
Ted.

Just to say thank you to all who have read and continue to read this article.

Thanks to the two persons who left the anonymous comments, and to Ted, Galina and Gail.

To Gail - I am so glad a good time was had by all. They looked so smart ... on your 'To Learn Patience' post on your blog.

These are the facts on the terrible diabetes stats. Only a few diabetics get to safe numbers and diet is a massive part of good control. Most dietitians are clueless, but not all.

These results are very similar to those obtained in previous NHS audits over the past 5 - 6 years.

Why is too hard to understand to health professionals what are healthy blood glucose levels. Why will the body of a person without diabetes will fight to maintain a very tight control of blood glucose numbers way below of what they recommend? But is healthy and ok for diabetics to maintain very high abnormal blood glucose levels with averages over 155 or 8.6 as they recommend. Could it be that without a low carb diet there is no way that normal numbers are possible for a diabetic even with use of very potent drugs, that show no longevity benefit.

I look at it this way. Either they do not know what they are talking about and that makes them not fit for purpose, or they do know and their recommendations border on the criminal.

I remember reading about drug trails flopped when they tried to manged with drugs normal blood sugar levels. It led to the idea that aiming for a low normal BS in diabetics was not a good idea. Somehow people keep mistaken naturally achieved results with medications achieved results. I remember discussing with Charles the benefits of statines use, and he brought up the study about healthy seniors in Japan who naturally had significantly lower total cholesterol levels than a general crowd. I thought it was not the proof that statines could improve health in anyone.

You are 100% right. The ACCORD study proved totally, ramming down BG numbers with meds proved so bad the trial ended early due to so many deaths.

As for Grashow, I reckon he has a few slates loose on the roof.

Actually, it is only in a world when educated specialists can't be trusted enough, CG way of choosing the most healthy behavior can be objectionable. When a person does his own homework as thoughtfully as he can it should give a satisfactory result.
Me and you and several others skeptics became who we are only because we have real health issues which could not be managed successfully by standard medical protocols and we have to take matters into own hands. When people take matters into own hands, they just can't stop. We are lucky - there are people who just can't be helped.