The Health Benefits of Salmon 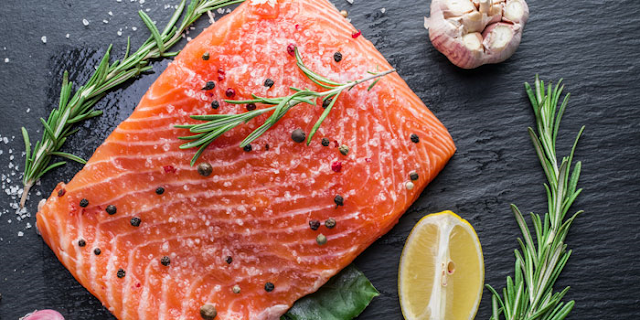 Fish and shellfish have been important in human nutrition since prehistoric times. Fish farming is an age old practice and the ancient Assyrians and Romans farmed fish in ponds. For thousands of years the Chinese have farmed fish using their rice fields during the periods when the fields are under water. Throughout history, fish and shellfish have been a source of economic power. During recent decades, per capita fish consumption has expanded all over the world.

In addition to eating fresh fish, techniques such as smoking and salting have been used to preserve salmon. To this day, smoked salmon is enjoyed as traditional fare in the cuisines of the Russian Federation, Britain and Scandinavia.

One of the main reasons fish consumption is increasing in the UK is the desire to eat more healthily. Of all the different types of fish, salmon has received the most praise for being a nutritional marvel. Salmon are described as anadromous; born in fresh water before spending a large portion of their lives navigating the open sea only to swim back to their birthplace in order to spawn. This extraordinary homing mechanism is said to be attributed to their olfactory memory (memory of smell). A reason why these intelligent, intuitive fish are considered a 'brain food'.

As with all fish consumption, sustainability is a major issue. Several varieties of salmon are sustainable however and you can find more information at msc.org. Salmon varieties are usually classified by the ocean in which they are located. In the Pacific they are considered part of the genus Oncorhynchus, and in the Atlantic they belong to the genus Salmo. There is only one migratory Atlantic species but five existing species of Pacific salmon: chinook (or king), sockeye (or red), coho (or silver), pink and chum. In the UK, the main source of salmon is from Scotland. Wild Alaskan salmon is also available.

Salmon flesh is typically pink but their colour can range from red to orange. The chinook and sockeye varieties are fattier than pink and chum, favourites for steaks and fillets, while coho falls somewhere in the middle. Pink salmon is primarily used for canned food. Chinook salmon are the largest and sockeye the smallest salmon. Due to the various species parameters, cuts and fillet sizes are variable.

Fish and shellfish are nutrient dense and salmon is no exception. It is an excellent source of high-quality protein, vitamins and minerals (including potassium, selenium and vitamin B12) but it is their content of omega-3 fatty acids that receives the most attention.

The most beneficial omega-3 fats occur naturally in oily fish as eicosapentanoic acid (EPA) and docosahexanoic acid (DHA). They are contribute to healthy brain function, the heart, joints and general well-being. The idea that eating fish may reduce the risk of heart disease began in the 1970s when it was noted that among the Eskimos in Artic Greenland (where high consumption of marine animals was the normal diet), heart disease was very low. In addition to heart disease, scientists now pose that fish consumption may lower the risk of many cancers as well as many chronic diseases including Alzheimer's disease, asthma, depression, diabetes, high blood pressure, macular degeneration, multiple sclerosis and rheumatoid arthritis.

Omega-3 is termed as an essential fatty acid because the body cannot synthesize it itself and must be obtained from the diet. To optimise your body's supply of essential fats rich in EPA and DHA, aim to eat oily fish - such as salmon, mackerel, sardines, herring and fresh tuna - at least three times a week.

Salmon can be purchased as either steaks or fillets, fresh, frozen, canned or smoked. Fresh salmon should have smooth, moist skin. If it has been sold whole, its eyes should be bright and clear, not cloudy or sunken. Rely on your sense of smell to tell you if the fish is fresh. If you cannot eat the fresh salmon within a couple of days, it's best to freeze it. Once frozen and thawed, it should not be refrozen.

Fish farms now contribute a large amount of salmon being consumed. The wild (free range) fish are superior in many ways to their farm raised counterparts. Wild salmon have also been found to have fewer pesticide residues than farmed, however studies fail to make a strong case that eating farm raised fish poses a significant safety concern. Smoked salmon is seen as a safe food to eat during pregnancy.

Follow the same food safety rules for salmon as you would with raw meat or poultry. Make sure it is cooked thoroughly by measuring it at its thickest point and cook for 10 minutes per inch. Properly cooked salmon will have firm but moist flesh that will flake apart.

Salmon lends itself to baking, barbecuing, poaching, steaming or grilling.

The words above taken from original article here

Method:
1. Heat the oil in a pan, season the salmon on both sides, then fry for 4 mins each side until golden and the flesh flakes easily. Leave to rest on a plate while you cook the spinach.
2. Tip the leaves into the hot pan, season well, then cover and leave to wilt for 1 min, stirring once or twice. Spoon the spinach onto plates, then top with the salmon. Gently heat the crème fraîche in the pan with a squeeze of the lemon juice, the capers and parsley, then season to taste. Be careful not to let it boil. Spoon the sauce over the fish, then serve with lemon wedges.

The above recipe is 3 grams carbs per serving.

I may also serve this salmon dish with some buttery mashed swede, but the choice is yours.

Salmon recipe looks very tasty and easy to do.

Many thanks for your comment Annie. I take it salmon may be on your menu plans soon !

Salmon is a little expensive, so a treat in our house once in a while. Looks a nice recipe.
Sue..

Thank you for your comment Sue. Yes, salmon is often a little more expensive - perhaps look out for any special offer prices your supermarket may have? If you do get the opportunity to try out this recipe I'm sure you will enjoy it.

We eat salmon frequently. For awhile, we were eating it once a week. I like mine with a teriyaki glaze.

Many thanks for your comment Amy - that "teriyaki glaze" sounds tasty!