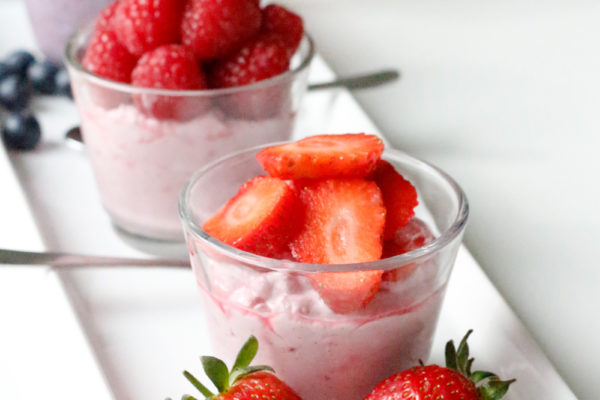 Many like to start their day with a yogurt in the morning ... or indeed perhaps enjoy one at lunch-time. Now if you are 'dairy free' you can still enjoy 'yogurt' just try one of these three versions by Fanny Lindkvist on Diet Doctor site.

She combines coconut cream with one of these three low carb fruits ... strawberries, raspberries or blueberries - so take your pick, which one is your favourite?

For recipe and instructions use this link here

Strawberries were once available in Britain for just a brief period during the summer, strawberries are now a year-round fruit, thanks to imports from warmer climates. However, the varieties grown for export tend to be chosen for their ability to withstand transportation, rather than for their texture or flavour, which often results in a less tender berry with an unremarkable taste. The fact that strawberries intended for export are picked before they're properly ripe, means that their flavour is further impaired; strawberries don't ripen after being picked.

To enjoy strawberries at their fragrant, juicy and flavourful best it's worth holding out for the British season - if you want to eat them super-ripe, pick-your-own is best.


Availability:
Imports are available all year round, but the British season runs from late May to early September. Strawberries are easy to grow in the garden or in a pot on a sunny windowsill - just remember to protect them from birds when the fruits appear!


Choose the best:
Look for plump, shiny, tender berries, with a good, bright colour and a sweet aroma, preferably with their leafy green calyx and stalk still attached. Avoid mushy or mouldy berries.

If you're buying a punnet, check that the underside isn't stained - that means the lower level of berries has been crushed. Large strawberries tend to have a higher water content, so are less flavourful - go for small to medium-sized ones.

Elsanta is one of the most common strawberries available - it is sweet, but has a high water content, giving it a crisp texture. For flavour, sweetness and a softer texture, look for other British varieties, such as Ava, Florence, Alice and Rhapsody.

Also look out for the wild fraises des bois, from France. Small, with a conical shape, they have a wonderfully intense aroma and flavour.

Prepare it:
Strawberries become mushy quite quickly on contact with water, so wash very briefly, hull (i.e. remove the calyx and stalk - on fully ripe strawberries this can be gently pulled out quite easily; otherwise it should be cut out with a small, sharp knife), then keep whole, half or quarter, as required.

Store it:
Arrange strawberries on a layer of kitchen paper on a plate, so that they don't crush each other, and store them in the fridge. Take them out of the fridge an hour before eating, so that they're room temperature. Never wash before refrigerating them, as they'll go soggy. Eat within a couple of days of buying or picking.


Raspberries, a member of the rose family, have a wonderfully intense, sweet taste, and many consider them to be the finest flavoured of all the berries.

Raspberries grow well in cool, damp climates, and the red varieties, such as Heritage and Malling Jewel, are the most commonly sold, though you can also find black, yellow and golden types.

They are an essential ingredient in the classic English dessert, Summer pudding, and their flavour combines well with that of other berries.

Availability:
Late June to early September. If you've got a garden or allotment, raspberries are quite easy to grow.

Choose the best:
Look for bright, evenly coloured and plump berries, with no mushy or mouldy examples. If you're buying a punnet, check that the underside isn't stained - that means the lower level of berries has been crushed.

Avoid raspberries with their hulls still attached; that indicates that they were picked before they were ripe, so their flavour will be tart.

Prepare it:
As raspberries are very delicate, try not to wash them unless absolutely necessary. Just pick off any bits of stalk or leaf. If they must be washed don't put them directly under the flow of the tap, as they'll disintegrate. Gently pat them dry with kitchen paper.

Store it:
Arrange them on a layer of kitchen paper on a plate, so that they don't crush each other, and store them in the fridge. Take them out of the fridge an hour before eating, so that they're at room temperature. They are best eaten on the same day they were bought or picked.

Blueberries, in the popular press, blueberries have reached superstar status in terms of their unique health benefits, and with flavours that range from mildly sweet (cultivated) to tart and tangy (wild), blueberries are nutritional stars bursting with nutrition and flavour while being very low in calories.

Blueberries are the fruits of a shrub that belong to the heath (Ericaceae) family. They grow in clusters and range in size from that of a small pea to a marble. They are deep in colour, ranging from blue to maroon to purple-black, and feature a white-gray waxy "bloom" that covers the berry's surface and serves as a protective coat. The skin surrounds a semi-transparent flesh that encases tiny seeds. Blueberries are at their best from May through October when they are in season.

Cultivation of blueberries was widespread among the Native American tribes throughout North America. European colonists learned about blueberries thanks to these Native American traditions and brought blueberry species back to Europe. Yet commercial cultivation of blueberries in Europe has been a relatively recent phenomenon limited to the 20th and 21st centuries. Thanks to increasing cultivation in the Southern Hemisphere — including South American countries such as Chile, Argentina, and Uruguay as well South Africa, New Zealand and Australia — fresh blueberries are now enjoyed throughout the year on many of the world's continents.

How to Select and Store:
Choose blueberries that are firm and have a lively, uniform hue coloured with a whitish bloom. Shake the container, noticing whether the berries have the tendency to move freely; if they do not, this may indicate that they are soft and damaged or moldy. Avoid berries that appear dull in color or are soft and watery in texture. They should be free from moisture since the presence of water will cause the berries to decay. When purchasing frozen berries, shake the bag gently to ensure that the berries move freely and are not clumped together, which may suggest that they have been thawed and refrozen.

Before storing remove any crushed or moldy berries to prevent the rest from spoiling. Don't wash berries until right before eating as washing will remove the bloom that protects the berries' skins from degradation. Store ripe blueberries in a covered container in the refrigerator where they will keep for up to 3 days. If kept out at room temperature for more than a day, the berries may spoil.

Ripe berries can also be frozen, although this will slightly change their texture and flavour. Before freezing, wash, drain and remove any damaged berries. To better ensure uniform texture upon thawing, spread the berries out on a cookie sheet or baking pan, place in the freezer until frozen, then put the berries in a plastic bag for storage in the freezer.

Tips for Preparing Blueberries:
Fresh berries are very fragile and should be washed briefly and carefully and then gently patted dry if they are not organic. Wash berries just prior to use to not prematurely remove the protective bloom that resides on the skin's surface. If you know the source of either wild or organic berries try not to wash them at all.

When using frozen berries in recipes that do not require cooking, thaw well and drain prior to using.

Blueberries retain their maximum amount of nutrients and their maximum taste when they are enjoyed fresh and not prepared in a cooked recipe.

These three fruits are among my most favourite of the lower carb fruits, and feature quite regularly in my menu plans. I hope you may have enjoyed reading a little more about them, and will try out one of these yogurt ideas soon... don't forget to add coconut cream to your shopping list!

All the best Jan
Posted by Lowcarb team member at 11:21

I totally agree that fresh strawberries are the best, we had some for a few years but they ended up dying out and we didn't plant anymore this year. It is wonderful that we can have fresh fruit all year long now :) Growing up we had a huge batch of raspberries growing out back of our home, my mom would go out each day and pick them for our meal that night. Great tips on how to store them to keep them fresher longer, and I didn't know about checking the blueberries for freshness. Great article, and my favorite is still strawberries :)

Blueberries, Greek yogurt and a sprinkle of cinnamon is my favourite breakfast Jan 😃

Very interesting, I didn't realize that about the large strawberries having a larger water content, I always try to get bigger ones, now I won't.

Hello, looks delicious. I love both strawberries and blueberries. I wish they were available year round here too. Have a happy day and new week ahead!

i love all berries and especially strawberries and blueberries. and they are so perfect for decorating treats for the 4th of july!!!

I think I could live on blueberries...if only I could grow enough. Another lovely recipe and informative post.xxx

I love the pudding, yummy.

I do love these summer fruits! I was very glad to pick three strawberries from my garden yesterday!

Thanks for the info on the other strawberry varitities, I'll look out for those.
Lisa x