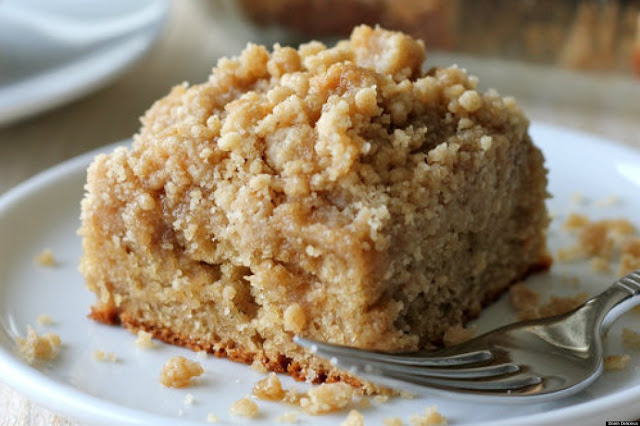 Can you resist cake? I do enjoy a slice occasionally, and this low carb recipe does go nicely with a cup of tea ... although you may prefer coffee!

Instructions
1. Pre-heat oven to 350 degrees. Butter a 9-inch spring-form cake pan.
2. Make the crumb topping: In a small bowl, combine the sugar substitute, almond flour, coconut flour, pecan nuts, salt and cinnamon. To the dry ingredients add I thinly sliced cold butter and cut in the butter until the mixture resembles coarse crumbs. Set aside.
3. Cake batter: In a large mixing bowl, combine the almond flour, sugar substitute, spices, baking powder, baking soda, sea salt. In a small bowl, stir the cooled melted butter, sour cream, and eggs until they are well combined. Fold the butter & sour cream mixture into the batter dry ingredients. Mix until well incorporated. Spread the batter into the spring-form pan and sprinkle the crumb topping over the cake.
4. Bake the cake for 45 minutes to 1 hour, or until the crumbs are lightly browned and until an inserted toothpick comes out clean.
5. Cool the cake for 20 minutes before slicing and serving.

If you need help with weight/measurement conversion, look here 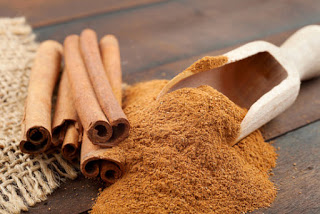 Did you know ... Cinnamon is a popular spice often associated with baked treats, cereals and smoothies. However, you may not have considered that the teaspoon of cinnamon that you add to your baked treats may be doing you more good than you realized. Studies have shown that cinnamon could assist with boosting brain function, fighting cancer, aiding in digestion, supporting weight loss and fighting diabetes.

You may have noticed that this recipe does not contain coffee! Well, the reason being is that 'The American Coffee Cake does not contain coffee. It's traditionally a cake which is to be served alongside coffee. It is agreed that the concept of coffee cake originated in Northern and Central Europe sometime in the 17th century. The countries in these areas baked traditional sweet yeast breads, so when coffee was introduced to Europe, these cakes were the perfect accompaniment. When the German, Dutch and Scandinavian immigrated to America, they brought with them their wonderful recipes.

Originally more bread like, coffee cakes have evolved and changed. They are still a relatively plain cake, perfect with that cup of coffee, but now fruits, cheese, nuts, sour cream or other creams are used in this wonderfully moreish cake. It is a true taste of American baking!'

... would you like coffee or tea with your slice!

A variety of recipe ideas are within this blog, and not all may be suitable for you. If you may have any food allergies, or underlying health issues please take these into account. If you are a diabetic and not sure how certain foods may affect your blood sugars, test is best, i.e. use your meter.

All the best Jan
Posted by Lowcarb team member at 11:02

It looks delicious, even though I don't like cinnamon. That crumb topping looks very appetising.

Looks great. The coffee is on.

Hello, I love anything with cinnamon. THis cake looks delicious. Have a great day and happy weekend!

oh, I hate anything that looks like it should be eaten all in one sitting.

I love all things cinnamon.

I love the taste of cinnamon.
Thanks for this delicious sharing.
Have a nice weekend
Maria from
Divagar Sobre Tudo um Pouco

I've had it in a very similar way before. It's good!

Unsweetened iced tea is my choice. I do not leave out the sugar for a diet. I think tea tastes wonderful. The sugary drink makes me feel ill.

Tea for me. And someone else can have my piece of cake.

It certainly does look delicious!

Oh my, this just might have to be my next baking project.....thanks!

this looks and sounds perfect!

This sure looks yummy! I'll have tea, if you don't mind! ♥

What a great cake, something that I will definitely be making. Thank you for visiting my blog and leaving such lovely comments.

That cake looks delicious. I make something similar, but with thin-sliced apples and nuts in it. But I've never tried using almond flour before. Maybe it's time I tried?

NOTHING better than something with cinnamon on it. Love coffee cake. I made a banana bread with cinnamon in it yesterday. This looks yummy. Thank you for always coming by with such great comments.

I have been on a big cinnamon kick lately. Odd for me this time of year (usually happens in the fall). This recipe sounds delicious! Yum!
~Jess

I need to try out the almond flour

I surely wouldn't say "No" to a slice of that cake right now. L)

this looks so good and i love coffee cake, but with tea please!!!

Happy Week to you,
A ShutterBug Explores,
aka (A Creative Harbor)

Yummy!! Thank you!!! Mom says thanks too!