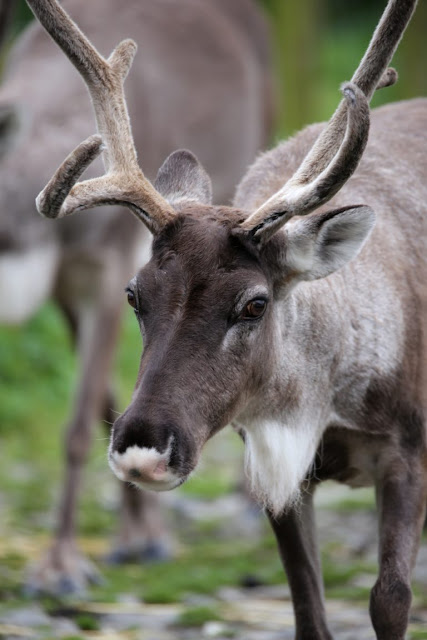 Did you know "a reindeer is a reindeer everywhere in the world apart from North America where it’s known as a Caribou.

You can find reindeer (or caribou) to the north in the arctic and subarctic regions of the planet. They like to move around a lot and rarely stay in one place for very long. They have been known to cover up to 3,000 miles in a year…that’s roughly the distance from Folly Farm  in Pembrokeshire, UK to Toronto in Canada!

It’s not really much of a surprise that Reindeer have very thick coats. In fact, they have a double layered coat designed to keep them really cosy in chilly temperatures.


Conservation:
Although considered ‘least concern’ there are efforts to maintain the population further. The ‘WWF’ charity for instance, work with local people in order to find ways of reducing their impact on the environment through forestry, mining and reindeer herding. Plus, Santa’s got eight and they’re really well looked after!

Fun facts about reindeers:
Reindeer antlers are found on both males and females.
Their sense of sight and hearing aren’t brilliant, relying mainly on their sense of smell.
When they walk they click…it’s a tendon in their foot passing over a bone!
The first known written account of reindeer in association with the legend of Santa Claus occurred in 1821 in a booklet called ‘A New Year’s Present’.

Reindeer questions and answers:
So where do reindeers live?
Domesticated reindeers are mostly found in northern Scandinavia, Russia, and Iceland where they were introduced by humans in the 18th century.

What do they eat?
They’re vegetarians so that means they don’t eat meat at all just anything green. Mainly lichen, fungi and leaves.

Can they run fast?

They certainly can. They have been recorded at speeds of between 36-48mph. The fastest man on the planet Usain Bolt runs at 27mph. How fast can you run?"

The above picture and words from here 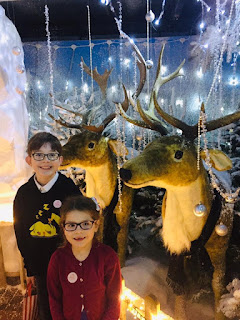 two of our grandchildren having fun at Santa's Grotto,
the reindeer look friendly 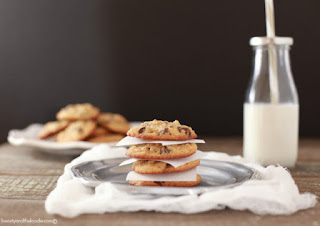 All the best Jan
Posted by Lowcarb team member at 14:21

...and here I thought that they did. Merry Christmas.

I thought that being reindeer they would share in any and all of 🎅's cookies and milk at each of his stops :)

I'm sure there may be some reindeer that would give these biscuits a try! They are delicious:)
The grandchildren always make sure to leave at least one carrot out for the reindeer, and surprise, surprise … they always get eaten!

Christmas can be such a magical time ...

If Rudolf the Reindeer came by at Christmas I certainly would offer him cookies and chocolate - whatever goodies :) BTW There are about 200 000 domesticated reindeer in the Finnish Lapland.

Well done! I didn't know a lot of that. Merry Christmas!

I didn't know that caribou were in fact reindeer, you learn something new every day. Lovely photo of your grandchildren, I really miss having young children around at this time of year.

Making a few items today, but I am mostly finished with my holiday.Hope you have a lovely one.

Beautiful things - and there are even a few (introduced) in Antarctica.

What a lovely, interesting post, I did enjoy it and learnt a few things about reindeer too!xxx

Sweet grandchildren photo with the 'friendly reindeer' ~ and wonderful post ~

Happy Holidays to you,
A ShutterBug Explores,
aka (A Creative Harbor)

what a sweet photo of the grandchildren....and some sweet looking cookies!!!

They won't pass up a carrot, mind you.

I spotted that Jan. The Reindeer aren't real but the kids are.

Great post.
Your grandchildren are adorable and have a wonderful smile.
I wish to you and to your loved ones, a Merry Christmas and a Happy New Year, full of health, joy and love.
A warm and big hug
Maria de
Divagar Sobre Tudo um Pouco

Cute post, and the grandchildren look lovely and will enjoy those cookies provided the reindeer don't get to them first.

I knew that reindeer were called caribou but some of the other facts we new to me. Great post and I would be glad to try one of those chocolate chip cookies. :)

They are a beautiful animal. I have seen them twice in my life, once a domestic herd in Germany years ago and the other time in May when they were wild in Denali, Alaska.

They are so pretty and no I didn't know that a caribou was a reindeer.

Had no idea they traveled that many miles in a given year. Interesting info. The low carb...whew good to know, lol. Cute picture of the kiddo's.

Aha, well I knew that a caribou was a reindeer, eh. Those are some fun facts about reindeers. Of course, well, evidently, you can get high by drinking reindeer urine. Santa flying about in the sky....

Good article! I made cookies and chocolates this year, and my friends really enjoyed them, especially the peanut cups which were delicious. Have a great weekend, Valerie

A sweet photo of the grandchildren with the model reindeer. Some interesting facts about reindeer herds. I've seen domesticated reindeer locally at Christmas time, but I would rather
see them in their natural environment. All the best Jan. Wishing you and your family a happy Christmas.

What a lovely photo of your grandkids! They are so cute.

What a great post Jan! I love the picture of your Grand children! Big Hugs and I hope you had a great Christmas!