Is the end in sight for bucket-sized sodas?

The cold, sugary caffeinated goodness of a big cup of Coca-Cola so delights Chris Alexander he quips it helps soothe his post-traumatic stress disorder.
"If I get agitated, I'll have an incredible urge to get a Coke," says Alexander, a 37-year-old US Army veteran who served several tours in Iraq.
"I'll go get a 48-ounce Big Gulp every once in a while. It's just convenient. If I'm working a lot of hours, I'll just grab a giant one and take it to the office and let it sit there for a while."
Forty-eight ounces (1.42 litres) of soda has more calories than an eight-ounce (227g) T-bone steak, and 5.5 ounces (156g) of sugar, and Alexander admits he gains weight if he slurps the sodas but lets his exercise routine slacken.
But in convenience stores across America, one can buy even larger drinks - one of America's largest convenience store chains, 7-Eleven, sells a 50-ounce (1.5-litre) "Double Gulp" soda, and has at times sold a 64-ounce (1.9-litre) soda.
"They're quite popular," says Margaret Chabris, a spokeswoman for 7-Eleven, which has 7,800 convenience stores in the US.
"People are quite thirsty and want a large-sized soda." 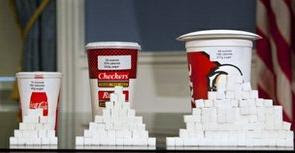