Looking back I can remember many happy visits to the circus. There were many varied acts for all to enjoy the trapeze .. high wire .. jugglers .. elephants .. horses. In these modern times the circus acts may have changed, but one act that has always been there for everyone's enjoyment is The Clown!


I can remember laughing so much at their antics, they had the audience roaring with laughter and at times holding our sides ... they were aching too much from all the fun! Our grandchildren have visited The Circus too, and they now know the magic that is the Big Top.

I didn't know until I read this aticle below that the first week in August is International Clown Week ... yes, it's true a whole week for clowns. You may have already read this article which gives fifteen fascinating facts about clowns.

"Every day is something day, but forget clown day, because clowns have an entire week, from Aug 1 - 7 every year. It was even written into American law by President Nixon. To celebrate, here are 15 facts about funny men!

1 - The word clown is believed to come from the Icelandic word klunni, meaning a clumsy person.

2 - The earliest record of the word clown dates from around 1560.

4 - Grimaldi was the first panto clown to wear white face make-up instead of a mask.

5 - The full name of Krusty the Clown in The Simpsons is Herschel Shmoikel Pinchas Yercham Krustosky. He's voiced by Dan Castellaneta.

6 - The declaration of International Clown Week was passed into US law by President Richard Nixon on August 2, 1971.

7 - Traditional clowning centres on the relationship between the 'whiteface' (the straight man) and the 'auguste' (foolish or mischievous clown).

8 - All straight man/funny man comedy double acts, such as Laurel and Hardy, are derived from circus clowning.

10 - Coulrophobia describes the fear of clowns.

11 - The world's oldest clown society, Clowns International, was founded in 1947.

12 - The first killer clown in fiction appeared in the 1892 Italian opera Pagliacci.

13 - Johnny Burnette had a hit with Clown Shoes, written by PJ Proby.

14 - Ronald McDonald was first played by Williard Scott in a 1963 TV commercial.

Talking of clowning around why not make some happy and healthy funny faces to eat, the grandchildren love doing this. This one below is a good one ... but just cut up pieces of finger type foods like red peppers, carrots, cucumbers, nectarines, blueberries and let their imaginations run wild ... it's so much fun! 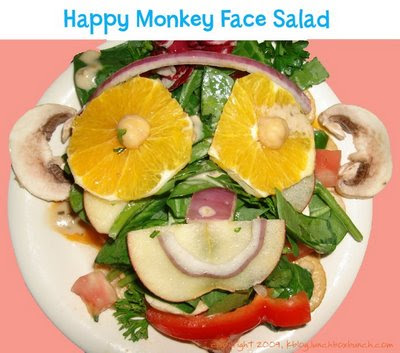 I always think it's great to introduce foods in a fun way and if certain foods are rejected don't worry, because next time they may give them a try. Eating can be healthy and so much fun, and it is the school holidays so this could be a great way to spend time with your children, nieces, nephews, grandchildren. Of course who says you have to be young to do this 'young at heart' is good too!

Have fun clowning around ...

All the best Jan
Posted by Lowcarb team member at 11:11

Fun post, I did not know about the Int'l Clown week. The clown face salad is great, I am sure the children would enjoy eating it too. Thanks for sharing, have a happy new week!

Fun post! I had no idea that Krusty the Clown had such a long and interesting name. You learn something new every day.

Very interesting to read all those facts about clowns. The salad looks great too

A clowns slapstick comedy routine is a great favourite for all to watch.
Ted

Hi. I am new to your blog. This Clowns post caught my eye. Having young children I do explore different foods with them. Not always successful but it is important to try. this type of happy face recipe is a good idea. Another idea just let them make colourful patterns and then eat them. My kids love to do this.

I always learn something every time I visit. Thank you.

Thanks for visiting my blog and for your kind comments.

Jan, your granddaughter is absolutely the cutest little thing. I'll bet you are so proud of her.
Was very interested in your statin video. I am getting more and more concerned about these drugs. My doctor has me on one of the old statins. I would never take Lipitor.

I have a touch of coulrophobia but I like paintings and sculptures of clowns. Just don't want to be around folks in clown costume and makeup. And I'm sure I would love a clown salad.

I definitely have Coulrophobia. They scare the hell out of me LOL I didn't know about half of those facts. Very interesting, Jan.

That salad is really cute though :)

Thanks for the education on clowns - interesting! That salad is so cute - if my son was still little, I'd definitely make it for him!

Clowning around? My favorite. Love, love, love the salad.

Thank you ALL for your comments ...

Eileen - clowns week was new to me too - and they have a whole week dedicated to it! Yes the salad is a good fun idea for children. Have a good week.

Martha - it is interesting to read about different things, and blogs are a great way to do it. Have a good week.

'CGP' - many thanks for your comment. Glad you liked the post, (and salad), it is good to read about different things. Have a good week.

Ted - thanks for your comment. I always enjoyed the 'slapstick' type comedy - the timing for it always has to be good too! have a great week.

Jane - a warm welcome to the blog, and many thanks for your comment. I do like the idea of letting young children explore different foods. Perhaps it may not always be successful but I agree it is important to try. Like your idea too about letting them make colourful patterns and then eat them. Sounds fun to me! Do hope you have a lovely week with your children.

Gail - we always try to give a good mix of articles, something for everyone. Thanks for your kind comment, and I will be visiting your blog later ... 2791 that's a good number !!

Roses and Lilacs - thanks for all your comments. Agree with you, we think our grand-daughter is cute too! Glad to hear you are finding the various statin articles of interest. Thanks for commenting here on the clown post. Have a good week.

'NC' - not everyone likes clowns, but interesting to hear you like sculptures and paintings of them ... many can be most colourful. That salad is a fun idea ... have a good week and a good break.

Rue - I didn't know all that about clowns either ... it is good to read a variety of articles. Like you many others are not keen on clowns. Glad you liked the salad. Have a great week.

Amy - thanks for stopping by. Glad you liked the article, and yes youngsters do like fun foods... but good presentation and how food looks is important for any age group. Have a great week.

Ivy - thanks for all your comments. Yes ... clowning around I can imagine you loving this post LOL!. Have a great week.

l really did. Thanks!