Know your onions - some health benefits ! 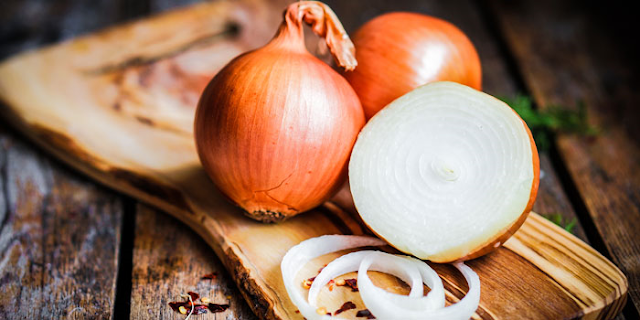 An introduction to onions...
The humble onion is found in every kitchen, but its curative powers make it an important medicinal plant too. Like garlic, it is a member of the lily family. There can be no doubting the power of the juices contained in onions; anyone who has ever sliced one and shed a tear is only too aware that they hold something special. Quite apart from its medicinal properties the onion is simply delicious. It forms the basis of so many dishes - whether raw, sautéed, baked, steamed or boiled, that it would be difficult to imagine the cuisine of any country without it.


Ancient healing...
Onions were historically as a preventative medicine during epidemics of cholera and the plague. They were apparently eaten by Roman emperor Nero as a cure for colds, and its reputation has made onions a popular component in the diets of many countries.

...The onion's revenge:
The smell of onions can be a problem, both on the hands and on the breath. After chopping onions, try rinsing the hands with cold water, rubbing them with salt, rinsing again and then washing with soap and warm water. To remove the smell from breath, eat a few sprigs of parsley or an apple to help conceal the odour.

Nutritional highlights:
More than just a tasty culinary plant, the onion contains natural sugar, vitamins A, B6, C and E, minerals such as sodium, potassium, iron and dietary fibre. In addition, onions are a good source of folic acid.

The reason that the onion is so much more active in its raw state than when cooked, is that it contains a variety of organic sulphur compounds, contained in a volatile oil, that provide the health benefits. These are partly destroyed by heat. When eaten raw, its juice can act as an irritant and some people find it difficult to digest. Those who are not tempted by the idea of eating raw onions can follow simple cooking methods that may make them more palatable. For people with sensitive stomachs, this is a far suitable way to enjoy the healthy benefits of onions. Onions baked in their skins, in a similar way to baked potatoes, are also delicious. This method of cooking keeps all the goodness inside, but the resulting flavour is milder and more aromatic than that of raw onions.

... Red onions, rubbed on warts or verrucas are thought by some to encourage them to disappear. In some Arab countries onions mixed with salt and pepper are applied to the scalp as a remedy for hair loss.

Research:
Although not nearly as valued a medicinal agent as garlic, onion has been used almost as widely. Onions have been used in folk medicine for the relief of coughs, colds and catarrh, especially asthma, but more recently some of their curative properties have been attributed to a compound called allyl propyl disulphide, which is thought to have a similar effect to insulin in balancing blood sugar levels. This does not mean that the onion can be used as a substitute for insulin therapy; but it may be of help to those who suffer from hypoglycaemia. If you suffer from hypoglycaemia consult your doctor if you have any nutritional queries.

How to select and store:
Globe onions should be clean and hard and have dry, smooth skins. Avoid onions in which the seed stem has developed. Also avoid those that show signs of decay. Onions should be stored at room temperature, away from bright light and in a well ventilated area. Those that are more pungent in flavour such as yellow onions, will keep longer than those with a sweeter tastes such as white onions, since the compounds that produce the sharp taste are natural preservatives as well. All onions should be stored away from potatoes, as they will absorb their moisture and ethylene gas, causing potatoes to spoil more easily. Do not store cooked onions in a metal bowl or storage container as this will cause them to discolour. Freezing chopped onions will cause them to lose much of their flavour.

Cry me a river...
...the compound allyl sulphate which is produced when an onion's ruptured cells are exposed to air is responsible for producing tears. To reduce the production of this compound, chill the onions for half an hour or so before cutting to reduce the activity of the enzyme.


Onions feature as the basis of many classic recipes worldwide.
Article above taken from nutritionist Jo Lewin here

All the best Jan
Posted by Lowcarb team member at 10:47

I love onions, nothing nicer than a cheese and onion sandwich at lunchtime. There was a time when I had to leave onion out of anything I made as none of the family would eat it but they've all come around to it eventually, thank goodness.

Great post and information. Hubby and I enjoy cooked onions in various dishes. They seem extra sweet when they are sauteed, yum! Have a happy day!

Shallots are good in a beef bourguignon

i don't think there is anything i cook, that i don't start with onions. i only use sweet onions and i have just started using shallots instead of red onions. they are much better!!!!

Thanks for your comment Jo, cheese and onion do go well together. Glad that all the family now enjoy onions.

So lovely to receive your comment Jenny - it gave me an idea for the Beef Bourguignon post. A great low carb favourite.

Many thanks for your comment Debbie, there are always onions in our house, they just add a lovely taste to so many meals. I do agree shallots are lovely.

In some Arab countries onions mixed with salt and pepper are applied to the scalp as a remedy for hair loss.
Must remember that it could be handy.

Many thanks for your comment Ben. Apparently it is the onion juice that can help ... have a look here for more details.

Yum,yum,yum ... I knew you would!
Thanks for your lovely comments Ivy, always good to read them.

I buy huge bags at a time. Yummers. Last night it was onion gravy over mash. So yum. Thanks for your comments, too.

I've seen pictures of your huge bags of onions Ivy !!!

I love onion gravy over some low carb mashed swede - it tastes good.